Strife in the fast lane: ADOT issues ‘Notice to Proceed’ on 3-year I-10 Broadway Curve Project

Have you had it already with big, slow-moving trucks, barriers, narrowed lanes and freeway closures on Interstate 10 in Tempe and West Chandler?

Then you’d better take a sedative because Arizona Department of Transportation is just getting warmed up on a three-year project from Loop 202 around the Broadway Curve, past Phoenix Sky Harbor International Airport, over the Salt River and to the Interstate 17 split southeast of downtown Phoenix.

But it will be worth it. The result will be more lanes and better traffic flow, especially on the curve and near the I-10 interchanges with U.S. 60/Superstition Freeway and State Route 143/Hohokam Expressway.

ADOT this week issued the formal Notice to Proceed to Broadway Curve Constructors to begin construction in earnest on the 11-mile Interstate 10 Broadway Curve Improvement Project.

A new project video in English and in Spanish provides a glimpse at what motorists and others in the region can expect when construction is completed in late 2024. 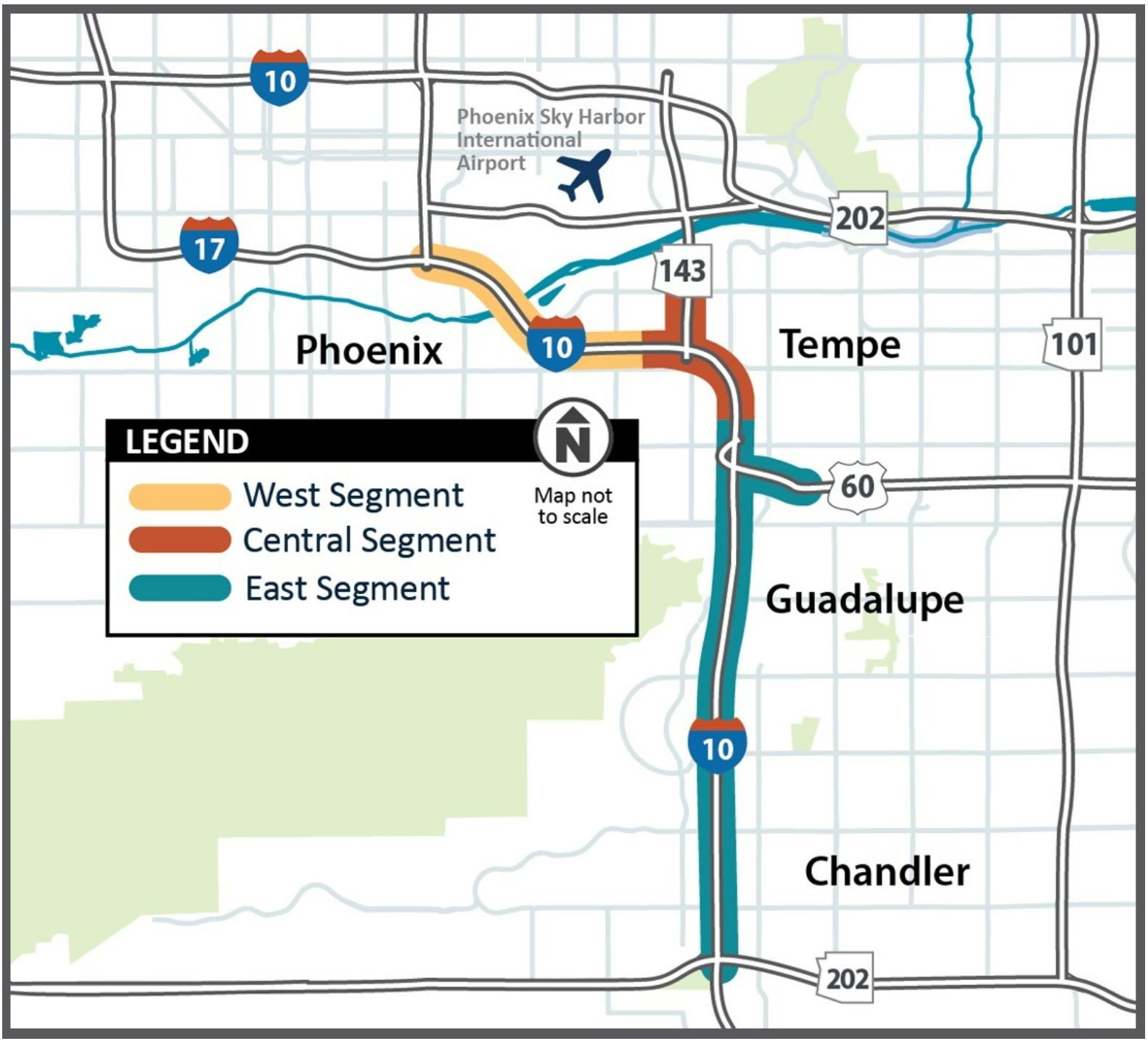 In coming weeks, ADOT anticipates construction beginning on median concrete-barrier walls in the west segment, and in the east segment where native plants and trees will be salvaged so they can be transplanted when construction is complete.

Most of the immediate construction will occur in the east segment on eastbound I-10 from Baseline to Ray roads, where crews will begin to do earthwork, modifying catch basins and extending storm-drain pipes. I-10 will be widened by one lane. Sound walls will be built where warranted. The Guadalupe Road bridge over I-10 will be widened.

Crews will pause work that requires highway closures during the holiday season from mid-November to early January 2022. Some construction activity that does not directly impact motorists will continue. ADOT anticipates all improvement work on eastbound I-10 from Baseline to Ray being complete next year.

Beginning in 2022 and continuing through 2023, work will include new bridges over I-10 at 48th Street and Broadway Road; new Collector-Distributor lanes from Baseline Road to 40th Street; widening I-10; reconfiguring ramps; and widening or constructing bridges, including the two I-10 bridges over the Salt River.

A third phase of work is set for late 2023 through summer 2024, and will significantly impact SR143 and I-10 through the Broadway Curve. With Collector-Distributor road construction complete, crews will build the new direct connections from I-10 to SR 143. Drivers will use the new Collector-Distributor roads as an alternate route while sections of I-10 remain under construction.

The final phase of work is scheduled in 2024 from summer through fall, with the focus on finishing lighting, signage and landscaping; putting down the final road surfaces; and lane striping.

ADOT encourages everyone who lives, works and drives in the project area to stay ahead of the curve by downloading its free mobile app and signing up for email alerts for traffic and project updates. Information is also available at i10BroadwayCurve.com.

The I-10 Broadway Curve Improvement Project is identified in the Maricopa Association of Government’s Regional Transportation Plan, funded by a half-cent sales tax approved by Maricopa County voters in 2004 through Proposition 400. MAG identified the need for the project to reduce travel time on I-10 during peak hours, improve airport access, support ridesharing and transit, and prepare the region for future growth projections.

Schedules are subject to change based on weather and other unforeseen factors.

Wrangler News Staff
Previous articlePrint Edition – October 16, 2021
Next articleThey’re not horsing around at City Hall: Action may bring down wall in bridle-path dust-up