‘IT WAS LIKE A BOMB WENT OFF’ . . . 4 men burned in explosion that blew roof off print shop expected to survive

Karen Goetz was going about her work as office manager at Arizona Community Church on the morning of Aug. 26 when a thundering boom startled and shook her.

“It was like a bomb went off or something,” she said.

“We thought maybe it was a natural-gas explosion somewhere because it was like an atmospheric thing, where it changed the air pressure. It was strange. We all ran outside to see what it was because it felt like it was fairly close.”

It was. A half-mile south, an explosion had blown the roof off of Platinum Printing in a strip center at the northeastern corner of Ray and Rural roads in West Chandler. Two young men were critically burned in the blast, two others were seriously burned. It will be a long road, but all four are expected to make a full recovery, according to their physician.

Brothers Dillon and Andrew Ryan, co-owners of Platinum Printing, and Parker Milldebrandt, a lifelong friend of the Ryans who works at the shop, are among the victims. All three were in the shop at the time of the explosion.

The fourth victim is Glenn Jordan, who owns All-American Eyeglass Repair, a couple of suites west of the print shop in the strip center. It is not clear if he was in the print shop at the time of the blast.

While expected to make full recoveries, the four face heavy medical bills during a lengthy process to get there.

GoFundMe pages have been set up to help the four victims of the print-shop explosion.

Milldebrandt, 29, was placed in a medically induced coma and still was heavily sedated for pain management Sunday night, according to an update on his GoFundMe page. His first operation will be early this week, the update says. He and his wife, Sierra, are expecting their first child, a daughter, this week.

Jordan and his wife, Cindy, have a daughter.

The Bureau of Alcohol, Tobacco and Firearms has sent a response team to work with Chandler police to investigate the cause of the explosion. CPD said it does not suspect a criminal act. A gas leak was discovered under the parking lot but cause of the explosion has not yet been determined.

“I was coming up the hallway and I heard this loud thing, like somebody was at the door, but it was like the door was exploding or something. When I looked, there was nobody at the door,” Goetz said.  “It sounded like the door moved on its own and then shut again. Then, (a coworker) came from the building across the way and … she said, ‘Did something funny happen a few minutes ago?’ I said, ‘Yeah.’

“It definitely moved all the doors that were unlocked. We walked outside but couldn’t see anything that looked like it was on fire or anything like that. … We still didn’t see anything but there were tons of fire trucks going by. … I was really, really glad it wasn’t the library or the preschool. There’s a lot of stuff in that shopping center.”

Corona del Sol, just a few blocks north of the strip center, was not impacted, according to Megan Sterling, executive director of community relations for the Tempe Union High School District. She said that the blast was close enough that it was felt on campus but that there was not a disruption to the school day or the need to evacuate.

Corona principal Nathan Kleve, however, sent an advisory to families saying that the TUHSD safety team had reviewed information and continued to monitor the situation.

The situation was elevated to a second-alarm hazardous-materials response that brought 50 pieces of emergency apparatus and more than 100 firefighters to the scene, according to Chandler Fire Battalion Chief Keith Welch. Units from Chandler, Mesa, Tempe and Phoenix fire departments responded, as did crews from Southwest Gas. 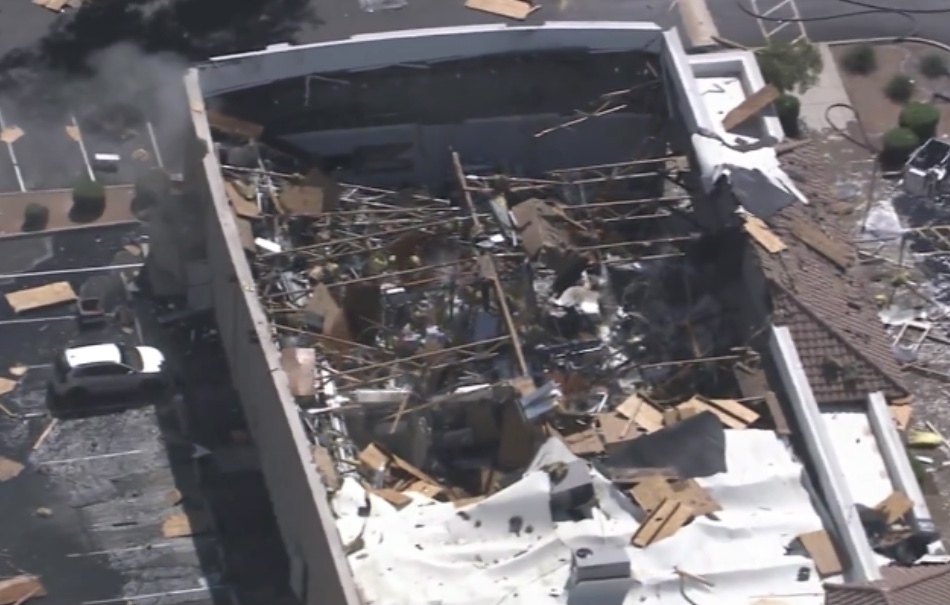 An aerial view in the aftermath shows buckled walls and a debris-filled crater inside Platinum Printing, 4940 W. Ray Road, Suite 1. Still images pulled from a video shot by Matt Lee, who was in line at a nearby coffee shop at the moment of the explosion, show debris rising about 80 feet into the air. Rubble and broken glass were sent as far as 100 yards across the parking lot.

Welch said that first responders found a natural-gas leak under the strip-center parking lot, however officials are not prepared to say what caused the explosion. That remains under investigation, he said.

“We are starting the investigative process,” Welch said. “It’s going to take a while to figure it all out.”

Gary McKay, owner of McKay’s True Value, 4939 W. Ray Road, directly across the street from the explosion, needed a few moments to figure it out for himself.

He said the noise reminded him of the time a vehicle drove through his front door.

“There was a boom that shook the building,” McKay said. “It was almost like when that car ran into the building, but even worse. It sounded like something landed on our roof, and so I immediately ran up here to the front. Then I ran and looked out the back door and there was nothing. I was standing outside and a customer was coming up to the store and said something happened across the street and that he saw the debris flying in the air. And then that’s when we found out that the building had exploded.”

A woman who works at a fabric store across the street from the blast, who did not want to be identified, said that she felt the impact of the explosion reverberate in her chest.

“A lot of dust fell from the ceiling and our door blew open. The building and the windows shook,” the woman said.

Chandler Sunset Library, next door to the print shop, suffered damage inside from the force of the explosion, according to Welch.

The library remains closed until further notice, city officials said. The public may continue to access library services, including the catalog, downloadable ebooks, and other resources 24/7 online at chandlerlibrary.org. Library patrons may return checked out items to any of the library’s three branches.

Maxwell Preschool Academy, at the opposite end of the center, was evacuated. None of the children were injured.

In all, approximately 15 businesses and 25 homes in the neighborhood were evacuated as a precaution, according to Welch. Power also was turned off in the area for about a half hour. Traffic on Ray and Rural near the scene was closed for several hours, until early evening on Aug. 26.

The director of Valleywise Health’s Arizona Burn Center said that the four victims suffered second-degree burns over 16 to 30 percent of their bodies. Two have undergone surgery and initially were in the intensive-care unit. Dr. Kevin Foster, director of the burn center, said that all are expected to survive and make a fully recovery, although it will be “a prolonged process.”

“Something exploded. There was a big flash,” Foster said. “I’m not an expert on explosions but I’ve seen some photographs of the building. It’s not a building anymore. It’s just a hole in the ground. And the fact that anybody walked away from that is amazing to me.

“The injuries certainly are consistent with a flash, with something that exploded and burned very quickly and was very, very hot for a short period of time, some type of volatile flash, not like a flame.”

Chandler firefighters got the call at about 9:30 a.m. Aug. 26 and upon arrival found the print shop’s roof gone and fire in the structure, according to Welch.

Welch said there were no other injuries and no extension of fire to other suites in the strip center, however, structural instability was found in walls of three suites west of the print shop, which is in the extreme eastern end of the center.

While the walls still stand, they belie the seriousness of the damage. Aerial views reveal nothing but a debris-filled crater where the print shop was.

“The inside of the building is completely destroyed, and if you get closer to the building, the walls have been pushed out,” Welch said.

“So it was a significant explosion.”