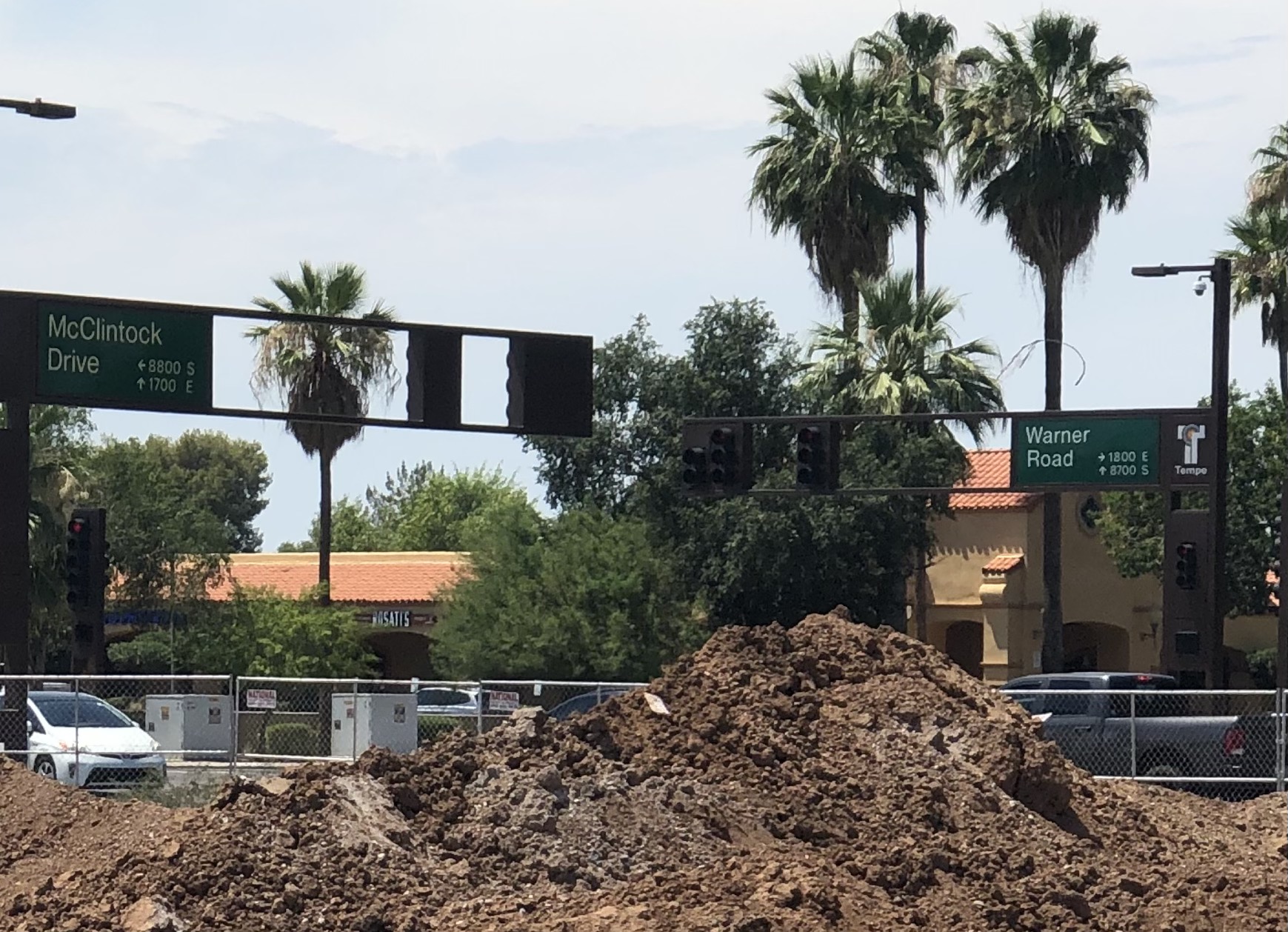 Work began this week on a Take 5 Oil Change facility on a vacant lot at McClintock Drive and Warner Road, contrary to overwhelming wishes of neighbors. –Photos by Lee Shappell for Wrangler NewsThere will be liquid flowing at the southeastern corner of McClintock Drive and Warner Road at Alta Mira Plaza, but it won’t be on the patio of a wine bar/bistro, as many neighbors once hoped.

Instead of selecting a varietal of wine, their choice will be the desired weight of motor oil. That might not pair nicely with their angst.

After years of full-bodied opposition, on June 28 work began on an oil-change facility, after all, when a crew with earth movers began excavation on the South Tempe vacant lot at 8805 S. McClintock Drive.

Kris Baxter, a public information officer for the city, confirmed on June 29 that Diversified Partners and owner Walt Brown received their building permits in May for a Take 5 Oil Change business.

Attempts to reach Brown of Diversified Partners for comment have been unsuccessful.

After the council’s slap-down, Brown filed a notice of claim against the city for $2.1 million plus legal fees, followed by a lawsuit in Maricopa County Superior Court. A negotiated settlement in May 2020 granted Brown and Diversified a use permit and development plan review that allows an oil-change shop to be built on the property.

Brown claimed that his proposal met every city requirement, yet the City Council rejected it unanimously, due largely to the scope and passion of neighbors’ opposition.

The settlement, however, did not include a building permit. That took some time.

The site is zoned for an oil-lube shop.

Property enhancements that had been recommended by city staff that Brown and Diversified originally declined to incorporate, such as setback service bays and improved paving near walkways, were agreed upon in the settlement.

The city will not pay out any money as a result of the settlement.

“It’s important to note that Arizona has some of the strongest property-rights laws in the country,” Baxter wrote in an email to Wrangler News. “Rather than fighting a lawsuit that the city would be unlikely to win, we are working to be good stewards of tax dollars for all our residents and have the best possible business of its type in that location.

“During the process, we heard questions from residents about the validity and use of the Character Area Plan.”

The city and residents produced a Character Area Study for the area several years ago and that plan was consulted for this project.

“While these documents are consulted by staff and elected officials, they are guidelines and can never be used in place of Tempe’s Zoning and Development Code, City Charter, Arizona State law or federal law,” Baxter wrote.

She added that no additional public hearings on the development are scheduled.

How this settlement plays with neighbors remains to be seen. Matt Smith, who headed opposition to the project two years ago, said in an email to Wrangler News that he is not yet prepared to comment.

The lot once was home to a gas station before it was demolished.

Neighbors were up in arms when it became known that Brown then planned a Valvoline oil-change operation on the site. They spoke out passionately in large numbers against it. Of 772 respondents to the Development Review Commission, representing 11 south Tempe neighborhoods in the 85283 and 85284 ZIP codes, 96.9 percent opposed the plan.

Diversified Partners proposed a single-story building with three drive-through service bays. The initial proposal called for a brick-architecture building, with heavily landscaped perimeter that includes trees that somewhat block the view of the building from the intersection, upgraded paving for pedestrian connections and a bus shelter.

Neighbors wanted a restaurant with patio dining on the site, similar to those at the Rural/Warner intersection a mile away that revitalized a former convenience-store space.

Even Smith, the neighborhood activist, acknowledged that Diversified’s appeal “is reasonable,” but he and other opponents said their concern is less about the immediate impact of any business on the corner than it is about the area’s future. The General Plan, after all, is the vision through 2040. Smith pointed out how passionately the neighbors had spoken out in person and via social media.

Brown acknowledged the neighbors views on the evening when the City Council torpedoed his appeal.

“There is a lot of passion in this room,” Brown said. “I’ve invested in this corner because I like south Tempe. We’re very passionate about the site. We want to do the right thing.

“It’s amazing to me that the (Tempe) planner isn’t here tonight for some reason, so there is some stuff that I think we need to talk about regarding the facts. I can tell you we worked our butts off and tried to do the right thing. We’re here hat in hand to try convey that.”

In denying the appeal, Council members had said they were moved by the overwhelming opposition of the neighborhood before they agreed to settle the subsequent lawsuit.

Lee Shappell
Lee Shappell became a journalist because he didn’t become a rocket scientist! He exhausted the math courses available by his junior year in high school and earned early admission to Rice University, intending to take advantage of its relationship with the Johnson Space Center and become an aerospace engineer. But as a high school senior, needing a class to be eligible for sports with no more math available, he took student newspaper as a credit and was hooked. He studied journalism at the UofA and has been senior reporter, copy desk chief and managing editor at several Valley publications.
Previous articleLavish ‘Cruella’ deserves popularity despite drawn out, weighty narrative
Next articleNonprofit FABRIC Tempe strives to make AZ a fashion-industry capital