Changes coming to Diablo Stadium, but will one of them be the Diablos? 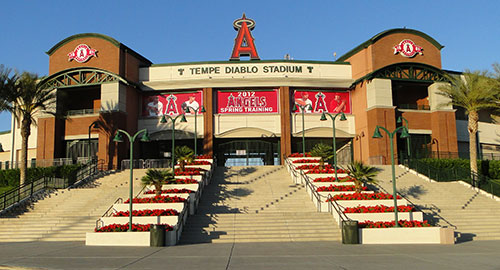 Changes totaling nearly $51 million are coming to Tempe Diablo Stadium that will keep the Los Angeles Angels at the remodeled half-century-old ballpark for Cactus League spring training through at least 2035.

One change the Tempe Diablos hope is not made, however, is their relationship with the city and the team on game days at the ballpark, where the Diablos are the primary charitable recipient of funds for their philanthropic activities.

“We don’t anticipate that there will be tremendous change, but we don’t know if that will be changing,” New Diablos President Michael Passante said.

No confirmation has been given to the Diablos, a Tempe all-volunteer organization, according to Passante.

“The club certainly wants to be there and volunteer and be part of the game-day experience for everybody,” he said. “We haven’t been given anything to suggest that we won’t continue to be a part of the all the hard work that goes into volunteering for the Cactus League, but it is early to comment on what the ramifications will be. We’re still trying to sort out the details.”

The Diablos, which funds worthwhile endeavors across the city, derives a significant chunk of its annual revenue from their contract with the city to provide parking operations, ushers and ticket takers at the stadium on Cactus League game days and from the Angels through giving.

“To hear that the city is continuing its relationship with the Angels certainly is exciting, and I know all of us are feeling that,” Passante said. “It’s a huge win for Tempe to be able to have the team stay in heart of the city. Obviously we want to be there to support the Angels and help make a great game-day experience for the fans. Diablo Stadium is a great setting for baseball, one of the best in spring training.”

But after a half century, it does need some freshening up.

Diablo Stadium, 2200 W. Alameda Drive, at the southwestern bend of Interstate 10’s Broadway Curve, was built in 1968 and is owned by the city. As the oldest spring-training facility in the Cactus League, the Angels and Tempe agreed that stadium is falling short of meeting Major League Baseball standards and in matching experiences offered at newer Cactus League facilities. The Angels have played at Diablo since 1992.

A City Council-approved memorandum of understanding with the Angels in May calls for the biggest renovation in the stadium’s 53-year history to improve fan and team experiences. The first phase could be ready by next spring:

The Angels and the city want to extend the team’s lease through 2035. The team would have options to extend even farther, to 2040 or 2045. The Angels will keep their year-round minor-league operations at the Diablo complex, where Tempe also hosts recreational baseball, tournaments and more than 20 events a year.

“Diablo Stadium definitely is one of the older stadiums in the Cactus League family and like anything else – office space or your own personal home – you have to continue to make upgrades to keep up with the Joneses,” Tempe Mayor Corey Woods said. “This deal is a long-term commitment between the city and the Angels that allows them get upgrades they need to make to make it a world-class facility, for the players and for the people who want to come and enjoy a game. So we are really excited.

“Tempe Diablo Stadium and spring training are huge to the city of Tempe. People who come to these games also spend time in downtown Tempe and around the city. It is a major revenue generator. It really is a huge win for the city to be able to keep them here until 2035. It’s something that obviously our residents love. It’s a draw for tourism. We really value our partnership with (Angels owner) Arte Moreno and the Angels organization. That’s why we saw it as imperative to find a way to ensure that we kept the Angels here all the way through 2035 and possibly longer.”

The memorandum of understanding also highlights the Angels’ ongoing philanthropic commitment to Tempe, including creation of a fixed annual contribution of $150,000 a year from the Angels to a local charity, providing as much as $2 million through 2035. The Tempe Diablos are the current charitable beneficiary.

The Diablos reinvest approximately $1 million a year into the Tempe community in high school scholarships, an extensive grant program to non-profits and a variety of services that help make Tempe families’ and residents’ lives better.

“Baseball is the heart and soul of the Diablos,” said Bill Ottinger, a member of the organization’s Board of Directors. “This group formed back in 1968 as more of a program of the Tempe Chamber of Commerce to bring spring training baseball to Tempe. We did that. We attracted the Seattle Pilots at the time. Today, we have a wonderful relationship with the California Angels and Arte Moreno, their owner, who has strong ties to Tempe.

“It’s a wonderful partnership. The ballpark is named after the Diablos. It’s a rich history.”

One day each spring, the Angels historically have had Diablos Day at a Cactus League home game at the stadium, in which Diablos Charities receives all proceeds from tickets, parking and concessions.

The Diablos currently have 34 active members and have had 217 since their inception in 1968.

“Just the passion these people have to roll up their sleeves and volunteer defines the organization,” Passante said. “We hope the grassroots efforts that we fund makes you want to go out there and help.

“The Diablos are excited for the city of Tempe. We’ve seen all these other teams getting new stadium deals and the concern was that Tempe Diablo was kind of land-locked, and what could they do? For the city, this is a huge win to get the Angels through 2035. The Angels have been first class. It’s hard not to root for the team when they’re doing so much good in the community.”

Lee Shappell
Lee Shappell became a journalist because he didn’t become a rocket scientist! He exhausted the math courses available by his junior year in high school and earned early admission to Rice University, intending to take advantage of its relationship with the Johnson Space Center and become an aerospace engineer. But as a high school senior, needing a class to be eligible for sports with no more math available, he took student newspaper as a credit and was hooked. He studied journalism at the UofA and has been senior reporter, copy desk chief and managing editor at several Valley publications.
Previous article
ASU ‘Fiji’ frat members take time to lend helping hand to Salvation Army
Next article
Chandler sending 5 bond issues to voters in November totaling $272M