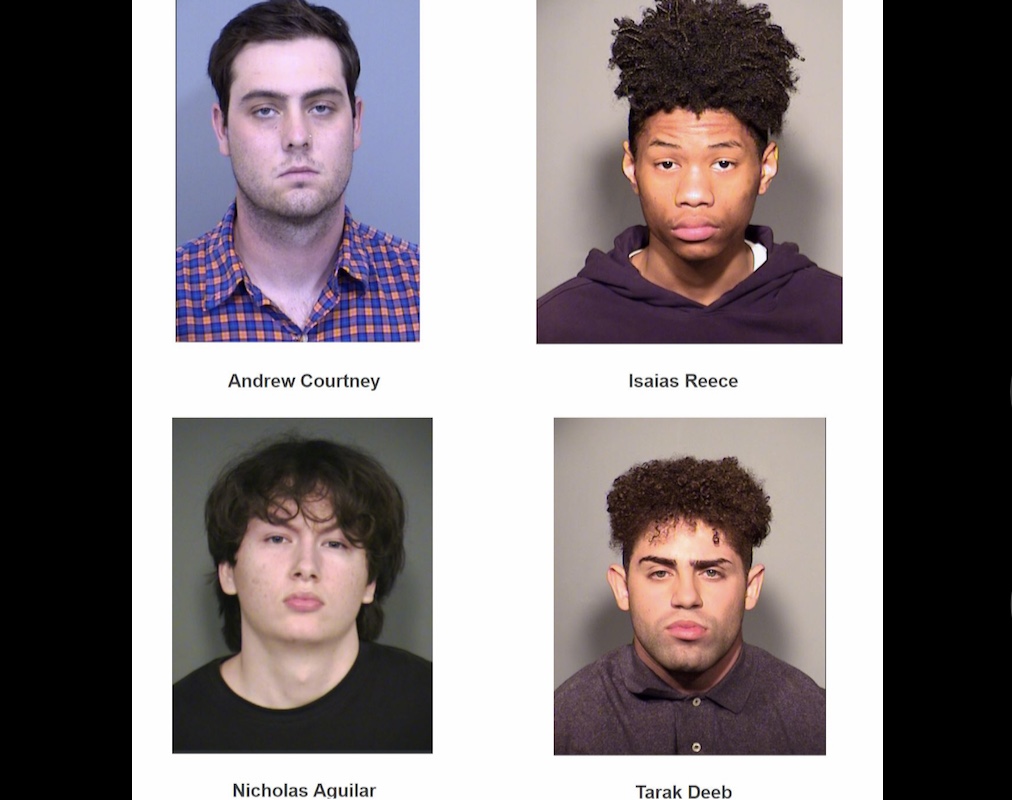 Chandler Police arrest four suspects related to March brawl with stabbings at Chandler Fashion Center; review boards continue investigation into crash of small plane near Stellar Airpark and the mall; two Chandler icons inducted into honorary plaza; and the arts center adds a couple more shows to its 2021-22 lineup — it’s all right here in this installment of Chandler Briefs.

Chandler police have made four arrests in connection with a March brawl that involved three stabbings at Chandler Fashion Center.

Andrew Courtney, 23, of Sierra Vista, was arrested on suspicion of three counts of aggravated assault with a dangerous instrument, each count a Class 3 felony, according to Chandler Police.

After detectives developed information that linked Courtney to the stabbings they arrested Courtney in Sierra Vista in cooperation with the Sierra Vista Police Department, Chandler PD said. Police documents state that Courtney was “clearly on the offensive” during the attack and that witnesses heard him saying that he had a knife and would “cut the others.”

Records show that Courtney has a previous conviction on drug-related charges and that he was free on bond at the time of the mall fight on a felony child-molestation charge.

Police said three other men —Tarik Deeb, 19, of Queen Creek; Isaias Reece, 18, of Phoenix; and Nicholas Aguilar, 18, of Mesa — also were booked into jail on charges of disorderly conduct. Police said they all ran out of the mall after the altercation and drove off in a gray, four-door sedan.

A fight broke out at about 5:30 p.m. on March 12 inside the mall involving nine young men in two groups. Three were stabbed by a man armed with a knife, now identified by police as Courtney. The incident was recorded on a mall security video.

Sgt. Jason McClimans of Chandler PD said that the two groups exchanged words on the lower northwest level inside the mall, which escalated into a fist fight when one of the young men took out a knife and stabbed three others.

“This was not a knife fight like you would see on television or in a movie,” McClimans said. “There was just one person who was armed with a knife.”

The three who were stabbed ran through the mall seeking help. They were treated at a hospital for non-life-threatening injuries.

A small airplane that crashed near Chandler Fashion Center on May 9 injuring the 23-year-old pilot evidently was caused by the aircraft clipping an electrical line at the south end of Stellar Airpark in West Chandler, according to the Federal Aviation Administration.

The agency said it appears that the single-engine Cessna 172R clipped power lines just beyond the runway at Stellar, a privately owned, public-use airport, although both the FAA and National Transportation Safety Board are continuing their investigations.

The plane crashed onto the McClintock Drive overpass at Loop 202 shortly after 8 p.m.

The female pilot, whose name and condition have not been released, was the only person aboard. Sgt. Jason McClimans of the Chandler Police Department said her injuries were not life threatening.

According to SRP, electricity delivery was rerouted while lines were repaired and there was no outage.

‘Tex’ Earnhardt and Glenn McCollum to be inducted into Celebration Plaza

Chandler will induct Hal “Tex” Earnhardt, Jr. and Glenn McCollum into Celebration Plaza at Tumbleweed Park at 9 a.m. Saturday, May 15, in honor of their contributions to the community.

Members of Chandler City Council will join friends and family of the inductees during the ceremony.

Celebration Plaza is a permanent water feature and monument wall near the center of Tumbleweed Park where City Council recognizes organizations or individuals for their civic leadership, public outreach and outstanding personal service and commitment to the community.

From humble beginnings to heading an automobile dealership empire, the late Earnhardt left an imprint on Chandler’s history. In 1951, at 21, he became the youngest to own a Ford dealership. From one sale a month, he grew Earnhardt Auto Centers into 23 dealerships across Arizona and Nevada. “Tex” was known for his philanthropy and his popular catchphrase: “That ain’t no bull!”

McCollum, an architect, designed nearly 500 structures during his 37-year career after opening his firm in 1954. He designed schools, churches, commercial buildings, government buildings (including one of Chandler’s City Hall buildings) and residences. Most of his designs are classified as mid-century modern style.  He served a term on Chandler City Council and spent 27 years on Chandler’s Planning and Zoning Commission.

Chandler Center for the Arts announced the addition of concerts and shows to its upcoming season. The new round of performances is now on sale. Added to the schedule: recent Grammy winner Ledisi, country-superstar Clint Black and saxophonist Boney James.

The public can visit Chandler Center for the Arts for additional information or call the box office at 480-782-2680.

Chandler Center for the Arts anticipates adding still more shows to its schedule as performers begin to resume their national tours and appearances.