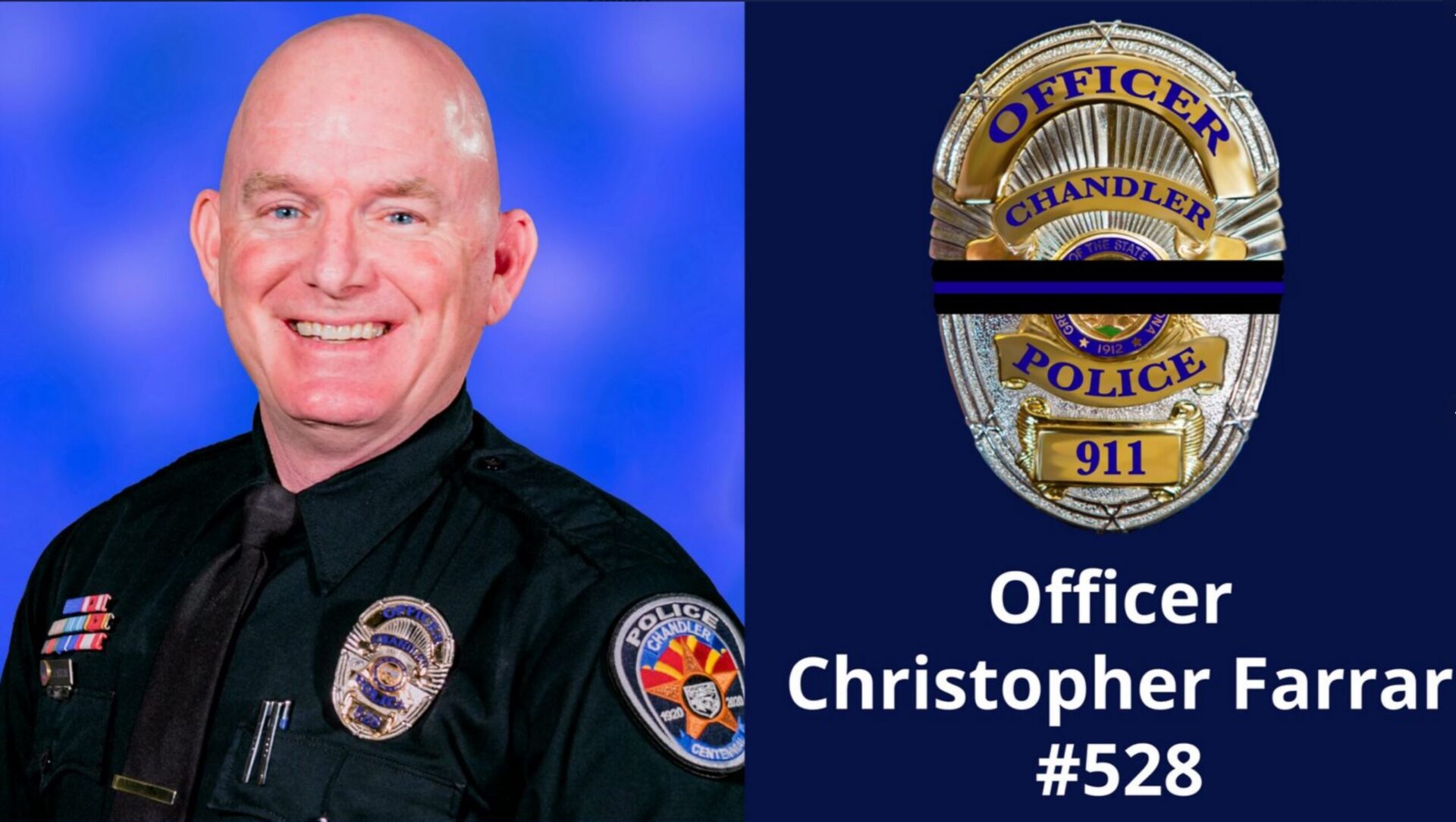 An 18-year veteran of the Chandler Police Department was killed and a Gilbert police officer was injured critically late Thursday, April 29, during a massive, multi police-agency pursuit involving gunfire that began near Eloy and ended in a shootout at a car dealership in Gilbert.

Chandler Officer Christopher Farrar, 50, a member of the K-9 unit, and third-year Gilbert Police Officer Rico Aranda were injured when struck by a stolen vehicle driven by Jonathon Altland, 25, near San Tan Ford, according to Gilbert police, who are heading the investigation.

The two officers were taken to Chandler Regional Medical Center where Farrar died. In a late Friday afternoon update, Gilbert police said that Aranda still was listed in critical condition with severe head injuries, but was stable and showing signs of improvement.

Three DPS troopers and a dealership employee also suffered non-life-threatening injuries and were taken to the hospital.

At about 5:30 a.m. Friday, as officers in lines of police vehicles waited outside the hospital, the flag-draped body of Farrar was taken in a police-escorted procession to the Maricopa County Medical Examiner’s Office in downtown Phoenix. Later in the afternoon, the body was moved to a Phoenix funeral home.

Chandler Police Chief Sean Duggan, his voice heavy with emotion during an early-morning news conference, called it “a very difficult time for our organization, our department and really for the entire Chandler community.”

“Last night, we lost one of our officers, Chris Farrar. Chris was struck and killed by a violent felon in a stolen vehicle in a multiagency shooting and pursuit,” Duggan said. “Chris was 50 years old and he was a member of our department for 18 years. I knew Chris, and I can tell you that every day he came to work, he made a difference.

“Throughout the course of his 18 years he touched many lives. So I just ask that you keep Chris’ family in your thought and prayers. Just take a moment and be mindful of the brave men and women who are out there daily helping keep our community safe.”

Chandler Mayor Kevin Hartke also asked the community to keep the fallen officer and his family in its prayers.

“Our hearts are heavy as we mourn his untimely death after nearly two decades of dedicated service in Chandler,” Hartke said in a statement. “I extend my deepest condolences to the Farrar family and to our Chandler police family.”

Gov. Doug Ducey ordered flags at all state buildings to be lowered to half-staff until sunset April 30 to honor Farrar.

“Law enforcement personnel like Officer Christopher Farrar put their lives on the line to protect others and keep our communities safe,” Ducey said in a statement. “We are incredibly heartbroken that a criminal’s senseless actions took his life and injured other innocent people. An 18-year veteran of the Chandler Police Department, Officer Farrar was a hero through and through, and his commitment to protecting Arizonans was unwavering. My sincerest condolences go to Officer Farrar’s loved ones, the Chandler Police Department, and the entire law-enforcement community during this difficult time. Arizona will continue to pray for those who suffered injuries due to this tragic crime.”

The Gilbert Police Leadership Association has created a GoFundMe account in Officer Aranda’s name. To make donations for his family, go to: gofund.me/afda31c1.  Please note that this is the only official donation source.

Farrar had served on the bicycle team and patrol division at CPD before joining the K-9 unit. He received numerous commendations and accolades, including the department Medal of Honor in 2004, Community Service Award in 2009 and Spotlight Award in 2019. There are at least four people alive who otherwise wouldn’t be had it not been for Farrar, reflected in his four Lifesaving Awards.

Farrar is survived by his mother, father, brother, sister, daughter, two sons and a grandchild, according to CPD.

The public is invited to a candlelight vigil at 7 p.m. Saturday, May 1, at Compass Christian Church, 1825 S. Alma School Road in Chandler, where Farrar was a member.

According to Gilbert police, the incident began shortly after 10 p.m. Thursday when a Pinal County Sheriff’s deputy attempted to make a traffic stop of a truck driven by Altland on State Route 87 north of Eloy. Altland sped away from the deputy, firing gunshots at the deputy as he pursued.

The chase continued into Chandler, where Altland drove through a gate onto the Chandler Municipal Airport runway, which temporarily shut down air traffic, and then drove away onto Loop 202/San Tan Freeway, going the wrong way.

Altland jumped out of the truck and ran into the San Tan Ford dealership lot. Pinal County, DPS, Chandler and Gilbert officers surrounded the building. Altland then stole a vehicle at the dealership, according to Gilbert police, and attempted to drive away, running into Officers Farrar and Aranda, as well as a San Tan Ford employee.

Gilbert police said the multi-agency incident remains under investigation. More information will be shared as it becomes available.