Weird in many far-more important ways, 2020 also was a weird movie year.

It was, for most of us, vastly truncated moviegoing. I did not see a movie at a theater, either a press screening or a regular commercial showing, since my wife and I went to that new version of Emma in late March.

This is almost certainly the longest such stretch for me since I was a small child. I also haven’t been to a movie at any kind of public venue at all since I went to see Sonic the Hedgehog at the West Wind Drive-In in Glendale a few days later.

All the same, I’ve managed to see quite a few movies. Via streaming, DVDs and the like, movies have been a major diversion during the months of lockdown, as well as the months since the relaxation of lockdown, during which many of us still haven’t heard of a movie worth risking COVID-19 infection to go see.

The release of lots of big-budget, screen-filling movies was postponed, like the James Bond flick No Time to Die. So, 2020 turned out to be a year for the sort of movies that critics often claim to wish would get more attention: low-budget indies, obscure festival bait and—especially—documentaries. They got notice they might otherwise have struggled to find.

In 2020, we got Korean small-town horror with Zombie for Sale, micro-budget Great Lakes absurdism with Lake Michigan Monster, sexual awakening at church camp with Yes, God, Yes, and a comic Scottish Most Dangerous Game with Get Duked!

We got documentaries about everything from Harry Chapin to the Moonies to President 45’s psychology. And all of them got a marketing push that would have been all but unthinkable the year before.

Anyway, here are the 10 films that seemed to help me pass 2020 most agreeably: 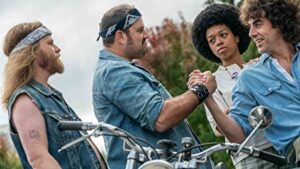 The Trial of the Chicago 7—Aaron Sorkin’s dramatization of the 1968-70 trial was as lively, funny, sad, cogent, thought-provoking and entertaining as anything I saw this year.

Never Rarely Sometimes Always—More tough but touching naturalism, this following a teenage girl in trouble as she and her best friend travel from small-town Pennsylvania to New York City. Sidney Flanigan gives one of the performances of the year in the lead.

The King of Staten Island—Pete Davidson co-wrote and stars in a semi-autobiographical comedy about a directionless young guy in the title borough, directed by Judd Apatow. Marisa Tomei plays his widowed mom. The movie’s a little poky and shapeless, but it’s hilarious and good-hearted.

Desert One—The disastrous attempted rescue mission of the American hostages in Iran in 1980 is chronicled in this painfully honest documentary from Barbara Kopple, fleshed out with graceful animation by Zartosht Soltani. 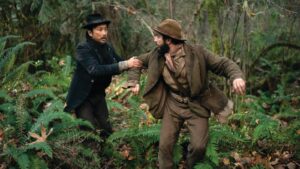 First Cow—The story of two guys trying to get ahead in the Oregon Territory in the early 19th Century, directed and co-written by Kelly Reichardt, is an austere and heartbreaking take on the American Dream.

Kajillionaire—Maybe the strangest big-name release of the year, this deeply eccentric portrait of a family of the smallest of small-time grifters is made unforgettable by performances from Evan Rachel Wood, Richard Jenkins, Debra Winger and Gina Rodriguez.

My Darling Vivian—This documentary about Vivian Liberto, the first wife of Johnny Cash, is told by their four daughters. It’s essential viewing for Cash buffs, but fascinating for anybody. 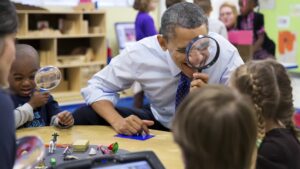 The Way I See It—Another documentary, this one about Reagan and Obama White House photographer Pete Souza’s awakening to political engagement. There are maybe too many corny inspirational anthems, but the subject’s photos are potent.

Borat: Subsequent Moviefilm—The Candid Camera-on-crack style of comedy practiced by Sasha Baron Cohen is, I must admit, not my cup of tea. I find it excruciatingly embarrassing to watch at times. But there’s also no doubt that Cohen, through the adventures of his “Kazahk” alter-ego Borat, makes highly trenchant and relevant satirical points, and Maria Bakalova, the young Bulgarian actress who plays Borat’s daughter, brings the movie an unexpected dose of genuine emotion.

Happy New Year everybody! Have a great 2021, at the movies and everywhere!