A towering inflatable dreidel, sparkly Stars of David and menorahs in green laser lights, plus foot-high, blue letters proclaiming “Happy Hanukkah” sprouting from the front yard of a home in West Chandler make it clear: The time for the annual Jewish eight-day celebration is at hand.

Hanukkah, which this year begins at sundown Dec. 10 and runs through Dec. 18, marks the rededication of the Second Temple in Jerusalem around 200 B.C. The first candle on the menorah is lighted on the first evening of Hanukkah.

Jed and Danielle Wiltchik, parents of two young sons, moved into the neighborhood last spring and quickly became known for their elaborate holiday yard decorations. Their street had never had a Hanukkah light display. That is, until now. 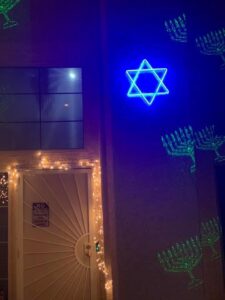 “Hanukkah—it’s tradition,” Jed explained. “We both were raised in families that are deeply rooted in Jewish tradition and it’s why we met on JDate.”

The Jewish dating website has paired thousands of Jewish couples over the last two decades, including Jed’s brother and sister-in-law.

Inside their home, blue tinsel wraps around the bannister and Stars of David are still further reminders of the family’s faith.  Then there are the culinary delights of the season: latkes (potato pancakes) and sufganiyot (jelly doughnuts) among them.

“The word ‘Hanukkah’ means dedication, so you dedicate yourself back to believing in one thing, which is our God,” Danielle said. “We do that through the festivities of playing dreidel, eating latkes, sufganiyot, lighting candles, singing songs and saying our prayers.”

Garrison, 11, and Griffin, 9, receive gifts, too, as part of the holiday fun.

Though it comes during the same month as Christmas this year (some years it falls in November) the Jewish celebration of Hanukkah, the family noted, is not a substitute for the Christian holiday. 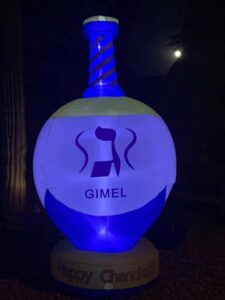 “It is not something that we’re in a competition, but everyone has their own beliefs and their own religion,” Danielle said. “We teach our children to respect all religions and we teach them by explaining to them and answering any questions they have about it.”

As for the light-filled Hanukkah display in the Wiltchik’s front yard, it’s definitely been noticed.

“A lot of people have been stopping by,” Jed said. “They tell us, ‘We love your display!’”

Other Jewish holy days, such as Yom Kippur, are solemn affairs. Not so with Hanukkah.

“We always go over the top,” Danielle said, chuckling. “For us, it’s a minor holiday and a joyous holiday—so many times you don’t get a chance to just celebrate, have fun and enjoy.”

Joyce Coronel
Joyce Coronel has been interviewing and writing stories since she was 12, and she’s got the scrapbooks to prove it. The mother of five grown sons and native of Arizona is passionate about local news and has been involved in media since 2002, coming aboard at Wrangler News in 2015. Joyce believes strongly that newspapers are a lifeline to an informed public and a means by which neighbors can build a sense of community—vitally important in today’s complex world.
Previous article
Nominations deadline approaching for 23rd Annual MLK Diversity Awards
Next article
Tempe officer violated policies in hotel incident, stripped of patrol duty