CORRECTION: A story on Page 14 of the Nov. 7-20 Wrangler News print edition gave an incorrect history of Corona del Sol’s recent playoff appearances. The Aztecs made the playoffs in 2012, 2015 and 2019. The Wrangler News regrets the error.

It seems that Corona del Sol High’s football team is a playoff contender once in a blue moon.

But after the Aztecs demolished cross-freeway rival Mountain Pointe on the eve of a blue moon Oct. 30 and followed it Nov. 5 with a 51-0 rout of Dobson, the “P” word is a real possibility for them.

Corona, while not a playoff regular, has made post-season appearances three times in nine seasons, in 2019, 2015 and 2012. It is No. 10 in the state in MaxPreps’ 6A rankings (The first official Arizona Interscholastic Association rankings, which are used to determine playoff participants, will be released Nov. 10). 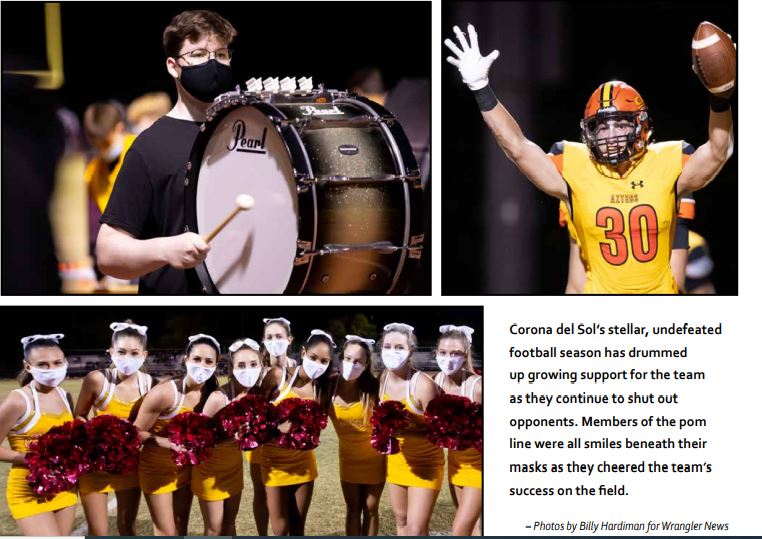 The Dobson win that elevated Corona to 6-0 was the Aztecs’ third shutout of the season.

Corona’s freshman and junior varsity teams also are undefeated, boding well for the future of the program.

Corona will be heavily favored on Nov. 13 vs. Westwood (0-5). If the Aztecs get through that as expected, it would set up a huge season finale Nov. 20 at Mountain View (5-0) with playoff seeding at stake.

The Toros play Mountain Pointe and Basha before the Aztecs visit. Like Corona, Mountain View is expected to enter the finale 7-0.

The Aztecs are on their longest streak in five years. Their only close game was a 28-24 come-from-behind thriller over Basha on Oct. 9 when Bryce Douglass caught a 20-yard touchdown pass with less than a minute left from quarterback Quade Swearingen.

Corona’s success, however, is tempered by the reality that its schedule is not the most difficult. Its first seven opponents are a combined 8-28. The only foe with a winning record is Basha (3-2). Twenty-five of the 38 schools in 6A play a more-difficult schedule than the Aztecs, according to MaxPreps. Among the 12 that do not, though, is Mountain View.

Corona does not play No. 1 Chandler or No. 2 Hamilton in this pandemic-shortened season.

When the Aztecs dispatched winless Mountain Pointe, 45-9, it marked the second time in 12 months they’d topped a team that once routinely beat them. Coupled with a season-opening shut out win over Desert Vista, Corona rolled the Ahwatukee schools by a combined 73-9 this season. The Ahwatukee schools, however, are a combined 0-10 for the first time ever.

Corona’s defense is yielding 6.7 points a game, among the stingiest in the state. The past three games, its offense scored 51, 52 and 45 points. Corona’s balanced offense averages 198 yards rushing and 166 yards passing.

As the Aztecs position themselves for a playoff run, Swearingen must continue his 74.7 percent passing accuracy. His favorite targets are Jake Schmitt, a senior, with 19 catches for 334 yards (17.6-yard average), and Douglas, a fellow senior, with 15 catches for 210 yards (14.0).

Anyale Velazquez, a junior, is the team rushing leader (783 yards, 8.2 a carry). He gets support from senior Scott Musgrave (154 rushing yards, 7.0 average).

The stingy defense starts with senior Tudor Georgescu (team-leading 35 tackles, including five for lost yards). He also leads the Aztecs with five sacks.

Junior Jeff Lambert and Schmitt (29 tackles each) also are usually around the ball.

Senior Colton Mealer and Angel Dorame is second to Georgescu in quarterback sacks with 2.5 each.

Jack Farley, a senior, is the interceptions leader with two.

Aztec’s kicker, sophomore Colton Kieffer, is 32 for 32 in point-after kicks.

It’s time to separate realistic expectations from hype: A 6A playoff berth is likely for the Aztecs.

The 4A Padres’ defense has 16 quarterback sacks and five pass interceptions and its offense averages nearly 400 yards a game.

Jacob Irick leads the Padres with 45 tackles. Isaiah Williams is the sacks leader with 7.

The bubble burst for 3A Valley Christian. After a 4-0 start, all of them routs, the Trojans dropped a hard-fought 7-0 game on Oct. 30 to Arizona College Prep that left both teams 4-1.

VC finishes at Payson (2-3) on Nov. 6 and at home vs. Fountain Hills (2-2) on Nov. 13, giving the Trojans reasonable hope of advancing to postseason play.

Quarterback Jadon Hanzal has passed for 924 yards, Kaden Majercak has rushed for 530 (8 yards a carry) and Andrew Hanzal is the receiving leader with 340 yards.

It’s been a tough year for 4A Seton Catholic, which dropped all four of its games by lopsided scores before Game 5 at Youngker (0-3) on Oct. 30 was canceled due to the COVID-19 pandemic. That might have been the Sentinels’ best chance to pick up a victory this season.

Lee Shappell
Lee Shappell became a journalist because he didn’t become a rocket scientist! He exhausted the math courses available by his junior year in high school and earned early admission to Rice University, intending to take advantage of its relationship with the Johnson Space Center and become an aerospace engineer. But as a high school senior, needing a class to be eligible for sports with no more math available, he took student newspaper as a credit and was hooked. He studied journalism at the UofA and has been senior reporter, copy desk chief and managing editor at several Valley publications.
Previous articleSean Connery 1930-2020
Next articlePrint Edition – November 7, 2020