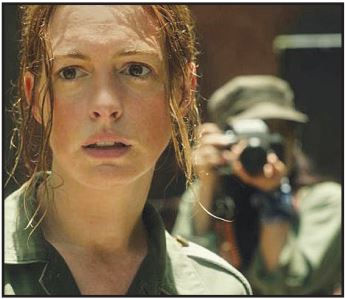 The yields of these scams are, at best, the likes of neckties or gift certificates for a free massage.

The Dynes live in a basement office beneath a factory that produces bubbles. They have to clean up the foamy froth that comes seeping down the walls on a daily basis. This gets them a ridiculously low rent, on which, of course, they are nonetheless badly in arrears.

Eventually the trio meets Melanie (Gina Rodriguez), an unflappable, free-spirited young woman, who more or less invites herself into the operation and throws everything into turmoil.

This is the set-up for this deeply eccentric comedy-drama by writer-director Miranda July. The story meanders, but the acting and left-field dialogue keep it coherent.

Jenkins and Winger are so brilliantly, oppressively repulsive that the movie might be unwatchable without the fresh air that Rodriguez riotously provides.

The heart of the film, however, is Wood’s Old Dolio—hat wretched name is explained in due course—who has grown up isolated in the world of her pitiful chiseling parents. As a result she’s a doleful, affectless blank slate in a track suit, with Rapunzel-length hair like her Mom (presumably to avoid the expense of haircuts). She’s never experienced a minute of true love and affection in her life.

The stillness and deliberation of Evan Rachel Wood’s performance gives Old Dolio the radiant sadness of a silent movie comic heroine; she’s hilarious and heartbreaking at the same time.

The title refers to Robert’s life aspiration: He’s content to skim and survive, while everybody else, he contemptuously notes, “wants to be a kajillionaire.”

In its homestretch, the movie seems to go completely crazy, yet July is able to turn Robert’s grotesque meaning joyously on its head, and the final seconds of the film are beautiful and weirdly inspiring.

Shortcut—Here’s how bad an idea taking a shortcut turns out to be in this scare picture: First, the charming Fiat bus piloted by a resolute driver (Terence Anderson) and carrying a quintet of bored British schoolkids gets hijacked at gunpoint by an escaped maniac (David Keyes), whose specialty, reportedly, is eating the tongues of his victims.

But soon after, this guy’s menace is far overshadowed when the bus is besieged by a fanged, squalling creature-like something from Stephen King’s remainder table.

Eventually, the kids end up in an abandoned underground network of tunnels, a military base of some sort. They seem pretty relaxed about the whole thing; rather than try with all their might to find their way out and back to civilization as quickly as possible, they split up and dawdle around, making time for squabbles and hints of teen romance.

Eventually we get some fairly perfunctory backstory on the monster, and the kids team in the manner of It for a showdown.

Big chunks of this movie, an Italian production in English directed by Alessio Ligouri, don’t make much sense, not even horror-movie sense.

But it’s atmospheric, there are some scares, the actors are capable and attractive, and at just 80 minutes it doesn’t tax our patience too much.