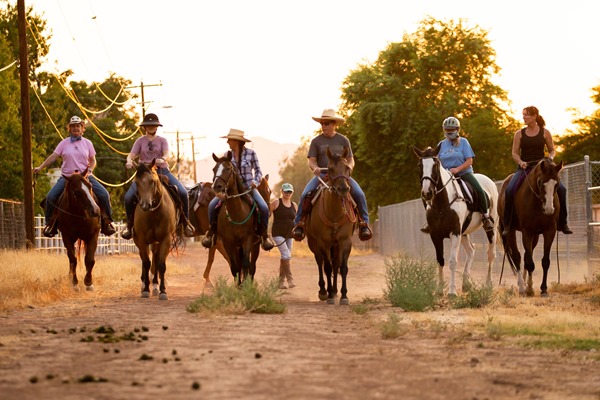 A palomino raises its head to study the two strangers striding down the bridle path that wends its way past dozens of horse properties. It’s a scorching hot afternoon and ponies stand quietly in the shade of an enormous ash tree while a deer and languid llamas cast their gaze on the horizon.

This isn’t a ranch town in Montana. It’s South Tempe, home to several neighborhoods that boast acre lots and a secluded rural lifestyle that forms an oasis in the midst of an otherwise busy corner of suburbia.

Patti Lines bought her home in Sunburst Farms two years ago. “I did everything I could to be in this neighborhood,” Lines said. That included pooling all her resources to pay cash for the home she says is “a piece of crap” she wouldn’t have been able to obtain a loan for. It wasn’t about the house—it was about the horse.

“This is irrigated property and so I have a green patch for my horse to graze in.  I have trails to ride on and I’m close to everything,” Lines said. “It’s a very peaceful feel here.”

Cheryl Rogers owns three horses and has lived in Sunburst Farms since 1982. She said she uses the equestrian trail that passes through the area twice a week. 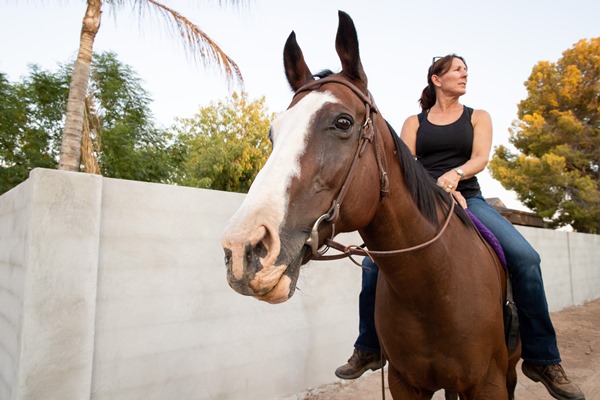 Recently something cropped up on the bridle path that caught her attention. It wasn’t a cluster of wild flowers. An almost seven-foot block wall built by a resident of Shady Lane Estates now impinges on the equestrian trail. Many Sunburst Farms residents fear the wall could set a precedent that endangers their rural way of life.

Rogers says she attended Tempe City Council meetings back in 1995 when the developer of Shady Lane Estates proposed his project.

Dust and traffic are the two concerns cited by a surveyor who dealt with the City of Tempe on behalf of his client, a resident of Shady Lane Estates who wanted to build the block wall. The wall is built just inside the resident’s property line but subtracts 10 feet of width from the bridle path that flanks the lot.

Rogers finds the complaints of dust and traffic ironic.

“The developer said, ‘That’s why they moved here, because they want the rural atmosphere. They want to be in this agricultural atmosphere.’ But then they put walls around it.” She says she’s heard residents of Sunburst Farms voice a notion she finds disquieting:

“I’ve heard a couple neighbors say, ‘Yeah, I’d love to block off the bridle path and have that piece of property,’” Rogers recounted.

Tempe City Councilmember Jennifer Adams lives in South Tempe and frequently rides her horse on the trail. After hearing from numerous residents of the area about the newly constructed wall that encroaches on a stretch of the path, she organized a Zoom meeting between the city’s attorney, city staff and worried neighbors. Councilmember Doreen Garlid and representatives of the Buena Vista Ranchos HOA and Calle de Caballos HOA were also in on the meeting as the bridle path continues into their neighborhoods.

“It’s really kind of a mess. A lot of these people lived there then and they didn’t want this Shady Lanes development in the first place. So they went to the council meetings,” Adams said.

“I would never have approved that. You’ve got big estates in the middle of horse property—that’s just not a good fit in my opinion.”

Adams said she took residents’ concerns to the Tempe City Council and asked for the issue to be placed on the executive-session agenda to “see what we can do to stop further situations like this.”

“Even though he’s not taking the entire bridle path, what he sets potentially is a dangerous precedent,” Schmehl said.

“If we let him take that portion of the easement with no action, then that sets a precedent that could let other homeowners take back their easement with no consequences. And if we start losing portions of our bridle path, that impacts all of our property values and the lifestyle that people like in this neighborhood.”

Schmehl provided Wrangler News with a string of emails between Jim Flack, the commercial surveyor hired by the homeowner who had the block wall built, and officials from the City of Tempe, that details the months-long time frame leading up to the building of the wall.

In a December 5, 2019, email to Flack from Kathy Pettigrew, real estate management coordinator for community development and building safety in Tempe, Pettigrew explains that “Shady Lane Estates was carved out of an area where equestrian paths and uses were already in place, causing the City to require the subdivision to be conditioned to continue to be subject to them. The City would have no authority to abandon any portion of that path as it is not a public easement nor right of way, and I have no evidence that the City has any property interest nor authority to regulate the path.”

Months later, in a March 2 email from Deputy Director of Planning for Tempe Ryan Levesque, Flack was told: “You are seeking to abandon an easement, but because the city required the easement at the time of the zoning action (condition of approval). The reversal of a condition of zoning would require going through the very same process that the condition was placed on the property (an ordinance through a public hearing). I don’t believe there is support for such a request, as staff would be the recommending body.”

In an Aug. 17 email from Larry Heywood of Heywood Management, the company that manages Shady Lanes Estates, to Christa Zamora, a Sunburst Farms resident, Heywood said the development’s architectural committee did not object to the building of the wall “as long as the owner of lot 7 adhered to any restrictions by the City of Tempe or any other approvals required…if there are easements on a lot, compliance with the requirements of any such easements are the responsibility of the lot owner.”

A plat map, available from the Maricopa County Assessor’s office, shows the property details of the Shady Lanes subdivision and contains clear references to the bridle path easement.

Wrangler News made several attempts to obtain comments from the Shady Lane Estates resident who had the block wall constructed but at press time had received no response.

Schmel wrote to the Tempe city council and mayor Aug. 14 outlining his concerns. In 1995 when the Shady Lane Estates developer sought a variance, an agreement was struck that “Shady Lane would contribute and maintain a portion of horse path on their border. At that time the south Tempe homeowners were encouraged by city staff to agree to the variances and accept this compromise. It was expressed to the staff at that time that it was important to maintain the rural setting that is unique to South Tempe and we were assured by the city that the requirement to include the additional horse path and the trees within would do that,” Schmel says in his email. “The intent of these requirements was to buffer the existing AG zoned homes from exactly what is now occurring with the addition of the wall in the middle of the horse path.”

In an email to Wrangler News, Nikki Ripley, communication and media relations manager for the City of Tempe, said city staff, including the code compliance manager, zoning administrator and city attorney researched the recorded documents for Shady Lane Estates and determined the bridle path easement is private.  “City staff also visited the site and confirmed the wall under construction does not exceed 7 feet in height.  As a result, the city does not have legal enforcement abilities for this private easement and the wall being constructed does not require a city permit,” Ripley wrote.

Schmel disagrees and says so in his email to the mayor and council.

“I believe the city does have authority in this matter. I suggest as one alternative you look to this as a zoning violation. Just as zoning would prohibit running a night club in a residential neighborhood, so should zoning prevent the homeowner from building a wall in an easement dedicated to the south Tempe equestrian community.”

“I feel so bad for the residents,” Adams said.