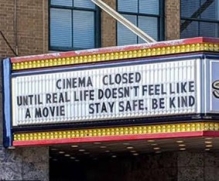 Last week somebody sent me an email with the subject line “COVID goes to the movies.” Inside were photos of movie theater marquees.

One of those, for a theater called The World, read “The World is Temporarily Closed”; another, “No close encounters of any kind.” And yet another: “Cinema closed until real life doesn’t feel like a movie.”

Perspectives from folks who, under normal circumstances, would be providing a way to momentarily escape the doldrums of our daily lives. Not so much these days, it appears.

It’s also quite true that movie-going, for those of us who prize it as one of our favorite forms of recreation, is among the most painful of COVID-era prohibitions. Some of us are trying to adapt to the current shortage of new movies, not to mention the inability to go out and see them at the multiplex even if they were being released—by, among other things, revisiting some of the enduring classic films of earlier decades Or, in some cases seeing them for the first time if we hadn’t yet gotten around to them. Best of all, they’re all available on Netflix or Amazon. And…it’s not a bad way to pass a pandemic. 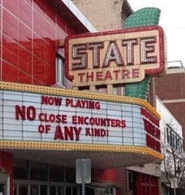 Here are a few of the obvious greats, rattled off with a friend from the top of our heads; dozens or hundreds of alternatives could be just as validly proposed:

Gentlemen Prefer Blondes—Marilyn Monroe, who’s certainly preferable even if she’s not blonde, if you ask me, and Jane Russell get into mischief on an ocean liner in this 1953 musical directed by Howard Hawks. My wife loves this movie for the performance of child actor George Winslow as the croaking “Mr. Spofford.”

Casablanca—Almost synonymous with “classic movie,” this tale of WWII intrigue and magnanimity in the North Africa city hinges on the glamour of Humphrey Bogart and Ingrid Bergman, of course. But it gets much of its juice from the marvelous, multicultural supporting cast, especially Claude Rains as the cheeky police captain.

The Maltese Falcon—A slightly earlier display of Bogie’s star power, this time in one of the prototypical noir mysteries, adapted from the Dashiell Hammett novel and directed by the great John Huston. This one has a great supporting cast too, from Mary Astor’s femme fatale to Peter Lorre, Elisha Cook Jr. and the wonderful Sidney Greenstreet as the rest of the shady characters.

Shane—Alan Ladd plays the title character in this superb western by George Stevens; the debates it dramatizes over the place of guns in our society have yet to be satisfactorily resolved. The ever-hapless Elisha Cook, Jr. unforgettably meets with more misfortune again here, this time from scary gunslinger Jack Palance.

Rio Bravo—One of John Wayne’s most persistently enjoyable westerns pits him, drunken deputy Dean Martin, youngster Ricky Nelson, oldster Walter Brennan and a few others against the forces of bullying evil. It was filmed at Old Tucson Studios.

Rebel Without a Cause—Nicholas Ray’s eccentric melodrama about a youth who gets into trouble despite coming (gasp!) from a “good” home was one of the handful of lead roles by the brilliant, short-lived James Dean. He’s pretty electric.

East of Eden—Dean was also powerful in this adaptation of the John Steinbeck novel, from the same year (1955).

It’s a Wonderful Life—Well, it’s still July for a few more days; why not celebrate Christmas now by watching Frank Capra’s bighearted tale of the incalculable value of every person?