School gyms are locked, the volleyball nets still in storage closets. Running trails are used only by rabbits and coyotes.

There is no normal. There hasn’t been for months in high school sports since the onset of the COVID-19 pandemic. Training camps for fall sports – football, cross country and girls’ volleyball – should be in full swing now with the first competitions less than a month away.

As with the balance that politicians must weigh between public safety and survival of the economy, there is a balance, too, with high school sports. Thousands of people in Arizona have paid with their lives during the pandemic. High school athletes paid only with their canceled spring sports seasons. They now have a wary eye on the upcoming fall sports seasons that have been delayed and could be delayed further – or even canceled.

High schools do not have the resources that professional and big-time college sports have to isolate athletes and frequently test them for the virus as they attempt to proceed with their seasons.

So the prep warriors are losing team training as well as recruiting opportunities as the fate of their upcoming seasons remains out of their control. The Arizona Interscholastic Association, which is the governing body of sports in the state, along with school district and athletic officials and health-care professionals continue to evaluate and revise best practices and time lines. What’s feasible? What’s safe?

The Seton Catholic Prep athletic department is representative of the limbo at high schools across Chandler and Tempe.

For the athletes, for whom an athletic scholarship might be the only way they get a college education, the waiting game is excruciating.

The 5-foot-8 Martinez, 16, of Chandler, made the varsity as a freshman two years ago. Last season as a sophomore, she was named 4A Desert Sky defensive player of the year and all region at libero by AZPreps365. She also is an outstanding student. Martinez already has the eye of college recruiters. She has been in contact with NCAA Division 1 Power 5 schools and Ivy League schools. She does not yet have a firm offer in place. She was counting on summer exposure in club camps, which were canceled, as well as in the upcoming season.

“I am looking for academic and athletic supplements to my college tuition,” she said.

Athletes can self-promote on HUDL and MaxPreps, online services where video of past seasons can be posted for college recruiters.

“I’m having some difficulty with that right now because the last time I played in a major tournament was last season, 2019,” Martinez said. “Recruiters like to see the athlete in person, what the person looks like and how they play, their body language, things like that that are really important.”

Live scouting can better tell recruiters what kind of teammate a player is, how they take coaching and what their temperament is when things aren’t going the best.

“At Seton, one of the things we really focus on as a team are soft values – grit perseverance, determination – on every single play,” Martinez said. “I think that’s what recruiters look for because they want to recruit a kid that’s going to have a positive impact on their program, someone who wants to go in a gym and work every day. Those intangible aspects of their personality are something that you can’t recruit off of HUDL.”

Currently, the AIA has set Aug. 17 as the first day that teams can begin practice for fall sports. The first week that competition may begin is Sept. 7.

But those are moving targets, based largely on directives by Gov. Doug Ducey. Football teams already have canceled early-season games in August, typically against out-of-state schools.

Gump and his Seton baseball teammates have more time because theirs is a spring sport. However, the 6-foot-2 Gump, 17, of Chandler, goes into his senior year after having just lost his junior season last spring that could have been critical to his recruiting fortunes. He was just coming onto the scene after a fabulous sophomore season on varsity, where he hit .453, had a .513 on-base percentage and stole seven bases. AZPreps365 named Gump to the 2019 4A Desert Sky all-region first team at shortstop and to 4A second-team all-state. He has interest from Grand Canyon, San Diego State, University of San Diego, California-San Diego and Loyola Marymount.

“I’m still looking to find the right fit for me,” Gump said. “It’s definitely been difficult. Junior year was going to be big for me in terms of recruitment.

“I continue to put in my work on my own and keep encouraging our younger guys to stay socially distanced but still get their work in. That’s kind of all we’ve got right now.”

Those hurt most by the pandemic are underclassmen – juniors, sophomores and freshmen – who are trying to make their mark. Recruiters knew most of the incoming seniors years before the pandemic hit.

“The pandemic is an experience that’s new to everyone,” Martinez said. “College recruiters are trying to figure it out just as much as the athletes are, so it’s important to really recognize that the best way to go through this process is to just be patient and communicative with all the coaches. We’re all just playing it by ear right now.” 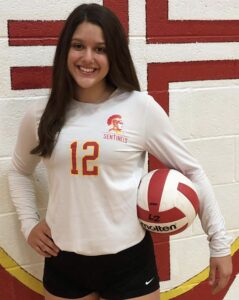 James Johnson, the Seton Catholic girls’ volleyball coach, has about a half-dozen college prospects on his team, including Martinez. He is keenly aware how important sports are in the lives of his young athletes, with whom his communication is largely via email or Zoom.

“With us, it’s student-athlete, it’s not athlete-student,” said Johnson, the 4A Desert Sky region coach of the year last season. “They are students and they’re using volleyball to get to their schools. In theory, that player may not have the money to go to the school that they want to go to, so it’s a big challenge among the many challenges that COVID-19 is showing us right now.

“My message to them, and it’s a simple message, is be better today than you were yesterday. I tell them that life is going to throw you curves, and this is one of those curves. You need to keep focused on being better, being better in school, being better as an athlete. Sometimes that involves your workouts at home and taking the time and the disciple to get up off the couch to go out in your driveway, your backyard or a park by yourself.”

Gregg Buchanan, the Seton Catholic athletic director, believes that by following guidelines with social distancing, hand washing and mask wearing that there is a good chance fall sports will proceed, albeit with a late start and shortened schedules, even if students are at home taking their classes online in the fall.

Martinez and Gump understand that public safety is the guiding factor in decisions regarding high school sports in the 2020-21 school year.

“Obviously, the safety of the country is of the utmost importance,” Gump said. “But I think sports help a lot of people, not just in our area but all around the world. Sports have an amazing impact on people. I know people who wouldn’t be the people they are without sports. That’s very important and shouldn’t be looked past.”

“Being part of a team has definitely taught me so many life lessons that you can’t teach anywhere else,” she said. “That’s what I really miss from volleyball, for sure, being with my team, that close connection.

“Even though the season is coming up there is still a lot of fluctuation going on with the COVID numbers. So it’s a really tough call to make. If there is a way you can prevent the spread as much as possible I’m all for going back to play, but I also have concerns about the better health of the world. If we all work together, we can make it happen.”

Lee Shappell
Lee Shappell became a journalist because he didn’t become a rocket scientist! He exhausted the math courses available by his junior year in high school and earned early admission to Rice University, intending to take advantage of its relationship with the Johnson Space Center and become an aerospace engineer. But as a high school senior, needing a class to be eligible for sports with no more math available, he took student newspaper as a credit and was hooked. He studied journalism at the UofA and has been senior reporter, copy desk chief and managing editor at several Valley publications.
Previous articleCOVID survivors offer a lifesaving gift of plasma to other victims
Next articleA holiday from cooking