Editor’s note: Our writer Lee Shappell interviewed Tempe Police Chief Sylvia Moir for our last issue re­garding the use of force and the recent racial unrest in response to the killing of George Floyd in Minnea­polis. The following is a continuation of that Q&A. To read part one, visit wranglernews.com 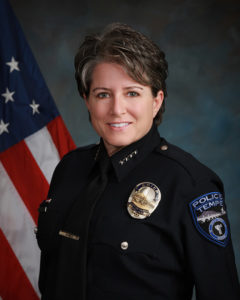 Q: As rioting and violence spread across the country, where peaceful daytime marches against racism and the technique used by the Minneapolis PD give way, do you believe this is all really about Mr. Floyd?

A: The tragedy and the pain and the anguish of those moved by Mr. Floyd’s death is very real, and that calls on all of us to examine equity in action and equity in government service and how we engage there. I’m not in the position of those who are marginalized but I certainly can understand their anguish and pain.

But at night, it’s a criminal element that is opportunistic. I entered policing in July of 1988. Much of the social anguish is in my DNA, my history. And being in California, I’m informed by the Rodney King riots, when LAPD gave up ground at Florence and Normandie. We learned from that. Their focus was it’s just property crime, let’s focus on people. What we learned is that when one property crime is ignored the symbol of the institution is on fire. To give up ground and you don’t protect property empowers and emboldens a criminal element. People died after that. Businesses were lost after that. There was harm done for days after that.

I clearly see the distinction between our constitutional imperative as police officers to give people space and safety to protest, and we have done that over and over. But to examine them through the same lens as those rioting at night is improper and it is a trap. I’m arguing that we employ tactics that are different. We hold them accountable to the rules. The peaceful people deserve that.

Q: Did the Minneapolis PD cede credibility when it backed off and essentially sacrificed its 3rd Precinct building?

A: The symbol of the institution is gone and what is the result? I’m very concerned socially about what is occurring. And we’ve seen signs of it even in Tempe about giving people time and space to vent in places where it’s inappropriate. I don’t think we can just allow people to vent grievances and frustrations in ways that lack dignity and respect.