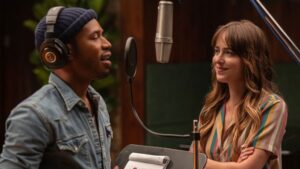 The High Note—Tracie Ellis Ross plays a superstar pop singer. She’d like to work on new material; her handlers, led by Ice Cube, want her play to it safe with a Vegas residency. Dakota Johnson plays her put-upon personal assistant, who of course is an aspiring music producer. Kelvin Harrison, Jr. is the inexplicably obscure young mu­sical prodigy the assistant falls for, and would also like to produce.

Although I don’t know if audiences will (or should) share my reasons, I liked this movie, precisely because it was an undemanding big-budget indulgence; a pop-music story without a lot of drug use or other torturous, tire­some self-destructive behavior on parade.

Although Dakota Johnson is attractive and agreeable enough as the reckless heroine, the star performance is the charming, funny Tracie Ellis Ross; defiantly batty, mercurial and high-maintenance, but not a villain. Mostly thanks to Ross, The High Note stays on-key.

Streaming online, and playing onscreen at Roadhouse Cinemas in Scottsdale. 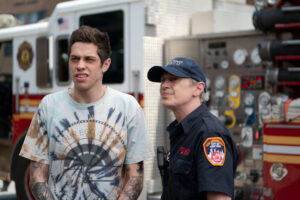 The King of Staten Island—Although undeniably funny in the right dosage, the Saturday Night Live comedian Pete Davidson never struck me as a having a broad range. But playing the semi-autobiographical title character in this, his first star vehicle, he shows the ease and emo­tional accessibility of, well, a star.

The son of a firefighter who died in the line of duty—Davidson’s real-life dad died in the 9/11 attacks—Scott is funny, intelligent, likable, even charismatic, but also trau­matized, stuck in adolescence, and quietly, almost uncon­sciously desperate.

Even for Scott, though, change is of course inevitable. His younger, better-adjusted sister (Maude Apatow) heads off to college, and soon his Mom has started a relation­ship with another firefighter (Bill Burr).

Scott responds to it all with bursts of edgy anger—something like Adam Sandler without the mannered ec­centricity—offset by a peculiar gentleness that suggests self-awareness and the potential for growth.

Like many of Apatow’s movies—others include The 40-Year-Old Virgin and Knocked Up—this extremely foul-mouthed film meanders around at a dawdling clip, explor­ing subplots and secondary characters, setting up gags that will pay off far down the road, if at all.

Not everything works, but it’s a natural approach for a movie about an aimless hero, and we keep rooting for him.