As the economies of Tempe and West Chandler gradually adjust to the new normal in the aftermath of the shutdown, business owners and their clientele are learning to navigate uncharted waters.

From restaurants to dental practices and gyms, those who operate businesses say they were hard-hit by the shutdown but are here to stay.

Ward Walston, co-owner of Great Harvest Bakery, said that before the shutdown, sales were split—50 percent flowing from the lunch crowd and catering services, 50 percent from bread and other baked goods. When the lockdown was announced, catering dropped to zero. 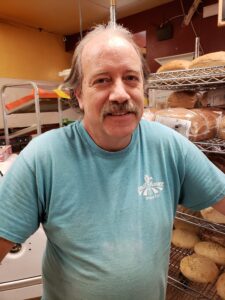 Gov. Doug Ducey’s order, which followed national guidelines, forced restaurants to switch to take-out only and asked residents, with a few exceptions, to stay home unless they were engaged in essential businesses. The effect on local entrepreneurs has been staggering.

“Everything has gone down,” Walston said.

“Lunch has gone to pretty much 5 percent of our business. It’s coming back, but we still don’t know about the future. We’re selling more bread and more grocery items that people can take home and make themselves. They want a lot more bread.”

Walston’s son George, who manages the enterprise, concurred. “For the most part, people still weren’t interested in dining in, whether they don’t feel safe or they’ve got somewhere else to be, so we weren’t seeing a particularly large number of people wanting to come in here at the bakery,” George said.

Then there’s the issue of not being able to get important items like beef for roast beef sandwiches.

“I’ve had roast beef on order for two weeks and it’s not due in for at least another week,” Ward said. “Supply-chain issues are going to start hurting a lot of restaurants. Yeah, they’re open, but they can’t get the supplies they need to be open. “

And yet, when Ward looks at his numbers each evening, it looks like the family-owned business is making it.

“At the end of the day, it looks like we’ve done a fair business and sold a fair amount of bread. That’s a good thing. It’s not as if we’ve died.” As he mulls things over, it becomes crystal clear: “If we wouldn’t have had the bread component, yeah, we’d have been in trouble.”

George says the family is considering installing a misting system to make eating outdoors at their location more comfortable. With a covered patio and breezeway just outside the front door, they’re hoping to draw a crowd.

Elaine McCombie can relate. She’s owned Bogey’s Sports Bar & Grill in Tempe for 12 years and says the shutdown posed significant challenges. “The no-dining-in was extremely difficult because we had no set guidelines,” McCombie said. “Every (police) officer that came by, any person you spoke to, nobody was clear on what the actual rules were and that was what our biggest concern.”

McCombie said an officer who visited Bogey’s told her they had received anonymous complaints about the establishment but reassured her she was doing everything right.

“He said the number one thing is to try to encourage social distancing. That is the very number-one thing they were looking for.” And that has proven the most challenging, both during the shutdown and its aftermath, she added.

“A couple comes walking in together, out of the same car together, living together—how do you social distance them? I’m not going to tell them they have to stand six feet apart when they’re married,” McCombie says. Seating at the bar has been reduced from 30 barstools to eight. Patrons seem oblivious and move stools closer or simply stand beside each other.

In spite of all the challenges though, McCombie seems to have rolled with the punches and developed some survival strategies. One of the first things she did was to create a quarantine menu that offered bargain take-out meals for families of four. A specialty pizza and wings goes for $20.

“Some of our regulars purchased $200-$300 off the quarantine menu and had it delivered to the hospital,” McCombie said. Others delivered the meals themselves to local police and fire stations.

“People were stepping up and trying to take care of first responders and we were lucky enough to be in the middle of that,” McCombie says.

Unlike restaurants, gyms and fitness centers across the nation, as well as in Tempe and West Chandler, were completely shut down for nearly two months. When the word came that gyms could begin to reopen, Gerry Lee, owner of MegaFit, headed to his West Chandler establishment to clean and reorganize.

He had suspended all his clients’ dues during the forced closure but he still had bills to worry about. With social-distancing requirements, those bills might be tougher to pay.

“I’m moving machines around to create some distance in between them and I’m actually going to move a machine out of the way so I can spread everything out,” Lee said. “So I am going to have fewer clients per class now. With a lot of people being at home and the schools being out, we didn’t know how to put a schedule together—we don’t know who is going to come when.”

He’s applied for a Paycheck Protection Program loan but hasn’t heard anything back yet. Still, he remains hopeful. The former vacancy on the bottom floor of the building he occupies is now a popular restaurant. With a video monitor downstairs that shows of the MegaFit training classes, Lee is sure he’ll snag new clients. “I think we’ll get a lot of people that way.”

Mark Tracy of Tempe Smile Design is also cautiously optimistic. The dental practice was closed to all but emergency services during the shutdown. He says they kept their staff on the payroll instead of furloughing them. “Being closed for six weeks and still having bills to pay was extremely tough. We did not get the first round of the Paycheck Protection Program,” Tracy said.

When patients received word that Tempe Smile Design was again open for non-emergency services, they began calling. Stringent safety procedures, such as having patients wait outside, taking their temperatures once they enter and making them wash their hands are all part of the safety protocol.

“We’re surprisingly busy. People are happy to come back to the dental office,” Tracy said. “We’re happy about that because we need the cash flow after being shut down for so long.”