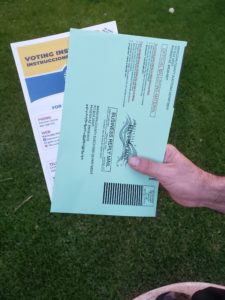 Tuesday, March 10 is Election Day in Tempe and Chandler. Local governing board and city elections are nonpartisan, meaning a candidate does not have to publicly declare a political party affiliation to run and serve in those elected offices, and the election ballot does not list such affiliation for candidates in those elections.

The law does not require citizens to vote, officials note, but voting remains an important right in any democracy. Being informed about the voting process, candidates, ballot measures and various elections is a start to making individual voices heard in local, state and national elections involving the issues, policies and laws that impact communities and their residents each day.

Both Tempe and Chandler city elections are Ballot By Mail, which means all qualified voters receive a ballot in a yellow envelope about a month before the election.

Voters who reside in Tempe and Chandler must have been registered to vote by Feb. 10; ballots have already been mailed to qualified voters.

Ballots will look a little different for these upcoming elections, with oval bubbles to fill in instead of the previous arrow lines.

Ballots must be signed (with phone number added), sealed and mailed in the green return envelope to be received no later than 7 p.m. on Election Day to be counted. Postmarks do not count.

There will be no polling locations open on that day.

For those who do not mail their ballots in time to be counted on March 10, signed and sealed ballots can be dropped off in the green envelope to either of these Maricopa County Recorder/Elections Department locations, which are also designated Ballot Replacement Centers, from Feb. 12 through March 10, Monday-Friday 8 a.m.-5 p.m. at 510 S. 3rd Ave., Phoenix, or 222 E. Javelina Ave., Mesa.

Chandler voters can pick up replacement ballots or turn in their signed and sealed ballots at: Chandler City Hall, 175 S. Arizona Ave. Hours are 8-5 March 2 through 6 and 8-5 March 9. Election Day hours are 6 a.m. to 7 p.m.

If you haven’t yet received your ballot for the Tempe or Chandler election, it may mean you are not registered to vote or you didn’t submit a change of address.

If you are a registered voter but didn’t receive a ballot, you can visit a Ballot Replacement Center location listed below to print and submit a ballot.

You also can check the status of your returned ballot at beballotready.vote to see when your ballot has been received and counted or text “Join” to 628683 to receive automatic ballot status updates.

Qualified registered voters in Tempe will be selecting three candidates for City Council and one candidate for mayor. Tempe election and candidate information is available at tempe.gov/election.

On March 10, Chandler voters will be voting on Proposition 426 which proposes an amendment to the Chandler City Charter regarding the timing of city elections to align with state law changed in 2019.

Qualified Chandler residents must be registered by July 6 to vote in the Chandler Primary Election on Aug. 4. A list of qualified candidates for the Chandler City Council Election will be posted on April 6.

More information on the Chandler Special Election on March 10 and Council elections is available at chandleraz.gov/elections.

But wait, there’s more…if you are a registered Democrat. March 17 is the presidential preference election for registered Democrats to select from the field of candidates they want as the Democratic nominee in the Aug. 4 Primary Election.

Qualified voters must have been registered as a Democrat by Feb. 18 to vote in the March 17 PPE election.

Voter registration must be completed 29 days in advance of an election, but registrations don’t expire. To register for the first time, check the status of your voter registration, update current address, political party or permanent early voting status go to servicearizona.com, or contact the Maricopa County Elections Department at 602-506-1511.

You can register to vote in an Arizona election if you are a citizen of the United States, a resident of Arizona, at least 18 years old by the date of the election, not a convicted felon (unless civil rights are restored), and not adjudicated incompetent per A.R.S. 14-5101.