Rockin’ & rollin’ for a cause: Helping kids beat the battle against cancer

Editor’s note: As if Noah doesn’t have enough to stay busy while he’s pursuing degrees in Global Studies and French at ASU, working for us — and following the officer-training regimen prescribed by the United States Marine Corps — he finds yet another passion: triathlons. While he didn’t sign up for the Rock ‘n’ Roll Marathon, we couldn’t think of a better candidate to cover this event for us.

The feeling in a runner’s gut immediately before a race is never forgotten. Each competitor’s heart runs a race of its own while the mind reassures the rest of the body that the pain is only temporary.

The runner toes the line.

Breathing slows—the heavy beat of the entrant’s heart appears to drown out all other sounds. Seconds before the starting gun blasts, the runner’s gut fires itself into action and all feelings of nervousness are overcome by concentration. 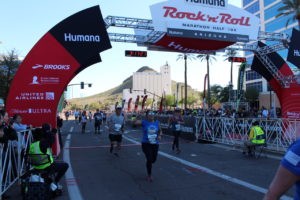 This may be a common ritual for athletes in other races, but runners from the 2020 Humana Rock ‘n’ Roll Marathon series might’ve jumped and jived their way across the starting line to the rhythm of ‘80s rock instead.

Dance moves induced by AC/DC and Duran Duran filled the streets of Tempe on a recent Sunday morning as thousands of runners conquered the marathon, half-marathon and 10k races.

The course led runners through downtown Tempe into Papago Park and around some areas of Scottsdale and Phoenix, depending on the distance each runner chose to undertake.

The race series derives its name from the local rock bands that play along the course, their involvement designed to give runners a chance to slow down to a half-jog, half-dance pace every few miles if they feel the urge.

For the final leg of the race, athletes run south on the Mill Avenue bridge, turning right onto Rio Salado where friends and family members cram up against the railings to watch the runners sprint past the finish line—all to the deafening roar of classic rock accompanied by cheering from the crowd and commentary from the race announcer.

Participants in the Rock n’ Roll Marathon series range from fun- seeking Arizonans attempting to satisfy New Year’s resolutions to elite marathoners from across the country focused on beating a previous record.

A few runners were seen wearing costumes of varying wackiness, such as some in giant banana suits or others as Elvis Presley doppelgangers.

The race-inspired hilarity didn’t end with the athletes’ antics, however. All along the race route, spectators gathered to cheer for loved ones, many with signs bearing quip-inspired phrases of encouragement. Others simply gave donuts or beer to the racers who had become desperate enough for a pick-me-up.

Despite the overwhelming sense of fun and excitement at the Rock ‘n’ Roll marathon, many runners completed the challenge with purposeful sobriety.

Bret Lane from Seattle and Rory Hjelmaa from New York helped raise $15,500 in support of families who are suffering from illnesses. “All of the money will go to St. Jude’s Children’s Hospital to support kids with cancer so that their families don’t have to pay any money,” says Lane.

“It’s a huge deal,” he said. “I have three family members that are dealing with terminal cancer right now, so they’re my inspiration. Their battle is way bigger than running a marathon.”

At age 57, Lane ran the marathon in 3 hours and 13 minutes, while Hjelmaa finished just behind him. They trained and raised money for the race for over a year, according to what they told Wrangler News. Their ultimate goal is to raise $1 million.