Reminder from a Dignity ER doc: Flu season is no joke 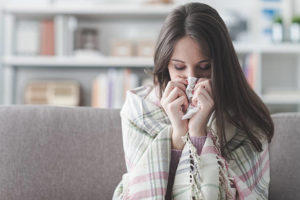 As welcome as the changing weather may be, it can also bring unwanted guests. It’s always a joy to turn the air conditioning off and open the windows, but the colder it gets outside, the more likely we are to encounter flu.

The flu, or influenza, is a common viral infection that afflicts people year-round.

Considered to be “in season” from early fall to the end of winter, flu is something to be especially cautious of now. Symptoms can include fever, cough, headaches, body aches and stomach issues.

After speaking with Dr. Glen McCracken, the medical director of Dignity Health’s Freestanding Emergency Department, it’s clear that the flu is no joke.

McCracken explained that during the winter months people’s immune systems are weaker due to cold weather, and that can allow for the flu to find its way to a host.

Asked who the most prone populations are to the flu, McCracken’s answer was simple: the young and the elderly.

“Those with weakened immune systems are undeniably most at risk,” he said.

He noted that with age, chronic conditions can also contribute to being “immune-compromised.” Certain medications and practices such as chemotherapy inadvertently weaken immune systems, making the flu especially dangerous and caution especially important.

When asked how he recommends stopping it, McCracken preached prevention.

“There’s a lot of things to do, and prevention is the most effective strategy out there.” he said. Always washing hands and getting an appropriate amount of sleep are among ways to keep the immune system healthy.

“I get the shot every year, and I think it’s important for everyone to do so, too.”

To err is human however, and sometimes prevention isn’t enough. When the flu strikes, McCracken offered a few different treatment suggestions. Anti-viral medications like Tamiflu, if taken within the first 48 hours of infection, can be effective.

“There’s plenty to do at home, too—get rest, treat the fever, make sure you’re drinking plenty of fluids, and give yourself a chance to rest,” he added.

Periodically, complications arise, and in such a case a visit to urgent care or the hospital might be advisable.

Nicholas Johnsen
Previous articleBaking treats for your family is a treat for this family, too
Next articleMCC forum alerts young women to tech career futures