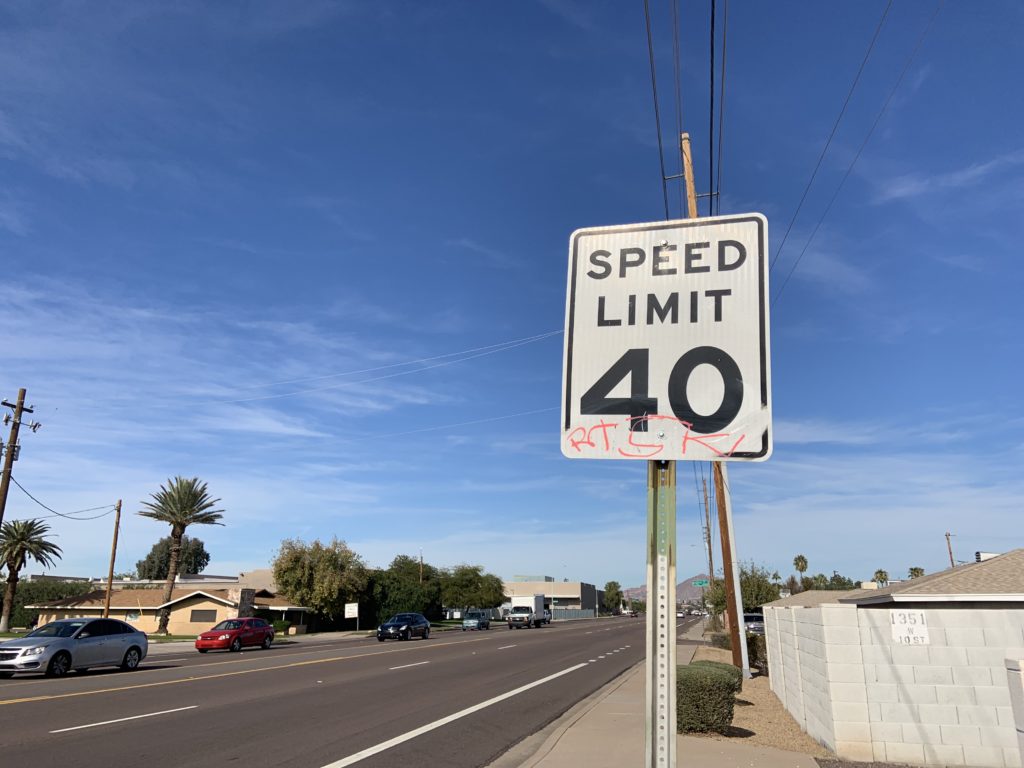 Editor’s note: The following commentary from Lauren Kuby, a member of the Tempe City Council, was originally written for the December 7th print edition of Wrangler News.

The City of Tempe prides itself on being first in the state to advance effective public policy. Last year, we became Arizona’s first Vision Zero city, pledging to reduce traffic fatalities and serious injury crashes to zero.

To walk the talk on Vision Zero, Tempe is now considering using a “Safe Systems” approach to setting speed limits. Rather than expecting perfect behavior from drivers, pedestrians, and bicyclists, this approach recognizes that people will make mistakes, and systems will fail. The goal should be set speed limits so that when someone errs, the penalty is not death.

Our community suffers from a traffic fatality crisis. In the past five years, 60 lives have been lost on Tempe streets. The single biggest danger to Tempeans involved in car crashes is vehicular speed—1 in 5 high-severity crashes are speed-related. There are three main reasons why Tempe should slow down:

If a driver crashes into a pedestrian at 50 mph— an all-too-common speed on our arterial roads, the person hit has a 75 percent chance of dying. At 30 mph, the risk of death falls to 20 percent.

Here’s what we know: driving at higher speeds increases the stopping distance (the time to react plus the time to brake), resulting in more crashes. At high speeds, crashes are also more severe, as the energy involved in stopping increases as speed rises. Once cars travel over 20 mph, they rapidly become more deadly.

Lower speed limits will reduce crash fatality rates for everyone, but especially for seniors, who have the highest risk of death and injury on our roads. At 40 mph, 45 percent of people will die if they are struck, but 70 percent of those over 70 will die.

You might assume that lowering speed limits would increase congestion and travel time. Have
you heard the phrase “hurry up and wait?” It’s the phenomenon of drivers speeding through traffic, only to be stopped at the next red light.

Most of the day, cars aren’t traveling the speed limit, due to traffic congestion. Speed comes into play more in the early morning and late at night— when people are harder to see, drivers are more distracted or impaired, and when the roads are wide open.

Lower speed limits are more efficient and convenient. Lights are timed to the posted speed limit, so lower speed limits mean more green time for both the street and the crossing street. Fewer crashes result, which helps to reduce congestion.

We are seeing an increase in alternative modes of transportation across our multi-modal city.

By lowering speed limits, we commit to creating safer roads for everyone, encouraging people to get out and walk or bike more, which reduces carbon emissions by taking vehicles off the road.

Our roads are changing because we are changing. If we want safer streets for all, we need to manage that change.

While lowering speed limits by 5mph is not THE solution and must be matched with enforcement, it propels us one step closer to our Vision Zero goal.

As elected officials, we have a moral obligation to lead on and follow through on important issues, especially as they relate to our highest priority— public safety.

If we can save even one life by reducing speed limits—it will be worth it.

Want to hear from our transportation experts about how safer speeds save lives, improve traffic efficiency, and create friendlier roads for all?

Join our information sessions on Nov. 21, Dec. 11 or Dec. 14. Learn more at tempe.gov/VisionZero.