“There’s just no way to fully heal from that.” Such were the sobering words spoken to attendees at a presentation held at a Tempe church regarding the thorny issue of human trafficking.

Global Connections International, an organization that focuses on educating the public on human trafficking, sent Julia Weber, its communications and marketing director, to help spread their message. According to the team, this issue within local communities is one that needs residents’ utmost—and immediate—attention.

GCI estimates that more than 40 million people around the world are victims of sex-trafficking. According to the National Center for Missing and Exploited Children, many of these victims may come from the foster care system.

Their report says, “In 2018, 88 percent of the endangered runaways reported to NCMEC as missing who were identified as likely child sex trafficking victims were missing from a foster care or group home placement.”

Prevention is No. 1 goal

The industry generates over $152 billion annually, making it the fastest growing illegal enterprise and the second-largest criminal industry across the globe.

For several months, Weber and the GCI team have traveled the United States with a mission to educate communities on the terrors of human sex trafficking, with an ultimate goal of preventing any more children from becoming victims in the industry. “We’ve committed to helping protect America’s youth,” Weber stated simply.

Over the course of 19,500 miles and 38 states, the Colorado-based organization has utilized a state-of-the-art truck and trailer with TV monitors, billboards and interactive learning materials to help people learn more about the process of sex-trafficking. 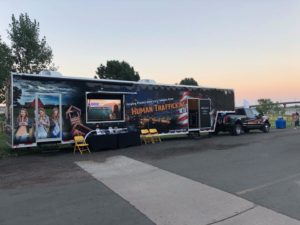 Portraying life as a sex-trafficking victim

Walking through the exhibit, visitors are quick to learn ways to identify the signs of a child being lured by a “buyer,” as well as how to avoid getting caught in these situations themselves.

Then, several video interviews with teenagers are played, describing the life within a sex-trafficking ring and the devastating consequences that come thereafter.

Arizona Community Church, a local congregation near Corona del Sol High School, hosted the GCI team and prompted church attendees to take a tour through the trailer in hopes of raising awareness of this problem that is so prevalent even in the local community.

“One victim we came into contact with out in Colorado was being sold in her gated community,” Julia said.

“She was living at home, going to school every day, playing tennis and she would be visited during the week by her friends’ fathers. She would walk through the halls of her church on the weekends and see men who visited her during the week.”

Weber went on to describe how today’s human trafficking is not the “snatch-and-grab” style that many people think about, as they may recall from movies like Taken. Instead, sex trafficking often occurs by luring teenagers into the work and convincing them to submit to horrible conditions of sexual abuse, eventually letting them believe that they are loved and wanted by the sex traffickers. 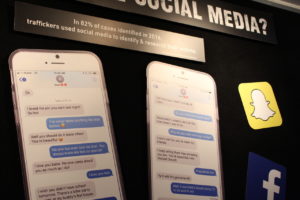 Unfortunately, according to Weber and the rest of GCI’s research, the prevalence of human trafficking today has become much more privatized as social media and other internet tools can be used to communicate, lure and move people around.

“It used to be that the buyers had to put themselves out there to get what they wanted. Now it has become so much easier for them to be more private,” she says.

Social media applications such as Snapchat, WhatsApp, TikTok and Bumble are among a number of popular methods for secretly sending or storing illegal transactions and media files.

With modern technology in the sex trafficking industry, buyers can actually “place their order” online by selecting the specific type of sex slave (boy, girl, younger, older, race) and then setting up a meeting location and time. Weber and the team from GCI are seeking to help expose these criminals and protect the innocent children who are targeted.

At the founding of GCI in 2000, Weber and her parents originally worked in the global realm of preventing sex-trafficking, focusing their efforts on developing countries whose populations are more susceptible to criminal activity due to war and gang violence.

In Cambodia, they helped establish a safe house for victims of sex-trafficking, which is believed to be the first of its kind in that country.

in 2018, the GCI team made the decision to move their operations to the United States where they saw a need for educating families and communities on the harm that can be inflicted on their own children without proper knowledge on these issues.

Global Connections International also works with local chambers of commerce, police departments and schools in order to better understand how each community is working to set these children free from the bonds of sex slavery.

“We knew all about it ‘cause we hear about it all the time,” says one teenager who had the opportunity to walk through the trailer at Arizona Community Church. “But nobody ever put in the effort to show us the results of it and how to prevent it.”