Story and Photos by Joyce Coronel

Walking into the Tempe Public Library on an average Wednesday morning was less like a venture into a whispers-only sanctuary and more like a visit to a bustling community center.

Two women seeking signatures for a petition, alongside a local organization that helps the homeless, were on hand—and that was before patrons even reached the front door.

Just inside the entrance, Friends of Tempe Public Library operates a used bookstore. We’re not talking about a few dusty shelves of outdated books here. Vicki Linoff, who manages the enterprise, disabused Wrangler News of that notion immediately. The bookstore generates a whopping $100,000 in revenue each year. That includes online sales.

With a crew of 55 volunteers, the bookstore is highly organized and stocked daily. Novels are shelved by author, non-fiction by category.

“We get hundreds of books donated every day so we need a way to turn them over and keep them moving,” Linoff says. So where does she get all these tomes?

Private citizens, retired people, ASU professors who no longer have room, people who are downsizing to a retirement home and a local used bookstore help keep the inventory flowing. Linoff acquired 40 boxes of art books from a former professor who was moving out of state. 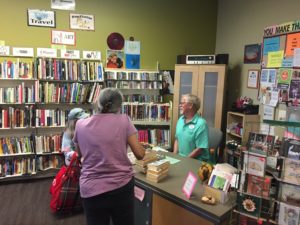 About 15 percent of the titles come from the library itself and include books that no longer get checked out or that the library has multiple copies of and no longer has room to shelve.

A selection of books from the bookstore is also available in the Connections Café. The Barnes and Nobel/Starbucks vibe draws more than a few customers, including a contingent of regulars. “A brother and sister come here every week to play pinochle just to get out of the house,” Linoff says. “There’s a mystery book club that meets here too.”

An adjacent classroom hosts lectures on a wide range of topics and packs a crowd.

Revenue from book sales sponsors the summer reading program and helps support the children’s section of the library housed in the basement. From new books to replace worn copies to updating the play area and adding a conference room, the funds are put to good use.

But used book sales at Tempe Public Library weren’t always the steam engine they are today. Years ago they consisted of a little nook in the back where patrons were on their honor to leave a donation in the money box after choosing a book.  A few times a year, the volunteer charged with the operation held a large sale in the basement.

Friends of Tempe Public Library came to be in 1980 and the bookstore opened in 1990.  Linoff, who alongside her husband once owned and operated an antique and book store on Mill Avenue, is in her element at the helm of the library’s retail space. 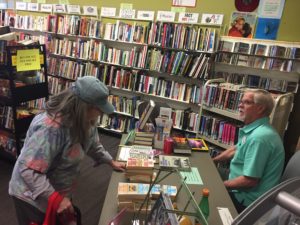 “I love it—I love books,” Linoff says. “You learn things you never knew about.” That includes what kind of books appeal to buyers. “Every day we never know what’s going to come in the door,” she notes. A medical book still encased in shrink wrap brought in $500 that day. Three times a year, the store holds a bag sale. “We sell a bag full of books for $10 and the last sale I think we sold 215 bags. So that’s a good boost.”

The next bag sale takes place Thursday, Dec. 5 through Sunday Dec. 8. There is a limit of five bags per day. Each week Linoff pens a poem that goes out to her email subscribers and tells them about upcoming sales. “Whatever you can do to get people in the door,” she laughs. “There are people who look forward to reading the poem.”