“When your focus is on the good, it makes life a whole lot better.” That’s the first thing that comes to mind when Minday Udall thinks of her career with the Tempe Elementary School District.

For the past four years, Udall has been the Positive Behavior Interventions and Support, or PBIS, coordinator, primarily supporting district-wide implementation of positive behavior at all 22 Tempe El sites.

“PBIS has many benefits, which include improved academic and behavioral success for students,” said Udall. “Students and teachers benefit when PBIS is implemented because more time is spent on instruction and less time on correcting behaviors.”

Each Tempe Elementary school has a PBIS committee, or integrates the PBIS framework into a leadership committee that analyzes behavioral data performs fidelity checks for school-wide implementation.

The committee discusses ways to communicate behavior expectations to students and parents, and how to positively reinforce students through monthly PBIS assemblies, student stores and positive referrals.

One way schools have reinforced positive behavior, according to Udall, is through principals and counselors calling parents directly to let them know when their students have received a positive behavioral referral at school.

“I appreciate going to our schools and seeing staff honoring students for their positive choices in behavior,” she said. “It is always a work in progress but we are moving in the right… direction.”

Recently, Tempe Elementary was awarded recognition by Positive Behavior Interventions and Supports of Arizona for its success with the program. Seven schools were awarded silver recognition, four with bronze and seven with merit. Fees College Preparatory Middle School was one of those earning the PBISaz Silver Award, which assistant principal Biju Padmanabhan said is due to “the tireless efforts of our teachers to build relationships with our students and focus on restorative practices—all while holding students accountable to the expectations that have been set.” 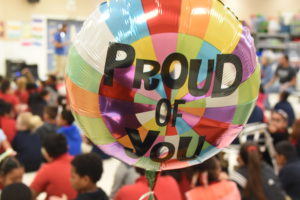 Heather Smalley, first-grade teacher at Aguilar Elementary, says she also has seen the positive impact that the PBIS program has had in her classroom.

Noted Udall: “I am absolutely amazed each day at the creative ways that Tempe Elementary schools are looking at positive behavior and making it even more meaningful.”