For Marcus Arnold, an SRP water-distribution technician, his 1 a.m. daily rounds were as routine as ever—until, that is, he began traversing one of the open-ditch laterals in West Chandler where he regularly distributes water.

Arnold reported that when he reached one of SRP’s grates, which are installed to prevent debris and people from entering as the ditch transitions into pipe, he noticed a dog sitting alone on the bank.

As he rolled down the truck’s window to check on the animal, Arnold said he heard whimpers from another dog trapped inside the grate.

Arnold quickly called a co-worker to help rescue the trapped animal. Once zanjero Alex Gutierrez arrived, Arnold put his construction and maintenance background to use and unbolted a small portion of the grate while Gutierrez kept an eye on the other stray dog. 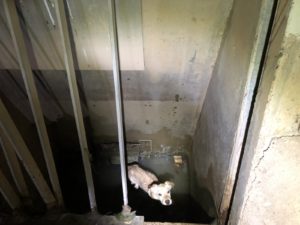 Once the metal grate was no longer attached to the wall, Arnold made a small lasso and pulled the frightened dog up five feet to safety.

Both men cared for the dogs by giving them food and water, but because it was still the middle of the night, there wasn’t much more they could do and the stray friends left safely together.

SRP zanjeros say they routinely come across animals as they deliver water throughout the Valley. They remind owners to always keep an eye on their pets around the canal and irrigation facilities.