Smoked out: Schools accelerate efforts to snuff out vaping epidemic

Seven deaths nationwide have been linked to vaping, and school districts in Tempe are stepping up their campaigns to educate students and parents about the ill effects.

Hundreds of people, including at least four in Maricopa County as of press time, have been hospitalized with severe lung damage suspected to have been caused by vaping.

In the Tempe Union High School District, which includes Corona del Sol and Marcos de Niza, an awareness campaign for students and parents, “Vanish the Vape,” began last school year. The district also has rewritten its discipline policies to deal with increasing vaping on its campuses.

“There are a lot of circumstances with teenagers when they’re caught doing something where there can be different levels of severity,” said Jennifer Liewer, TUHSD executive director of community relations.

“If caught with nicotine, you’re going to see either a two- or a three-day off-campus suspension.

“If a student is caught with a wax pen with THC, there are much more severe consequences because that is marijuana and that is an illegal drug. That’s a much more severe infraction. The first time, it’s a long-term suspension, however if they have drug- counseling appointments, they can reduce a long- term suspension to 10 days off-campus suspension.”

Through the first four weeks in TUHSD, there were 45 incidents for vaping in a district of 13,000 kids.

“That’s more than we were seeing on average at the end of last year,” Liewer said.

“We had a really aggressive education campaign for parents and for students last year. That was extremely beneficial. At the start of this year, we’re having to re-educate.”

The Kyrene School District, which serves area students in kindergarten through eighth grade, continues to actively seek ways to address the vaping epidemic, including bringing in powerful speakers, such as Stephanie Siete from Community Bridges.

“Last year, Kyrene even piloted the use of vape detectors in one of our schools,” said Erin Helm, communications and marketing director at Kyrene. “The devices were not as effective as hoped, and the district was able to secure a full refund. If the technology is refined, Kyrene would consider vape sensors again in the future.”

E-cigarettes or vaping are small battery-powered, smokeless devices that heat a liquid that typically contains nicotine. Some other vaping material contains tetrahydrocannabinol, or THC, the principal psychoactive component of marijuana, in a wax that is melted and inhaled. The device converts the liquid into a mist, which the user inhales. The exhale results in puffs of “vape” clouds. Flavored vaping material has been particularly popular among young, underage users.

Some believe that e-cigarettes and vaping are a healthy alternative to cigarettes, however, the U.S. Centers for Disease Control and Prevention has declared e-cigarettes unsafe for kids, teens and young adults. Not all kids who vape realize that e-cigarettes contain nicotine, which is addictive.

Vaping and e-cigarette use have skyrocketed onto the radar of health care and public officials in recent weeks. A U.S. Food and Drug Administration study found that more than 2 million middle school and high school students use e-cigarettes.

The problem is so bad at one high school in Alabama that doors were removed from bathroom stalls to counteract vaping. The FDA is now calling vaping and e-cigarette use an epidemic. Even President Donald Trump and Gov. Doug Ducey have weighed in on it.

They’re hopeful of impressing upon vapers and potential vapers that, when sounding the alarm about health risks, they’re not just blowing smoke.

Vapers counter that they are not blowing smoke, either, and that is the root of a disconnect that has made the use of e-cigarettes a national health epidemic.

In Arizona, it is unlawful to sell e-cigarette to minors, yet the products are easily finding their way into the hands of young people.

Consequently, the state initiated a sting operation targeting businesses that sell those products to minors. Store clerks can be fined as much as $300 and businesses as much as $1,000 for selling to minors. 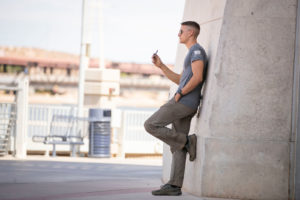 Five Tempe-area college students who say they have been vapers for two to three years and regularly use Juul and other vape products agreed to share their insights. Wrangler News is withholding their names. “Peer pressure and curiosity” led one of them into vaping.

“I don’t stoop down to peer pressure, and I denied it for a while, but eventually it just overwhelmed me to where I had to try it,” he said. “Once I did it, I was hooked.”

Another said that “curiosity killed the cat.”

Only one of the young people who commented reported being concerned about health risks. “I quit recently but I still hit other people’s (Juul),” reported one. Another acknowledged spending roughly $50 a month on vaping.

“You know there’s health risks of drinking too much caffeine right? That can put you in the hospital,” he said.

Another, after hearing the recent warnings, gave it up.

“One day when I got back home, I took all of them, put them in a pot of water and boiled them,” he said.

One device that’s popular is the Juul, which looks like a USB thumb drive. The company has been criticized by some officials who believe it is targeting young people in its advertising.

The company recently issued a statement emphasizing that it wants to be part of the solution in keeping e-cigarettes out of young people’s hands.

“Our mission is to improve the lives of adult smokers by providing them with a true alternative to combustible cigarettes,” the statement says.

CDC has not identified a cause of the lung diseases and deaths believed associated with
vaping, but all reported cases have a history of using e-cigarette products.

“There’s some talk that maybe it’s some of the oils in there or a compound that we just haven’t identified yet, because we also haven’t identified yet whether it’s the e-cigarette/nicotine version or whether it’s the THC version that’s causing this,” said Dr. Dan Quan, a medical toxicologist and interim chair of Emergency Medicine at Maricopa Medical Center in Phoenix.

“Until that common factor is found there is no way to know why or what the mechanism is.

“I think you can put the warnings out, but it’s like safety belts: People choose not to heed them. We’re making it really easy for kids to use this stuff. They’re small, they’re lightweight, they don’t generate much vapor at all. You can’t tell if people are doing it in class. There is a risk. I tell people don’t vape until we really know what’s happening.”

Lee Shappell
Lee Shappell became a journalist because he didn’t become a rocket scientist! He exhausted the math courses available by his junior year in high school and earned early admission to Rice University, intending to take advantage of its relationship with the Johnson Space Center and become an aerospace engineer. But as a high school senior, needing a class to be eligible for sports with no more math available, he took student newspaper as a credit and was hooked. He studied journalism at the UofA and has been senior reporter, copy desk chief and managing editor at several Valley publications.
Previous articlePrint Edition – September 21, 2019
Next articleChandler’s ‘hip-storic’ past comes alive in city’s downtown