“If you ever wonder what it’s like to fly in a rocket ship, I gotta tell you, it is a lot of fun.”

That is how former NASA Astronaut Mark Kelly introduced himself to a crowd of starstruck students at a recent all-school assembly at Arredondo Elementary.

Kelly paid a special visit to Arredondo due to the school’s recent designation as an A+ School of Excellence honored by the Arizona Educational Foundation.

Beginning his day with a tour of the school by Arredondo Elementary student ambassadors, Kelly then made his way to the school’s multipurpose building where he did a special reading of his children’s book Mousetronaut Goes to Mars and then answered questions from students about his time in space.

“Not a lot of students get this opportunity to meet an astronaut, so I feel really lucky that I got to meet Mr. Kelly today,” said fifth-grade student and student ambassador Brisa Santos.

He is also the husband of former U.S. Representative Gabby Giffords. As a naval aviator, Kelly flew combat missions during the Gulf War.

He began his career as an astronaut after being selected to become a NASA Space Shuttle pilot in 1996. 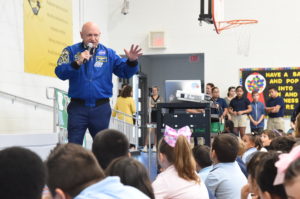 Kelly has been to space a total of four times. He flew his first mission in 2001 as pilot of STS-108, a Space Shuttle mission to the International Space Station flown by Space Shuttle Endeavour.

While reading his book to Arredondo students, Kelly encouraged students to reach for the stars and be a part of tomorrow’s fleet of astronauts.

“For our future space explorers out there, maybe one of you will make the trip to Mars,” said Kelly.

Arredondo Principal Alison Bruening-Hamati was especially proud of the opportunity for her students to meet and learn from an astronaut.

“I was really excited that Mr. Kelly’s team reached out to us because we are an A+ School,” said Bruening-Hamati. “It was an awesome opportunity for my students to be inspired to go beyond in their studies and reach for their dreams. This is something they are going to remember as adults—that an astronaut came to their school.”

Students worked together to come up with questions and elected a spokesperson from each classroom to ask Kelly questions about his time as an astronaut. Questions ranged from, “How do astronauts take a shower in space?” to “What’s the hardest thing to do when you’re training to be an astronaut?”

Kelly answered each question and connected with the students by making them laugh but also inspiring them through his responses.

To close out his visit, Kelly left students with one final thought.

“When I was your age, I had a hard time with subjects like math and science, but I stuck with it and was able to pursue a career I really wanted to do,” said Kelly.

“All your teachers here are really smart, so make sure you listen to them when they give you advice. Remember that if you’re ever having a hard time, they are also there to help. Go talk to your teachers, because they can help you reach your goals.”