Tempe police apprehended a suspected shoplifter after tracking a vehicle to the shopping center at Guadalupe and McClintock Friday afternoon.

At approximately 2 p.m. a police helicopter circled the Fry’s parking lot and issued a loudspeaker warning: “Halt. We see you. Lay on the ground.” 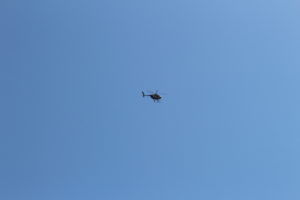 A number of police vehicles arrived, blocking off part of the intersection for a brief time and surrounding the suspect vehicle and 2 other people who they said had been in the same car. According to eyewitness accounts, the thief left his car in the parking lot and took off on foot toward Habit Burger before surrendering to police who made the arrest on the street corner.

Police say the suspect attempted to steal items from the Walmart at Priest and Elliot, then was followed by the air unit which aided police vehicles in the capture. Said a police supervisor regarding the other two suspects:

“It doesn’t appear at this time that they have any stolen items on them, so we’re just trying to find out how they were involved.”

The suspect will be charged on account of shoplifting as well as trespassing, according to officers at the scene.

Noah Kutz
Previous articleKindness: As school starts, a vital lesson to be learned
Next articleCity News: Tempe opens a door to affordable housing