Horses have been a ubiquitous presence in the Southwest since they roamed the Plains during the Pleistocene epoch 2.6 million years ago, and after their reappearance here in the early 16th century, brought by Spanish explorers.

Today, horses have persisted and still thrive, even in a densely urbanized setting, fundamentally linked with their human benefactors, as any drive through Tempe’s long-lived “horse properties” will attest.

Horses, it would seem, are here to stay.

And if you’re one of the lucky Arizona “horse people,” living among horses and delighting in the magic of the ageless horse-human bond, prepare to be profoundly challenged by the connection, says one lifetime Arizona horse handler.

“Your self-knowledge and ability to be completely forthright and honest with a horse, and with yourself, is primary. If you’re not, a horse is going to sense this the first minute they meet you, and you’re going to have trouble.”

Are horses psychic, then?

“No, not exactly psychic,” says Feldman. “I’d say they have an extraordinarily high level of what some call emotional intelligence. A horse doesn’t HEAR what you say— they FEEL what you say. And their differences in temperament make each one unique as you learn to live and work with them.

“So, if you’re a reticent person, and a horse is an assertive type, you can
be sure they’re going to try and take over, to dominate. You have to learn to deal with that, no matter what type of person you are—it’s a challenge.”

Feldman asserts horses’ ability to “read” humans is “instinctual. As beasts of prey, it keeps them alive.”

Evolved to flee predators—witness the large eyes made for scanning wide vistas; long, powerful legs for running away quickly—horses, Feldman explains, “are made to go AWAY from something.

“With dogs, it’s the opposite,”’ he says. “Their instinct is to go TOWARD something. Hence you see them straining forward, pulling their owners along on the leash.”

The tendency to move away is an integral part of horses’ prey instincts, and understanding this is key to working with them, he adds.

“Fear is a common emotion in horses related to their natural vulnerability to predators,” Feldman notes, “and when they feel it, they naturally—sometimes passionately— want to run away. You have to carefully watch for that.”

Feldman and his older brother, Jesse, took control of the family stables when their parents, Ron and Jayne Feldman, retired. The enterprise initially was one his father “kind of fell into,” Feldman remembers. 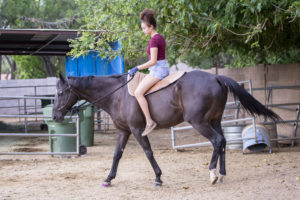 “My dad was originally from Buffalo, N.Y., and went to California for college,” Feldman recounts, “but as a kid he had read about the legend of the Lost Dutchman Mine, and figured Arizona wasn’t that far away, so he came over here to explore.”

After a time in Arizona, Feldman says his father eventually was able to buy property, and, as he wondered what to do with it, was approached by a woman with financial challenges who owned several horses. He subsequently offered her a good rate for boarding her horses at his place.

“The woman ultimately became unable to afford the board, and my father suddenly found himself in possession of a bunch of horses,” Feldman says. “So people started coming over to the stables to ride.”

Among the riders was Feldman’s mother, a California transplant, who came asking for riding lessons. After she and Ron married, the couple built the thriving enterprise the stables are today.

“So my brother and I grew up around horses,” Feldman goes on to say, “and we learned everything about them—how to keep a horse healthy, how to keep them going, how to inspire them.”

He adds one thing is key to that inspiration.

“A horse has to have a purpose,” Feldman declares, “and part of that purpose has to involve their need to move—they’ll never be happy or healthy standing around all day.”

Be a committed supporter, give a horse a purpose in life, and great things happen, he avers.

“A horse will work itself to death for you if you give it a purpose,” he says, “and in that, they’re just like us—we all need a purpose. So we’re not so different—working with horses is a lot like working with yourself.”

Feldman says he knows his horses intimately—what they’re capable of, what their limitations are.

“There are times we take experienced riders into the remote areas of the Superstitions, and for that, those horses have to be capable, both mentally and physically, of getting through the rocky terrain. Other times, other riders, we might need a slow, gentle animal.”

Running his family’s stables and ranch, tending, protecting, and training horses, and coming to understand the intricacies of a horse’s complex psyche, Feldman says, has made him who he is as a person.

“Horses keep you honest. I’ve learned more about that from them than from any other source,” he declares. “They also continue to amaze me, even as long as I’ve been around them.

“It’s incredible, what their perceptions are. If you approach them nervously, they’ll be wary and back away. They can read you like a book.”

The lesson for humans?

“Just to realize we, as humans, were once as perceptive and instinctual as horses are—but with the oncoming of modern culture and especially this pervasive electronic media, we’ve gotten away from, literally, our Selves. But working with horses, I can tell you, will teach what you most need to know about yourself.”