West Chandler neighborhoods generally are clean, upscale. Overall crime is relatively low. The city is No. 17 nationally on WalletHub’s list of Best Places to Raise a Family.

Residents believe that their westside neighborhoods are safe places to live — and they are — and that violent crime like domestic violence happens on the other side of town, in older, poorer neighborhoods.

That, according to Chandler Police Chief Sean Duggan, is wrong, and a map of domestic violence incidents in Chandler from 2015 to 2018 backs him up.

“It may look like it’s overrepresented up north (from Price to Gilbert roads between the Western Canal and Pecos Road), but those are dense populations, dense housing, a lot of apartment complexes,” Duggan said. “Domestic violence is also south, it’s north, it’s west.

“It’s where the people live. Domestic violence transcends geography, it transcends demographics. It doesn’t matter if you live in a $5 million house or an apartment or a trailer. There are no boundaries to domestic violence.”

That includes heavy pockets of incidents on the west side, from Interstate 10 east to Price Road, from Knox on the north south to Pecos.

In Arizona, one in four women and one in seven men have experienced domestic violence in their lifetime, according to the Arizona Coalition to End Sexual & Domestic Violence.

Domestic violence is defined as a pattern of coercive control where one partner uses power to control another. It can take many forms, including physical, sexual, emotional and financial abuse. 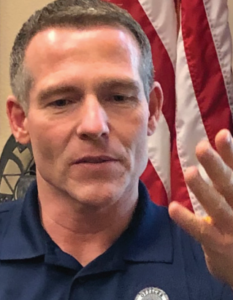 As Duggan points out, there’s really no crime of domestic violence.

When officers respond to a call, they are required to label their report “domestic violence assault” or “domestic violence trespassing,” as the case may be, to input into the department’s records management system to easily track what is happening and where.

Calendar year 2015 had been Chandler’s record low for crime. Thereafter, there had been an increase in the violent-crime rate, especially assaults and robberies, for a couple of years until an overall decrease made 2018 the city’s record-low year.

“But within that category of assault, we are still seeing a slight uptick,” Duggan said.

Identifying root causes of domestic violence in a city of 70 square miles inhabited by nearly 260,000 people is the tricky part, according to the chief. Impairment in decision-making — drugs or alcohol — often is present when officers arrive. Sometimes it is a family cycle. Youth have been exposed to their parents as victims or perpetrators.

“We have put tremendous energy and effort into that,” said Duggan, who has been Chandler police chief for 5½ years. “We’ve done a very good job identifying the victims, especially in sexual assaults. If we were able to identify root causes, we would be in a much better position.”

And, says Duggan, tools to further deal with the problem are improving.

The Police Department operates a Victim Services Unit, which received the 2017 Distinguished Service Award from the Arizona Attorney General’s Office in recognition of outstanding crime- victim advocacy. Last year, Duggan’s department opened a Family Advocacy Center in its building. Forensic interviews and exams can be done by specially trained nurses. It is a one-stop center so victims are not traumatized again by moving to different locations for different services and needs.

“It helps victims navigate the criminal justice system. It also provides prevention programs and all types of material, education and training so people have the awareness that domestic violence is not acceptable. There are resources and help for victims, so you are encouraged to come forward,” Duggan said.

“For potential victims, there also are crisis lines. There are nonprofits out there. There’s family and friends. Faith-based organizations. There is an army of folks that are absolutely ready and willing to help.

“At the very least, call the Police Department. We are the only government organization that’s awake 24/7.

“You can always call the police.”