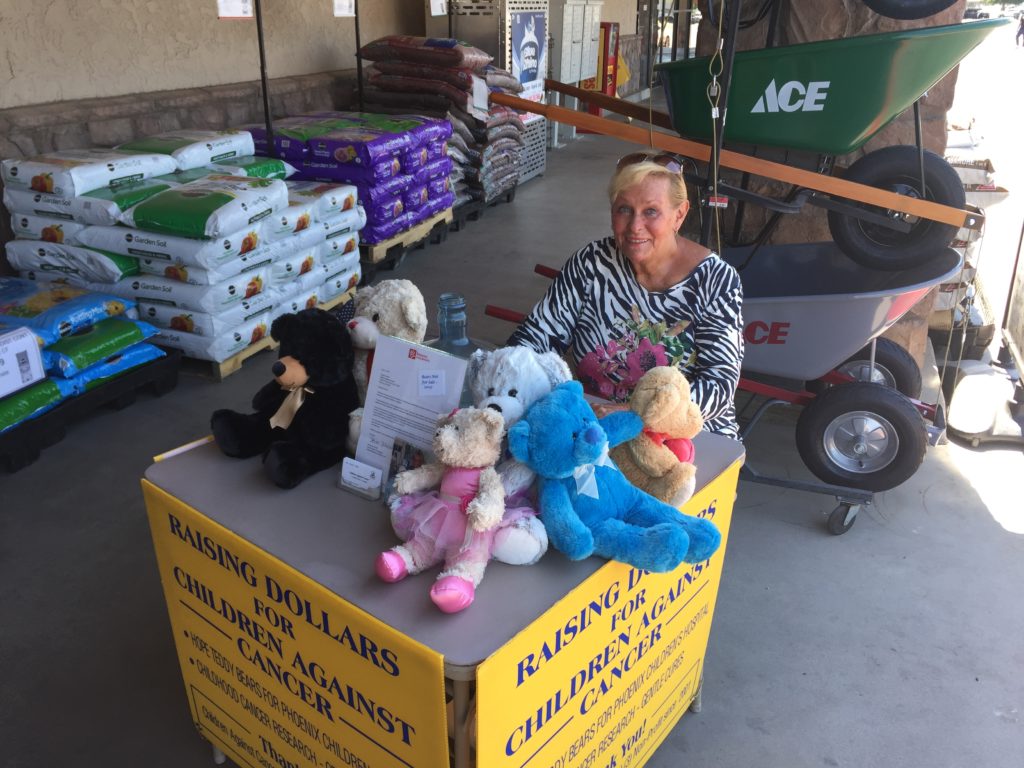 As the daytime temperature in Tempe and West Chandler continues its steady rise toward sweltering degrees, most residents dream of a dip in the pool or a cool California get-away.

On a sizzling afternoon in late June, the founder of Children Against Cancer sits at a folding card table outside a hardware store in Tempe, surrounded by teddy bears, asking for donations to her small non-profit organization. She’s a grandmotherly type, an average American who has taken it upon herself to make a difference in the lives of desperately ill children.

Olson visits nearly two dozen hardware stores around the Valley each month in her quest to raise money to purchase teddy bears for pint-sized cancer patients at Center for Cancer and Blood Disorders at Phoenix Children’s Hospital. On display between the teddies of various hues, including one dressed like a ballerina, is a letter from the cancer center thanking Olson for her hard work.

“Your thoughtful gift will help these brave children and their families in so many ways,” the letter states in part. A photo of Olson presenting a teddy bear to a little girl stands in front of the donation jar. The child’s mother told Olson her daughter had been suffering from bad dreams that she was going to die.

“She started sleeping with the teddy bear next to her head and the mom told me later that the bad dreams stopped,” Olson says. She’s been bringing the whimsical stuffed bears to children at the hospital and other cancer centers since 2001. “They call me the teddy bear lady,” she laughs, but it’s a title she’s clearly proud to hold. She’s given out more than 15,000 bears since she started.

Her website, childrenagainstcancer.org, tells the story of Olson’s organization and explains one of the reasons she’s devoted to her work: “Our teddy bears do wonders to comfort and encourage very sick girls and boys who struggle with every breath they take just to survive another day. And these kids are scared!”

Outside the hardware store, a steady trickle of shoppers wanders past Olson’s table. A few stuff bills through the hole in the top of the donation jar. “Thank you, dear,” Olson tells one donor. “God bless you,” the man calls over his shoulder as he strolls away, keys in hand.

“I’m asking everyone to donate whatever they can so I can take the bears to the cancer center like I do every month trying to cheer up sick girls and boys,” Olson says, adding that she buys the teddy bears herself using the donations she gathers. Most people give about $5, she says.

In light of the high temperatures, even in the shade, the hardware store owner invited Olson to move her table inside where it’s markedly cooler. Olson demurs. “People get busy inside the store—they’re distracted,” Olson says, her suntanned face a testament to her devotion to helping sick children despite of her own personal discomfort in doing so.

This only begs the question: Why does she do it? And what does she stand to gain?

“My mother died in my arms of cancer,” Olson says simply. She did some research and found out cancer is one of the leading causes of death in children. That discovery prompted her to take action, one woman and an army of bears against a formidable opponent that robs children of health and breaks their parents’ hearts. So far, at least on a summer’s day in this little corner of the world, the bears appear to be gaining ground.

According to the National Cancer Institute, an estimated 15,270 children and adolescents ages 0 to 19 were diagnosed with cancer and 1,790 died of the disease in 2017. More than 420,000 Americans are survivors of pediatric cancers. Some of them, no doubt, have a special teddy bear tucked, a poignant reminder of their brush with death.

To find out more about Olson’s organization or to make a donation, visit ChildrenAgainstCancer.org.

Joyce Coronel
Joyce Coronel has been interviewing and writing stories since she was 12, and she’s got the scrapbooks to prove it. The mother of five grown sons and native of Arizona is passionate about local news and has been involved in media since 2002, coming aboard at Wrangler News in 2015. Joyce believes strongly that newspapers are a lifeline to an informed public and a means by which neighbors can build a sense of community—vitally important in today’s complex world.
Previous articleEx-McClintock athlete scores again as top goalkeeper in world finals
Next articleBariatric surgery: New enthusiasm, new energy, new life