If you listen closely, you hear Jimmy Buffet. And Bob Marley. And even Chicago.

The common musical denominator is a soulful, fun, party ambience.

“We play country music,” said Mike Tempo, Bonedaddys’ founder and percussionist. “But it’s from another country.”

Fasten your seat belts. The Bonedaddys return to Tempe May 18 for a 7:30 p.m. show presented by Lakeshore Music Inc., at Tempe Center for the Arts.

Together since 1984, with a few moving chairs and one hiatus along the way, they say their songs are “designed to move butts of all persuasions” as they serve up a wild mix onstage that continues to enhance their reputation as the merry pranksters of the international beat.

When last we heard from them in these parts, the Bonedaddys were playing to a sellout crowd at the Mesa Amphitheatre. 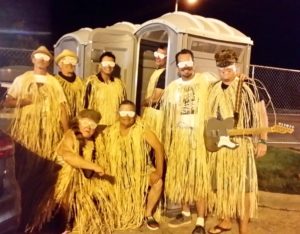 “They created a cult following in Phoenix after a series of small shows in Tempe and one big blowout concert at the Mesa Amphitheatre,” said Woody Wilson, president and executive producer of Tempe-based Lakeshore Music, Inc. “That Mesa show, which I produced, was my first large-venue concert.

“I thought it was time to bring the Bonedaddys back to the Valley for a reunion. Their music has endured for more than 35 years in clubs and festivals throughout southern California, and it’s still as fresh and creative as is was in 1989.” Tempo acknowledges that the years since have ticked away rapidly.

“The Bonedaddys are gonna be tickled to be back in Tempe,” he said from his home in southern California. “It’s been way too long since we’ve played in The Valley of The Sun. We’ve prepared a set that includes new as well as cherished songs from earlier in our 35-year history.

“Tempe has long been an important part of The Bonedaddys’ DNA and we are very excited for the opportunity to return. We certainly intend to rock the house.”

With the Bonedaddys, you get rich instrumentation with horns, harmony vocals and whimsical lyrics. They’re not afraid to mix in jaw harp, washboard, banjo and harmonica. They’ll give you an optimistic view of life in spite of troubles. Or spin a funny redneck anthem, or a hillbilly love song.

After dropping their sixth album, waterslide, in 2007, they came out of hibernation with 2014’s Big Thunder and followed a year later with A-Koo-De-A!

Undergroundmine.com wrote that the Bonedaddys produce “sensuality evoking the passionate swagger of Santana in addition to the rhythmic art funk of Gnarls Barkley. No barnyard fiesta could withstand this infectious delight.”

“They could be called the hardest working band in … in … but in what genre? Rock? World Beat? Fusion? Latin? Blues?” reviewer Darryl Gregory wrote for IndieMusic.com. “All those styles plus a few they made up. The Bonedaddys definitely know how to get a person up and out of their chair dancing.”