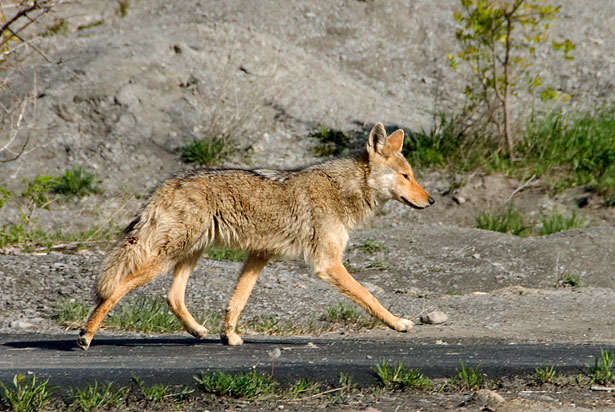 Editor’s note: You may be wondering how a story originating in Florida applies to us in this part of the world, but venture out almost anywhere in the wilds of Tempe or West Chandler and it’s not unlikely that one day you could encounter a similar situation. Just don’t say we didn’t warn you.

Last month my brother beat a coyote to death with a rubber mallet. It happened something like this:

My brother lives in Florida. After a long career as an airline pilot, he retired to the Orlando area with his wife a few years ago, mostly to be close to their daughter.

But it happens that his wife’s sister and her boyfriend live nearby as well.

So one day last month my brother was over at his sister-in-law’s house, working on a remodeling project in the kitchen with the boyfriend. His sister- in-law was in the yard, doing some gardening. Out of the corner of her eye, she noticed a large animal wandering past.

She looked over in time to see that it was a coyote, out in broad daylight, and that it was charging toward her. It lunged at her, and sank its fangs into her leg.

She screamed, naturally enough, and my brother and the boyfriend rushed out of the kitchen. The boyfriend grabbed the coyote and tried to pull it off her, but, perhaps fortunately for him, it refused to release her leg. My brother got a rubber mallet from his toolbox and beat the poor creature’s brains in.

Needless to say, the sister-in-law has been made to undergo a lengthy and painful course of rabies shots, though my brother assures us that she’s tough enough for them.

He’s seen her, he says, go straight from a chemotherapy session to babysit her grandkids.

These are the broad strokes of the story, related to me over the phone in unassuming, maybe slightly reluctant terms by my brother.

I didn’t press him for too many details; he was making jokes about it—saying that his new Native American name was Kills-With-A-Rubber-Mallet, for instance—but I could tell that the incident had shaken this soft-spoken, gentle-natured man.

Here’s a thing about my brother: Like me, like several people in our family, he’s a little on the OCD side.

In his case this manifests, partly, as germaphobia. Out of any number of, to use Arlo Guthrie’s phrase, “implements of destruction” that were near to hand, his choice of the rubber mallet to dispatch the coyote wasn’t random.

He picked it up, he told me, because he didn’t want blood to fly. He knew that you don’t have get bitten to be infected with rabies; simple exposure to bodily fluids can be enough.
Even though blood didn’t fly, the doctors considered ordering the shots for my brother and the boyfriend, though in the end they decided against it.

Here’s another thing about my brother:

He’s been my hero since I was child. He started earning his private pilot’s license while he was still in high school, though his ambition to be a commercial pilot seemed improbable because he wore glasses, which in those days was a disqualification. So for years he worked driving salt trucks, cement mixers, school buses.

He worked building houses with a contractor cousin. He was even a weekend mail carrier in our Pennsylvania town (that’s why I learned to drive in a jeep with right-hand steering).

Then deregulation allowed him to become an airline pilot after all, in his thirties and after he had gotten married.

Years later I mentioned to him how gratifying I found it that he had been able to achieve his dream, and he told me that it wasn’t as satisfying as he’d hoped.

He is, by his own account, a chronic worrywart. The weight of his responsibility for the lives of his passengers, his crew, even of people on the ground, had never been fully clear to him until he experienced it.

In the last few years of his career, he switched to a ground job, working in a simulator, re-certifying pilots for duty.

He hoped that this might relieve some of his worry, but no, it just extended it to the pilots he certified; their responsibilities becoming partly his.

“I don’t want a tombstone when I die,” he once told me, “but if I did, I’d want it to say ‘HE FINALLY STOPPED WORRYING.’”

“Are you sure that’s true?” I asked. “No,” he admitted. My brother was slightly acquainted with Chesley “Sully” Sullenberger, the pilot who landed US Airways Flight 1549 in the Hudson River after it collided with birds in January 2009, saving everybody aboard.

My brother told me that he’s taken off from that same runway, and reflected, not optimistically, about one’s options should an emergency landing be necessary in that area.

When I saw Clint Eastwood’s film Sully, it brought me to tears, not only because it was an inspirational story but because it made me think of my brother, fretting about the people who had placed their lives in his hands, worrying about how he would save them if he had too.

We all depend, probably far more often than we realize, on that particular brand of the kindness of strangers, and we can only hope they take that duty as seriously as my brother does.

So I’m writing this, even though I’m not sure I want my brother to read it, because I fear it might embarrass him.

I’m writing it not because I love my brother, though I very much do, but because I admire him.

He’s a quiet, self-deprecating kind of guy, but if you need somebody to land you safely in an airplane, or to kill the rabid coyote that’s attacking you, he’s that kind of guy, too.