Editor’s note – In light of recent international headlines, Wrangler News contributor Sammie Ann Wicks set out to learn more about one of the social-media platforms being used in our community.

If you’re an average citizen of today’s wireless world, you know the drill: Go online, where internet companies invite you to share, connect, network or reach out to family and friends. And, oh yes, they’d like you to sign up for their free services by filling out a simple application.

But this isn’t the kind of connecting we remember our own families doing as we were growing up. It’s not sitting with the neighbors next door and looking them in the eye while you share stories about your kids and theirs, the new postal carrier on the block, the Jones’s missing cat, the high school kid who lives down the street who drives too fast, too dangerously.

No, our online world today is what Marshall McLuhan so many years ago famously called mediatedconnecting. That is, something (or someone) stands between your connection and your intended respondent, who is also online, he or she mediatedby the same electronic tools.

So we begin to “connect” and encounter the communication of those we know are doing the same thing. It’s entertaining, clever, convenient…and to a growing number, worrisome.

So ubiquitous are these seemingly ever-present dispensers of “news” that even such municipalities as Chandler and Tempe have engaged with yet another, though still lesser-known but growing social media company, Nextdoor.

The San Francisco-connected company has, in fact, grown its presence locally with a considerable amount of input from the city of Chandler, which finds the company’s services useful to its communication needs.

Nextdoor’s popularity here may be due to its “next new thing” status, offering participants a chance to monitor real-time neighborhood activities and report those happenings back to other participants in the neighborhood.

Like those in Nextdoor’s claimed 100,000 neighborhoods across the country, Chandler’s Nextdoor members can “create private websites for their neighborhoods where they can ask questions, get to know one another, and exchange local advice and recommendations.”

Because of the possibility of real-time reporting of activities and events in the local neighborhood, municipalities like Chandler say such services can also help neighbors to monitor nefarious activities such as sexual predation, kidnappings and other activities they regard as suspicious.

“There are two ways we at the city use Nextdoor, and they’re both news-based. The first of these is the kind of news that is specific to a neighborhood, like perhaps a park remodel or other event in the neighborhood of interest to the people actually living there, where people who are directly affected might see it.”

“The second way we use Nextdoor is to disseminate news and information that is geographically wider,” says Baxter—“items of concern to people city-wide.”

Baxter states that, although numbers of local Nextdoor users compared to Facebook is smaller, around 21 percent of households in Tempe still make use of Nextdoor services, including 161 neighborhood self-started groups.

Privacy issues of concern to individual users are strictly a matter of choice, she declares.

“Nextdoor is much like any other social media outlet; you either use it and abide by their rules or you don’t use it,” she says.

“Individuals have the right to choose the venues that they’re comfortable using.”

Some observers, though, say they suspect the potential for a darker side to such social media sites in the area of personal privacy. They cite recent revelations that social media giant Facebook allowed Russian operatives, posing as Americans, to buy divisive ads and thus influence some 10 million Americans during the 2016 presidential campaign.

At the national level, data collection beyond the purely political is said to have become a massive marketing tool, burgeoning both in size and its ability to create accurate profiles of individuals, and thus target them with unsolicited ads for products they might buy. 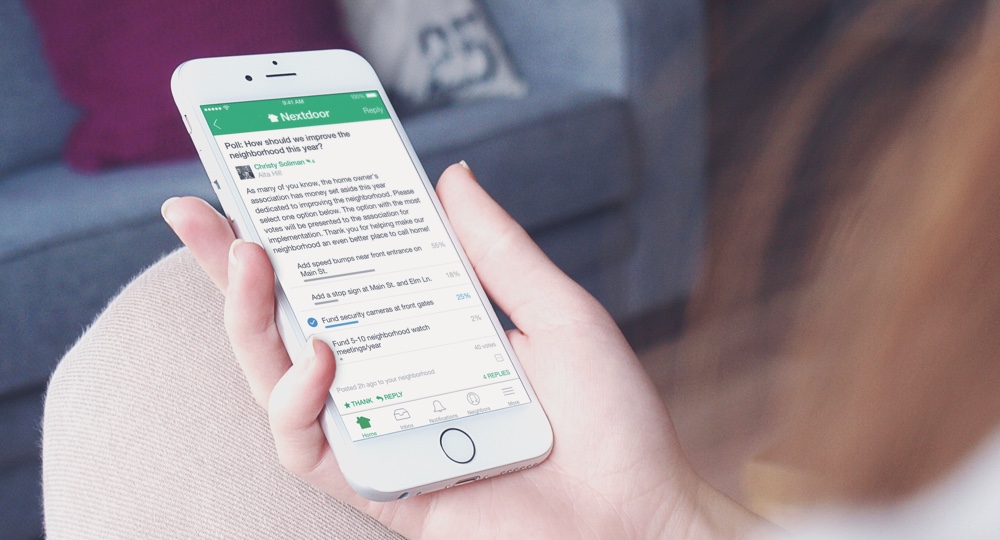 (Full disclosure: Wrangler News pays for a small number of promoted posts on its Facebook page to help expand readership of topics we consider to be of community-wide importance.)

On the everyday, local level, personal data collection by social media ventures is just as replete, and some say—in the area of personal security and privacy—just as dangerous.

Pundits posit that, if you’re not paying, you’re not a customer—you’re a marketing target. So social media companies require users to reveal information about themselves as a cost of membership: If you don’t provide the personal information, well, you can’t participate.

For instance, Nextdoor’s official Privacy Policy states that potential users of the site can become members if another Nextdoor member in their neighborhood invites them (if they supply their residence address) or “by providing…your name and street address and email address…[and] additional authenticating information that we request, such as credit card numbers, the last four digits of your Social Security number, and unique codes emailed to you, or your home or mobile phone number.”

Thus, users are allowed to use Nextdoor services by first submitting personal information about themselves to the company.

“We allow you to create a personal profile and submit information such as your phone number, photo, occupation, family members, biography, and personal interests,” says Nextdoor, adding however, “We may give you ways to hide some of this profile information, but your name and street address may be visible to your neighbors so long as you maintain your account.”

Once membership is granted, says Nextdoor, the company “automatically collects information about your visit to the company web site…including the browser you are using, the URLs you came from and go to, your operating system, your IP address, and usage and browsing habits.” This collected personal information, the company declares, is used “to…analyze trends, help target offers and other ads, track user movement…and gather broad demographic information.”

Users’ own personal computer equipment is also physically altered by company software, says Nextdoor, through the use of “cookies, small data files stored on your computer which include unique identifiers.”

Nextdoor says, however, that it allows users not to participate in cookie collection: “You can configure your browser to reject cookies,” says the company, “but doing so will prevent you from logging into our web site…[and]  Our systems are not configured to accept browsers’ ‘Do Not Track’ signals.”

Other personal information is used by Nextdoor for similar commercial purposes:

Nextdoor, as well as Nextdoor members living in your neighborhood, also will be told where you live:

“To start a neighborhood, we obtain public information about residences in the neighborhood,” Nextdoor says, “such as street addresses and property lot maps.” But your neighbors, they say, will have your information as well.

“Your neighbors may provide us with, and share with your other neighbors, information about you, (even if you are not a member),” the company declares, “such as your name, email address, street address, phone numbers, and other information typically found in our neighborhood directories.”

But even with the amount of sharing Nextdoor participates in with its third-party vendor partners, the company constrains users from sharing the same information.