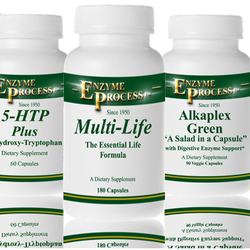 It’s the classic 20th-century American immigrant’s tale: young man, full of ambition and wanderlust, casts his eyes across the Atlantic, and resolves to make the Land of Opportunity his own.

The story starts in Wales, but after many a circuitous detour across the globe, ends in the city of Chandler, where the fruits of the young man’s labor ultimately come to rest.

“My father was Welsh, but because his own father was British military, he was born in India, where the family had been stationed,” says Steve Roderick, son of the founder of Chandler’s Enzyme Process nutritional and supplements company.

The junior Roderick has been involved as a principal in the company for 25 years, and took over its direction after his father’s death eight years ago.

“My father David’s life was full of constant change from the beginning—that was his way,” says Roderick. “He grew up in Wales, but when he turned 17, he left there, joined the (British) Navy, and served in Palestine for a couple of years. But eventually he left there, too.”

Next stop, says Roderick, involved his father jumping on a boat to Argentina, where the senior Roderick learned to speak Spanish language and become familiar with Argentinean culture.

“Eventually, he left Argentina and went back to England, stayed there another year, and then talked himself into a job as a bartender on the Queen Mary, headed for New York City,” Roderick continues.

With the Statue of Liberty at last looming before him, Roderick senior got off the Queen Mary and, emphasizing his recent experience, convinced a New York lounge owner to hire him as a bartender.

“This was pretty exciting stuff for my father, because the bar where he had his first job was in Manhattan, where all the actors and actresses hung out, which exposed him to a lot of well-known people,” Roderick notes.

Always being responsible and applying himself in every job he had, his father ultimately was approached by one of the lounge’s frequent patrons, recalled Roderick.

“This guy had noticed my father, and one day he went up to him and said, ‘I love your accent, you have light hair, you have blue eyes, and I want you to go to work selling for me,” Roderick recounts. “This guy was one of the upper management of Royal Lee’s Standard Process Co. of that time.”

(Standard Process founder Royal Lee, in the early decades of the 20th century, became known by some as “The Father of Natural Vitamins.”)

So they agreed my dad would sell during the day, and continue being a bartender at night,” says Roderick. “And my father insisted it be commission-only–he wanted to make some money.”

With time, Roderick says his father methodically built up his sales territory throughout New York State, New Jersey, and Connecticut, going from his initial commission check of $172 to commissions that eventually ranged from $25,000 to $37,000, a sales coup for that time. His secret?

“He started visiting practitioners who at the time were called Applied Kinesiologists, and then later, he approached chiropractors—which was smart, because back then, there were a lot of doctors prescribing nutritional supplements,” Roderick explains.

He goes on to say his father’s success not only was due to the type of client he focused on: he also utilized an unswerving sales methodology, based on good personal conduct, integrity and taking care of the client.

“My father never cursed, and he never said anything bad about anybody,” Roderick continues. “He always told me, ‘When you speak to someone, leave them with only one thing—not everything there is to know about the product—because they won’t remember it.’” He adds his father always emphasized good grooming and personal presentation.

“For my father, appearance was everything. He would always ask, ‘Are my shoes shined?’ He went out the door looking great,” Roderick says.

Roderick believes his father’s greater success was due in large part to his specialized service to his clients, saying, “He stressed to me that, if you show people that you care about them, they will call you, and he was sincere about that.”

Roderick says he was constantly mentored by his father, not only about life, but about how to go about business properly.

“As a child he would take me into Manhattan with him, and I would sit in the waiting room so that I could get a feel for what he did.

“There was one time when I was watching his dealings with the famous Doctor Atkins. So I grew up in it.” Roderick adds that, while he was interested in the supplements industry, he eventually wanted to explore his own path.

“For a time, I went off on my own– with my father’s blessing–to learn more about the modern manufacturing end of nutritional supplements, and I worked in California for a company called Enzyme Process.” That company, says Roderick, eventually provided an entree for the Roderick family to become a major player in their industry.

“My father at that point had worked himself into a position where he could buy the company,” says Roderick, “and that was our start.” (The senior Roderick bought the company in 1988, establishing it in Chandler.)

“At first, we were only renting our building,” Roderick says, “and we stayed there for 15 years. Now we own our own state-of-the-art facility.”

Running a successful business for nearly 25 years, Enzyme Process’s son seems to follow the father’s wise and business-savvy vision for what good business should be about.

Now, Enzyme Process operates with 15 long- term employees and with the contributions of his Serbian wife Gorica’s nephew, Alex Jakovljevic, who contributes to operations and handles the company’s IT needs.

Vitally active all his life until his later years, Roderick says his father pushed on until a few years ago.

“It was after my father underwent open heart surgery that he started to slow down,” Roderick remembers. “I had put a couch in an office for him at the company, which he used a lot in the beginning, but eventually, he stopped coming. It was a sad moment.

“We were thankful he had an easy passing, but it was still hard to lose him, in part because of his stature as such an exceptional human being,” Roderick reminisces, reflecting on the 20th century’s titans of industry exemplified by his father:

“They don’t make them like that anymore–they were just a different breed–and they are missed.”

Enzyme Process International operates out of its 25,000-square-foot facility on 56th Street in West Chandler, creating natural supplements in its GMP (Good Manufacturing Practices) Certified Laboratory under the direction of chemist Angel Gutierrez. The laboratory is humidity and temperature controlled, and is registered with and inspected by the Federal Drug Administration.

The company also offers a line of private label products for sale to other businesses and doctors’ offices, manufactured and packaged to order.

Gutierrez says one of Enzyme Processes’s specialty products, Olive Leaf Plus, is a natural immune booster, and is especially popular during the flu season.