“Fusion” has been a favorite term in the restaurant business in recent years. As the word implies, it’s the idea of the culinary traditions or methods of more than one culture being merged to create an entirely new cuisine.

Thus we’ve had Pacific Rim and California Cuisine and Mexican Sushi and other such innovations, often with wonderful results.

If Persian-Chilean Fusion someday becomes all the rage, it may just trace its roots back to Mingle + Graze, the pleasant new cheese bar and kitchen housed in a ‘30s-era plaza in downtown Chandler.

The project of husband-and-wife team Cristobal Alarcon, of Chilean extraction, and Mahfam Moeeni-Alarcon, of Persian descent, opened less than a month ago. 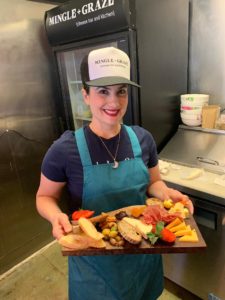 “We haven’t done a huge announcement or anything,” says Mahfam. “We just opened the doors to see what would happen. We’re a cheese bar and kitchen, so you can order a cheese and charcuterie board, and we also have sandwiches. We make our own tapenade. We’re vegan friendly as well; all of our soups are vegan, and we have a vegan board.”

Said soups include a red lentil with coconut milk that’s delicious whether you’re vegan or not. Said sandwiches include the not-so-vegan “Maffyletta,” named after its designer Mahfam and featuring black forest ham, motadella, salami, gouda and a “Persian Olove tapenade,” among other goodies, skillfully deployed on a wonderful soft bun from Mediterra Bakehouse in Coolidge.

“My husband and I both went to culinary school,” explains Mahfam. A Tucson native who grew up in Arkansas and went to school at Arkansas State, she moved into the foodie biz here in the Valley with her husband, Oberlin grad Alarcon. 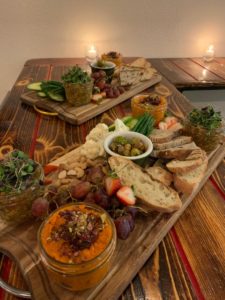 “We have a combined thirty years’ experience in the business,” Mahfam notes proudly. “He wanted to go the management route, so he worked in management at Postino, Snooze, Barrio Queen, Spotted Donkey. I wanted to work on the retail side.”

Accordingly Mahfam worked for Whole Foods, in charge of craft beer and wine pairing dinners, and as a wine buyer. At the same time, “I was making marinated olives and selling them at Phoenix Public Market.”

“We worked as servers, bartenders,” she recalls.

“We do catering, too. We think it’s really important to be familiar with every part of the business, not just the kitchen”

So far, Mingle + Graze seems to have both the kitchen and the dining room tastily under control.