Ninety-six new beds and an anticipated 200 new jobs are forecast at Chandler Regional Medical Center as part of a $190- million-plus expansion initiative.

The project was announced by Dignity Health/CRMC president and CEO Mark Slyter, who said the plans include renovation to the current facilities along with a new parking garage.

The expansion will bring the hospital’s capacity to 494 beds, according to Slyter.

A similar project was completed five years ago, including a new patient tower and addition of a Level I trauma center. 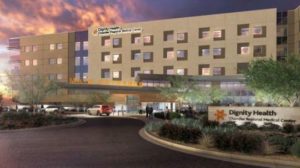 Construction of the planned 200,000-square- foot tower will start this summer, with occupancy expected early in 2021.

Features of the new construction will include addition of a new main entrance on the first floor; a registration area and pre-op-post anesthesia unit, accompanied by around-the-clock patient rooms on the second floor; 36 intensive care rooms on the third floor; the same number of patient rooms designed for standard care on the fourth floor; and uncompleted-for-now space that can be used for future growth on the fifth floor.

A basement will provide space for a new hospital pharmacy, materials management facility and loading dock.

Along with the building construction, the project will include a five-story parking garage containing just under 250 spaces.

So far, no remodeling is yet scheduled for the hospital’s Emergency Department, major expansion of which was included in a 2014 project.