Letter writing not a lost art, thanks to this 90-year-old

Story and photos by Robyn Martinez

Letter writing may seem like a lost art to some. But students in the Tempe Elementary School District are reviving it, thanks to the program Pen Pals for Seniors, initiated last year by Tempe Elementary Visual Communication Specialist Amy Garza.

What started as a way of communicating with Garza’s grandmother over the years has blossomed into a program that has been steadily growing, recently having motivated 110 Tempe Elementary students and seniors at three different care centers to exchange letters.

“My grandmother is in her 90s and always loved writing letters and getting mail,” said Garza. “We have always written back and forth, but now that she is older she can’t write back.”

Garza’s inspiration came to her one day while reading the paper. “After seeing a news story about a woman who started a pen pals program, I immediately connected with the idea and was inspired to carry on my grandmother’s legacy through a similar program for our students.”

In her time outside of work, Garza set up a calendar system to organize the 14-day pick-up and drop-off cycle. Now, using the calendar alerts, one of the participants gets a letter, writes a response and returns it within two weeks. 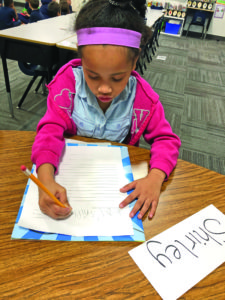 “I love the feeling I get when I deliver the letters,” Garza said. “Sometimes I take a peek at them, and I have noticed that even though there may be 70 or 80 years difference between the pair of writers, they have the same interests and things they like—favorite colors, foods and common activities. They are more alike than they are different.”

Garza says she has been told that the program is making a difference for all involved parties. Some seniors are in memory care, and the staff caring for them is noticing that it helps them to write letters and remember information.

“Many of our seniors don’t get much interaction with children, and many are lonely. To know they are receiving a letter from their pen pal really gives them something to look forward to,” said Jennie Mason, activity director at Friendship Village of Tempe.

Through letter writing, students are working on improving their handwriting, along with their verbal skills and how they speak to others. In addition to working on their writing ability, students are also learning empathy because they really show care and interest in the pen pal’s comments, likes and dislikes.

And, at the same time, learning that forming relationships can take place in the most unexpected ways. Here is what some students in Nicole Roberts’ first-grade class at Arredondo Elementary shared about the program:

“I like that we get mail and they write to us.” – Taydem “They are always happy and nice, and like what we tell them.” – Gianna

“They ask us cool questions, and tell us cool things about their life.” – Brandon

One senior participating in the program, Joanne Jordan, smiled when she said that her pen pal asked her to write a letter in her own hand instead of typing it on the computer, “so she could see her beautiful handwriting.”

Jordan told her daughter in Seattle, who is a teacher, about the program, and the daughter is now considering implementing the program with her own students. 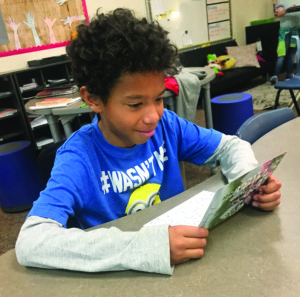 WIn this technological world of emails, texting and social media, Garza hoped the Pen Pals for Seniors program would be a simple way to keep the dying art of traditional letter writing alive.

There is something exciting about receiving a letter in the mail, and she wanted the pen pals to experience that feeling of eager anticipation.

“I enjoy hearing from my pen pal. It’s so fun hearing the things they say,” said senior Pen Pal Vanny McCoy. “When you are as old as I am, they bring me back to times when I was that young…and I recently discovered that we both love fried chicken!”

Garza was not expecting the program to grow as it has but is thankful for the impact it has been having. Her goal at the end of the school year is for the pen pals to meet in person to see each other face to face.

The pen pals at Arredondo are already planning to invite their pen pal seniors to the school’s Valentines season friendship musical performance.

“You can make a difference…just by taking a few minutes out of your day to simply talk to someone,” said Garza. “Something you may not think is a big deal could be a big deal for someone else.

“Everyone needs a friend and someone to talk to, tell stories and to share life with. Be that (friend) for someone, and you may find an amazing relationship you weren’t expecting.”

Wrangler News Staff
Previous articleFirst person: Making our community better, one unlocked door at a time
Next articleAt this celebratory time of year, can we unplug our devices for a moment?