Wise men came in the midst of darkness to render him homage.

That’s one of the many images you see popping up in dazzling holiday light displays around town as Christmas approaches.

At this time of year when editors think back over the most compelling photos of the past 12 months, there’s another image—a heartbreaking one—that comes to my mind, one that stunned the world when it was first published by the New York Times in 1993.  The photo catapulted a young photographer to fame, if only briefly.

Kevin Carter won the Pulitzer Prize in 1993 for the iconic portrayal of an emaciated young Sudanese child who had collapsed on the ground from starvation. A vulture lurked nearby, awaiting, it seemed, the child’s demise.

And though it first came to light 25 years ago, it’s an image that continues to spark strong emotion. Although some might say Carter, a gifted photographer, had reached the pinnacle of his career by winning the Pulitzer, he never got over what he had witnessed and the troubling questions that dogged him. 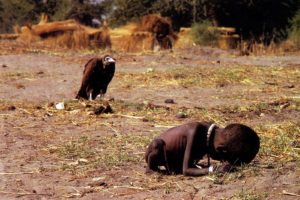 People wanted to know: What did you do for the child? What became of this frail human being? At the time, Carter said he shooed the vulture away but then had to hurry off to catch a plane. One person accused him of being a vulture himself, having profited from a tragedy he supposedly did nothing to avert. By his own admission, Carter stood near the child for about 20 minutes, waiting for the perfect shot.

Three months later, at age 33, this talented photographer took his own life. But it didn’t have to end that way.

A few days ago, I saw a twenty-something idealist — someone who was maybe a preschooler when the Sudanese famine struck — post a rant about Carter’s famous photo and his failure to rescue the starving child. Carter would be alive today, this person opined, if only he had taken the time to carry the child to a feeding station. And the rest of us are vultures, too, when we refuse to take action to remedy injustice.

Well, I suppose that might be true. But this is where having a few more birthday candles on the cake can change everything. From my vantage point (I’m being courted by AARP these days), my gut reaction is that what Carter was lacking was a wise mentor or colleague. If only he’d had someone in his life who was a bit older, a fellow journalist who had covered atrocities and wars and famines, someone who knew what every journalist knows: Our job is to get in there, get the information and tell the story to our readers in the most compelling way possible—on deadline. By capturing that powerful image, Carter helped raise awareness about the starving masses who had no one to defend them.

In fact, Carter had been invitedto Sudan to take photos to bring attention to the plight of the thousands of starving children. So he was doing his job, using his gifts to shed light on the situation and help raise money to save people’s lives. That’s what a judicious mentor would say, and he would say it as the two of them sat down, face-to-face, and talked it out over a beer or over coffee.

A mentor reminds us of the truth, helping us put things in perspective.

This person challenges us to imagine a similar scenario and then draw a comparison. Here’s what I would have told Carter: “Think of it this way, Kevin. You don’t want an emergency room doc bursting into tears when a child who’s been beaten up and abused is brought to the hospital by paramedics. The doctor will not be effective if she gets emotional. She may cry and scream later on. She may be moved to make a large donation to a domestic violence shelter when her shift ends. She may even decide to adopt an abused child. But in the E.R., she’s all business. And by being all business, she’s effective.

“And yes, occasionally—it’s happened to me, in fact—we take off our journalist’s hat for a moment and feel the humanity of what is going on. We use that emotion to inspire the best possible work that will do the story justice. Later on, after our job is done, we make that donation or join that cause.

“And, let’s be honest, Kevin. You could have carried that child to the feeding station, but the authorities told you going in that you weren’t allowed to touch anyone, that you could spread disease.”

An older, more-experienced mentor could have told Carter: “OK, you feel guilty. Fine. Now what are you going to doabout it?” Our friends and mentors—wise men, if you will—pierce the darkness and help us see our mistakes and foibles for what they are—evidence of our human weakness.

They show us that guilt and mistakes can motivate us to face the truth about ourselves or our situations. A word of sage counsel guides us to hope and helps us to realize that there’s always, alwaysa way back.

The fact that Carter saw no way out tells me that he must have felt very alone and afraid. His suicide note alluded to money problems. Was there no one to help him gain perspective? No wise mentor to guide him through his dark night of the soul? To help his realize life means more than money? Such a one could have saved his life. Who knows what great things he would have gone on to do with the gift of his life?

Do you have a wise friend in your life, someone you can turn to? Are you able to help guide those less experienced than you are? We here at Wrangler News are committed to building community one relationship at a time. Don and I have guided many a cub reporter along the path to greater adventures. We’ve had the privilege of similarly nurturing gifted photographers like Billy Hardiman and Alex J. Walker through the years, young men we know are headed for even greater success as the years go by.

What about you? How are you helping to nurture hope in our community? Your word of wise counsel and encouragement, your willingness to listen to someone’s pain, could save a life. Let’s work together to build a stronger community, one relationship at a time.