Hard work and achievement, not gender, pave the way for females in police careers

Some say the hardest job is being a mother. Others argue that our city’s police officers and their spouses face equally difficult undertakings . But what if you’re all three? For some of Chandler’s finest, it’s just another part of life.

During a Women In Leadership luncheon hosted by the Chandler Chamber of Commerce, attendees heard from four women who choose to serve their city in law enforcement while also maintaining a family at home and much more. The panel included Sgt. Donna Reno, Lt. Melissa Deanda, Sgt. Sara Rozema and Rita Dyas, who is Forensic Services Manager for Chandler PD.

Although their resumes make easy reference to the women’s accomplishments, each confidently admits that their actions are simply part of their job.

“Respect is earned, it’s not just given,” said Deanda, the first female to obtain the rank of lieutenant in the Chandler PD. “We earn respect on a daily basis by our hard work and dedication, alongside not only the other women that I work with, but the men that I work with as well.”

A crystal-clear theme from the panel: These women earned their reputation in law enforcement purely based on their merit, selfless character and above-average performance, not on gender.

Although the world of law enforcement still remains primarily male-dominant, Chandler PD boasts a 14 percent employment of female officers in its ranks, which is 2 percent higher than the national average.

Referring to that figure, Chandler Police Chief Sean Duggan expressed his immense gratitude for officers such as the women on the Chandler Chamber-sponsored panel discussion, and is confident in the leadership they bring to the table for the city of Chandler. 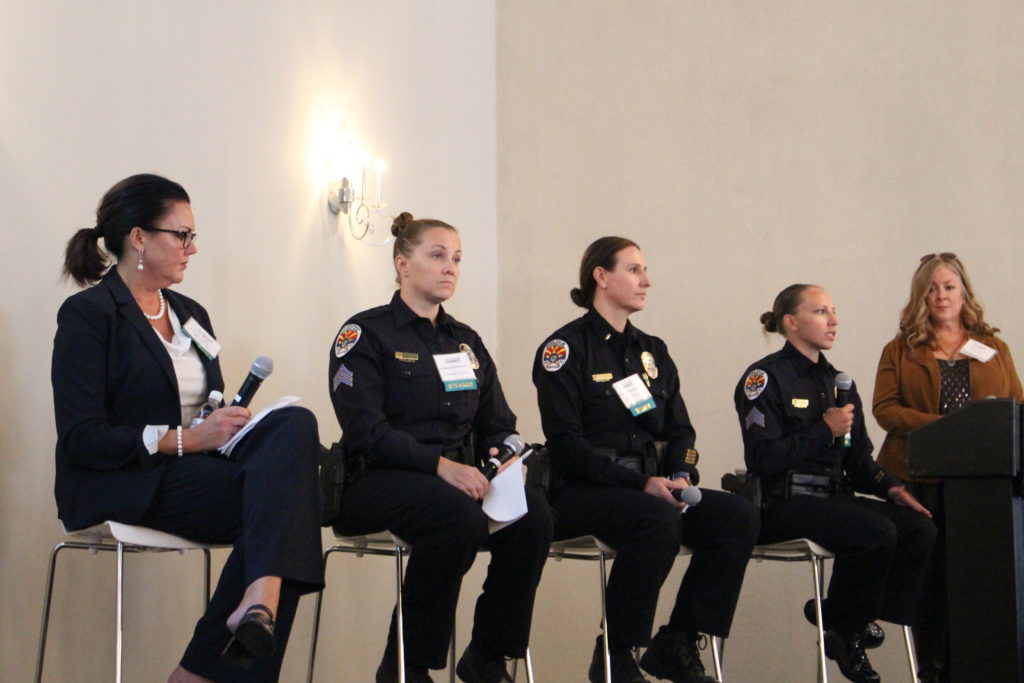 Said Duggan: “We create a culture that recognizes and appreciates hard work and accomplishments, no matter who you are or what you look like,” noting that everyone in this line of work experiences the same training no matter their gender, which enables them to handle the fear and stress they encounter on the job.

Despite the fear they face, however, officers revert back to their training in order to help them accomplish their mission in dire circumstances, she said.

But why do they choose to do it?

“Well, I have bills to pay,” chuckled Rita Dyas.

Her real reason: simply because she loves what she does. For 27 years, Dyas has worked in forensics and says she has loved the job every step of the way.

This particular side of law enforcement, which is usually behind-the-scenes, is a primarily female dominated world, according to Dyas, and the lab at Chandler PD is filled entirely by women.

For the other women on the panel, a mutual desire for self accomplishment and community involvement led to their induction onto the force, and each of them love what they do.

According to the panel, for anyone interested in pursuing a career in law enforcement, research the requirements and qualifications first. Once you’ve obtained some life experience and are ready for the challenge, then “take the leap of faith!”