Zipping, zooming and zig-zagging through the streets of Tempe, a new flock of Birds has descended on our city—only these have wheels instead of wings.

If you’ve never taken one of these electric scooters by Santa Monica-based Bird Services for a spin, then your opinion on the matter is likely indifferent. But if you’ve had a jaunt on one, then you know exactly why an increasing number of people seem to be swooping onto the craze.

Companies such as Bird, Lime and Razor (just to name a few), have placed hundreds of these speedy scooters in cities all across America, and now they’ve landed right here in our town.

Love them? Hate them? Don’t even know what to think about them? You aren’t the only one. This new class of transportation has become one of the most popular trends in America, and it’s still growing.

From my joy-rides on the boardwalk in Pacific Beach to navigating the national monuments in D.C., I can tell you that this brand of scooter-induced amusement doesn’t fade easily—unless, of course, you’re the one who’s dodging the thrill- and convenience-seekers using them.

The resulting rider-pedestrian rivalry seems to be one that will perhaps never reach a settlement, and the influx of rushed travelers increases this tension greatly.

Much like the Ofo or Lime bikes (which seem to have virtually disappeared), these two-wheeled speedsters are connected to a smart phone application, which is required to scan each scooter’s bar coding and pay for each trip.

Once the app unlocks the scooter, the rider can hop on and zoom to his or her next destination. Then, when the ride is completed, the app gets reopened and the scooter automatically relocks, calculating the time spent on board and determining the final amount that will be charged to the user’s credit card. It also prevents the scooter from being moved until it is unlocked again.

Every evening, collectors round up each device and recharge the batteries, then place them back in locations across town to be ready for the next morning’s glut of riders. 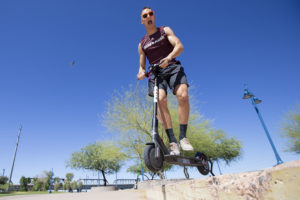 Despite what apparently observers say can be occasional careless behavior exhibited by some riders, each scooter company adamantly instructs app users to wear a helmet, be mindful of pedestrians and follow rules of the road.

How did the popularity of these wingless creatures seem to simply arrive out of the blue?  It was the brainchild of a former Lyft and Uber exec who apparently thought zipping around town on an electric scooter would not only get people where they wanted to go but replace their boredom with a bit of hilarious absurdity.

Some of those converts evidently even use them as a primary method of transportation to and from work or school. 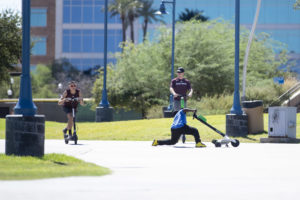 Love it or hate it, this may well be just one more step toward the future of transportation, and the way new businesses thrive in America.

According to a few ‘80s movies, we were supposed to have flying cars several years ago. So give these scooters a chance— maybe we’re finally on the right track.

Noah Kutz
Previous articleSurvivor’s advice: When life throws you a curve, get on your Harley and ride
Next articleTeacher’s passion: Lifting awareness among families battling cancer in kids