Survivor’s advice: When life throws you a curve, get on your Harley and ride

If you haven’t twisted down hard on the throttle and felt the punch a big motorbike can deliver, you might not understand Greg Venneberg’s crazy passion for two-wheeled travel. But his reason for riding will still inspire you.

“No matter what problems I’ve had to face in this life, just jumping on a bike and riding to wherever it took me always helped me solve them,” Venneberg says. The local Harley enthusiast says riding out on the open road has been his solace on more than one occasion.

“When the world throws too much at you,” he muses, “you can just go for a long, long ride and watch the sun come up.”

It was Venneberg’s philosophical nature, in tandem with his treasured bike, that first saw him through one of his life’s major difficulties.

“I helped my wife all through a terminal illness,” he recalls, lowering his voice almost to a whisper.

“She’d had polio when she was young, and was in a wheelchair for years anyway,” Venneberg remembers, “and we handled that. But her getting cancer just blew the lid off.”

Venneberg says he cared for his wheelchair-bound wife for 15 years after her cancer diagnosis, struggling through to the end, but learning life lessons in the process. “A long and terminal illness takes its toll on the caregiver as much as the victim,” Venneberg reflects. “But now, I know how to talk better to guys I ride with who are cancer survivors, and they’re still fighting, still getting up on the bike.”

It was the loss of his wife that first led Venneberg to use his motorcycle to begin to get over his grief.

“When my wife died in 2014, I just kept standing there and standing there, and finally, I said to myself, ‘You know what? I’ve never ridden to Key West, and that’s exactly where I’m going right now.’ And I got on the bike and didn’t look up again ’til I got there.” 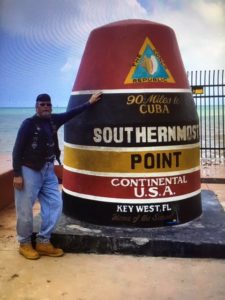 Since then, the veteran rider says he’s taken his 1998 Harley Electra to 48 states, and logged well over a half-million miles, all the while forming long-standing friendships with fellow riders who also have learned to meet their life challenges while riding.

He quickly asserts that, whatever the association in the public mind, the majority of his fellow riders are responsible citizens and consummately law-abiding.

“Those crazy guys in the likes of movies like ‘The Wild Hogs’ are just a bunch of Hollywood hoakiness,” he asserts. “We call that type ‘The 1 Percent’ . . . because it’s only 1 percent–if that–that breaks the law and causes all the trouble.”

Earning an associate’s degree in criminal justice from Garden City, Kansas Community College, Venneberg pursued a career first as an MP in the U.S. Army stationed in El Paso, and then went on to serve as a police officer with both the El Paso Police Department and the El Paso County Sheriff’s Department.

On retirement, he operated his own local handyman business for over 25 years. But with the work day over, most of the remainder of his time was spent riding.

For Venneberg, part of the joy of motorcyling is not only the exhilaration of controlling a powerful machine— it’s the almost primal connection to the natural world the experience entails.

“Riding a bike is so much more sensual, in terms of your senses, than riding in a car,” he says, “because you feel the rain, the dust, on your face, you have the sky over you, you see and hear the other natural creatures.

“There’s no better way to see the country.”

After the long crisis period helping his ill wife, Venneberg says his life now is “less complicated,” but adds he deeply misses aspects of his younger days.

“I still remember back to simpler times, when I was a kid in a small town in rural Kansas called Syracuse,” he says.

“My dad was an engineer and installed and maintained a natural gas compressor station there. Most of our neighbors were farmers . . . Wheat everywhere . . . wheat being grown, cut, and delivered. Everybody there was like one big family, and it was a peaceful life.

“So I remember the old days and wish for them,” Venneberg opines, his voice softening again.

“You can probably remember, too—those years when neighbors talked to each other, when a hamburger didn’t come wrapped in styrofoam and cost $15. That’s what I miss.”

And if problems do arise in his life again? Venneberg has a solution.

“I’ll just get on the bike and ride.”