When Dr. A. J. Chandler settled in the Arizona Territory in 1891, he couldn’t have known that one day in the future, the city named for him would host a gathering of African-born clergy.

Chandler, one of the fastest growing cities in the U.S., reflects the advance of globalization as more and more residents hail from places like China, Iran, Venezuela, Ireland and Africa. The smorgasbord of cultures lends an international flavor to an area that not so many years ago was chiefly known for cotton farms and ostriches.

On the heels of the recent debut of an eatery in South Tempe featuring West African cuisine, the African Conference of Catholic Clergy and Religious in the United States held its 19th annual conference in Chandler.

Attended by 43 priests, three deacons and 16 nuns—all natives of Africa—the event was an opportunity for participants to support each other in their ministry here in the U.S.

The Rev. Robert Aliunzi, pastor of St. Andrew the Apostle Catholic Church, welcomed the visitors with a nod to the ferocious desert temperatures endemic to August:

“I am so humbled that you chose to come and hold this very important conference here in our city, moreover at a time we are enjoying the best of our summer weather of three digits.”

Aliunzi also acknowledged the need for a regular gathering of African-born missionaries. In years past, African clergy serving in Arizona expressed frustrations arising from the “cultural and social challenges they were facing in their ministry in this cross-cultural, multicultural and supra-cultural fast-paced dynamics of our society.”

From unfamiliar food to linguistic hurdles and loneliness, for many African missionaries, serving in a foreign land was a steep challenge.

“Many times, many of us did not have the needed support system to cope up with these challenges,” Aliunzi said. In 2011, they formed an organized group of African clergy serving in Arizona which then linked arms with the national organization of ACCCRUS.

Nancy Welton has known Aliunzi since he first came to Arizona 14 years ago. She said at first, the congregation at her church struggled understanding the accents of the African-born priests. 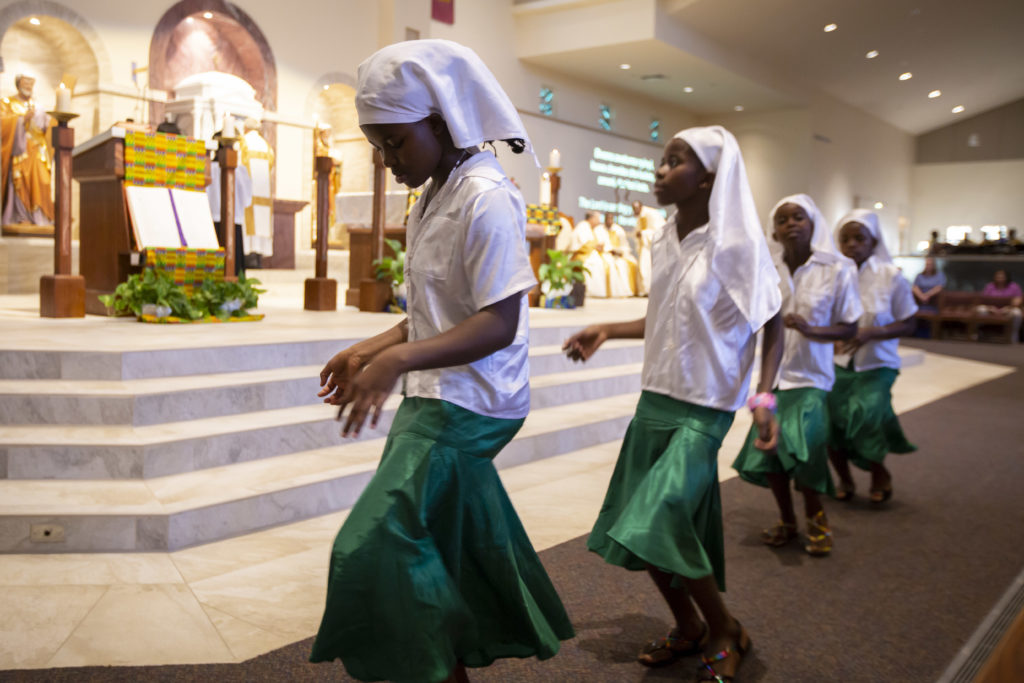 “Keep in mind, the queen’s English is taught over there,” Welton said. “Assimilating into American slang and pronunciation is not easy. Most of these priests speak multiple languages.”

“I took the time to listen to the cadence of their voices and had no problem with them at all.”

Currently, there are 26 African Catholic priests serving in the Phoenix metro area, including 14 from Nigeria, five from Ghana, three from Uganda, three from Tanzania and one from South Sudan.

Why are so many coming from Africa? The answer is mostly in the numbers.

The Rev. Aniedi Okure, who gave the keynote address at the conference, noted:

“The percentage of Catholics who hail from Sub-Saharan Africa has jumped from less than 1 percent in 1910 to 16 percent in 2010.” Not only that, but a “staggering number of African Catholics, religious, priests and homegrown vocations” exists, he said. The continent that once received scores of missionaries from across Europe is now sending missionaries forth.

The four-day gathering of African clergy in Chandler focused on a theme of “A Global Church in a Globalized World: The implications for the Church in Africa.”

Meanwhile, Kwesi, owner of Jollof King, the new West-African restaurant in nearby So. Tempe, says he hopes the eatery’s menu will introduce area diners to a cuisine they may not have tried before. From okra stew to fufu and banku, Jollof’s offerings are yet another glimpse of globalization’s impact on residents of West Chandler and So. Tempe.