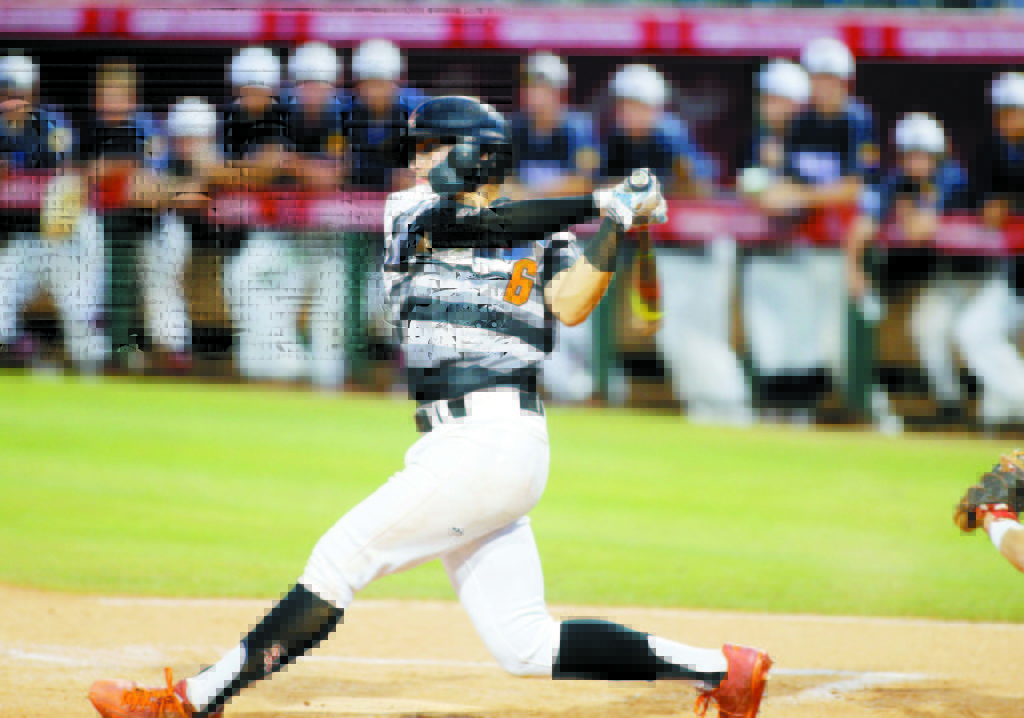 Senior Matt Novis, recently named MVP of the AZBCA 6A All-Star game, is a multi-talented baseball player who helped the aztecs win 22 games this spring as both a pitcher and outfielder. He also scored 25 runs on 36 hits with 26 RBI’s and a .462 batting average.
Photo courtesy Kris Cartwright

Nuneviller, who is known for her versatility and heart on the indoor court, will take the additional skills she learned on the sand with her when she plays at Oregon this fall. But first, she will be playing on the U.S.A. Volleyball’s Junior National team for her third straight summer.

Nobel, only a sophomore, has two years to decide whether she will pursue an athletic scholarship in the traditional indoor sport or beach volleyball.

Both players were part of the team portion of the Division I State Beach Volleyball Championship where Corona’s five teams of two players each competed.

Corona entered the tournament as the No. 7 seed but easily defeated No. 10 Coconino, 5-0 on April 24 in the first round and No. 2 seeded Salpoint Catholic 4-1 in the quarterfinals.

The Aztecs had a touch-and-go battle against No. 3 Millennium before losing 3-2 in the semifinals on May 1 at Mesquite High School.

The Aztecs, on a 12-game winning streak, won the Central Region title ending the regular season as the No. 2 ranked team in the 6A Division.

As the No. 2 ranked team, Corona received an automatic bid into the 6A state baseball playoffs. What that meant was they did not have to play in the Conference Play-In Tournament April 25 which is meant to be a reward.

Unfortunately, an automatic qualification with eight days between games, was not a good thing for the Aztecs who ended up losing, 4-2, in the first round of the 6A State Championship Tournament to Westwood on April 28.

Nothing should take away from the incredible 22-5 season this young team, with only six seniors, experienced.

Novis, playing outfielder and right-handed pitcher for Corona, was a multi-talented baseball player and team leader for the Aztecs.

As a third-year starter for the Aztecs, Novis played in all 26 games where he made eight appearances as pitcher, starting in six games. He is credited with winning all six of the games he started striking out 61 of the 169 batters he faced.

When not pitching, Novis played center fielder where he put out 32 batters and is credited with a 1.000 fielding percentage.

He was recently recognized at the Tempe All-City Awards Spring Banquet for his play in the outfield.

Novis, who has signed to play at Yavapai Community College next year, was awarded the MPV at the AZBCA all-star game at Goodyear Ball Park on May 28.

Novis was recognized for his play in the South’s 9-0 win over the North when his second hit of the game, coming in the third inning, drove in a run to give the South a 1-0 lead. Novis pitched in the final inning striking out three batters to seal the win.

Weidner played in 25 games as an outfielder where he put out 10 batters with 11 chances. On offense, he hit .219 scoring 15 runs and six RBI’s. He is credited with two homeruns and five stolen bases.

Keiffer, playing outfielder for the Aztecs in 19 games, is credited with scoring seven runs on his 11 hits earning a batting average of .367.

Ladley put out 12 batters on 12 chances while playing infielder for Corona where he earned a 1.000 fielding percentage.

The Aztecs should return 16 of the 22 players who played on this season’s 22-5 team. Several of these returning players were impact players this year and should only improve in the offseason.

For instance, Corona should return juniors Kalmer and Wyatt Berry who both played in all 26 games this season. Kalmer’s numbers were impressive batting .472 scoring 28 runs on 34 hits with 37 RBI’s and nine home runs. Berry scored 24 runs on 19 hits with 18 RBI’s and led the team with seven stolen bases.

Then sophomores Hass, Caden Verdusco and Bryan Webb had stand-out seasons as well with all three gaining valuable experience playing in 25 or more games this season.

Hass lead the team with a batting average of .479 scoring 27 runs on 35 hits and 24 RBI’s with six stolen bases. Playing in the infield on defense, Hass had 25 putouts with 43 assists.

Verdusco, playing in the outfield, put out 43 batters and had 2 assists on 45 chances to earn a .978 fielding percentage. On offense, his batting average was .388 where he scored 24 runs on 31 hits with 12 RBI’s over the season.

Webb, as a left-handed pitcher, made eight appearances on the mound starting in six games as pitcher. He is credited in winning five of those six games. Altogether, he pitched 32 innings where he only allowed 19 hits and 4 runs while striking out 28 batters.

As pitcher and while playing first base, Webb is credited with a 1.000 fielding percentage putting out 94 batters with 20 assists on 114 total chances.

Other returning players who contributed to the Aztecs success this season on and off the field included juniors Daniel Sotelo, who played in 21 games and is credited with 8 runs and 9 RBI’s and Jack Schobinger who had 12 hits and 12 RBI’s playing in 24 games.

Juniors Aaron Garcia and Matteo Baker each played in 16 games this season with Baker scoring nine runs on 12 hits with 8 RBI’s.

Ramos, one of the team co-captains and playing catcher, closed out the season playing in 23 of the team’s 24 games leading the team in batting average at .515 scoring 21 runs on 35 hits with 18 RBI’s, four homeruns and eight stolen bases.

Alyssa Matus, the other co-captain, was second with a .390 batting average scoring 17 runs on 23 hits with 21 RBI’s and four homeruns. Alyssa was also the leading pitcher on the team pitching a total of 91.2 innings striking out 71 batters.

Cornforth played 21 games mainly in the outfield for the Padres on defense and scored 10 runs on 12 hits on offense stealing three bases while Aguilera, an infielder for the Padres, played in 23 games scoring 10 runs on 13 hits with four RBI’s.

Medina, an outfielder, played in 21 games scoring 10 runs and Manheimer was a utility player for Marcos.

Other members of the team who contributed to the team’s success on and off the field were junior Ashley Torres, sophomores Ella Brown, McKenzie Peters, Tianna Rodriguez and Ariana Matus and freshman Arianna Chiago.

According to USA Wrestling, wrestling is one of the fastest growing girls high school sports in America with close to 15,00 girls participating during the 2016-2017 high school season.

It appears the Arizona Interscholastic Association was paying attention to the trend, especially since there is a growing number of female wrestlers from Arizona who participate in the USA Wrestling youth programs, because the Executive Board voted on May 21 to offer girls wrestling.

Arizona will be one of the less than 10 high school state associations who have officially sanctioned state high school wrestling championships for girls. Six states that sanctioned girls wrestling during the 2017-18 season were Alaska, California, Hawaii, Tennessee, Texas and Washington.

Girls wrestling will be offered as a championship sport in Arizona high schools starting the 2018-19 school year. This sport would be offered during the winter season coinciding with the boys program.

The season would culminate with a bracketed individual championship tournament at the same time as the boys state finals.

The details still need to be worked out and the championship brackets would all depend on the number of participants in each weight class and the number of qualifiers.

No word on whether any schools in the Tempe area would offer girls wrestling.