Noah Kutz serves with Wrangler News’ community resources staff while he attends ASU on an NROTC scholarship. He meets with civic and business groups, films and posts videos on our website and, occasionally, writes about his experiences. What follows is one such contribution.

On a typical Friday night at the close of the semester, many ASU students found themselves on Mill Avenue enjoying the night life among friends. Others might have commemorated the end of the semester with a party nearby. Some may even have stayed home to study for final exams, which were just weeks away.

One particular group of students, however, observed the end of the school year in a comparatively reserved but nonetheless celebratory way.

On a recent Friday, the midshipmen from ASU’s Naval Reserve Officer Training Corps carried on their tradition in the spirit of the U.S. Navy and Marine Corps and hosted their very own “Dining In” or, as others may know it, “Mess Night.” This much-needed break from the fast-paced lifestyle of NRTOC was an opportunity for these midshipmen, me included, to relax and enjoy each other’s company in a semi-structured dinner party abundant with Naval and Marine Corps history and tradition. 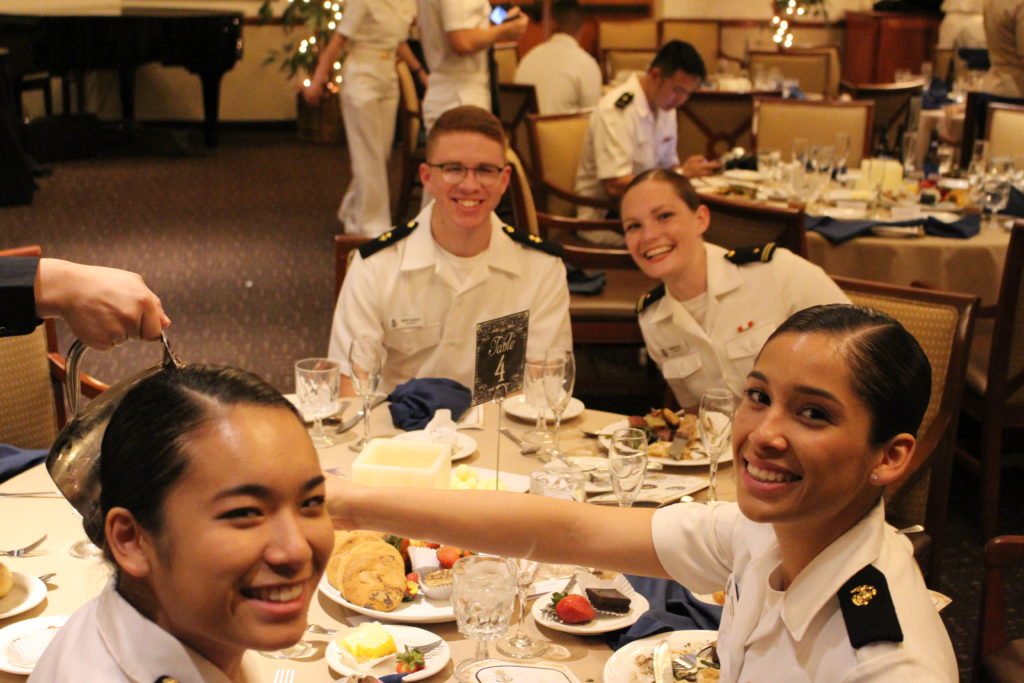 The night contained comedy, camaraderie and esprit de corps, and I could not think of a better way to boost the morale of future officers in the armed forces than a good old-fashioned Navy and Marine Corps soiree.

As described by a fellow midshipman from the unit at ASU: “It’s a time to ‘let down our hair’ and joke about crazy or funny things that have happened during the year. We have a great night with great food, which is a really good de-stressor, especially right before finals.”

Midshipman Isabella Webb is a third year student at ASU and the NROTC unit. In the months leading up to Dining In, Webb was in charge of planning and coordinating the night’s events with leading officers and other midshipmen.

When we spend so much time with one another training each day, and the stress continually builds with final exams approaching, the opportunity to come together as one entity and celebrate another year with wide smiles on our faces is one that cannot be missed.

But what is this “Naval tradition” at Dining In that makes it so different?

The traditions we celebrate in the Naval services today are derived from the humble beginnings of the continental Navy and Marine Corps. The purpose of a mess night was not only to let loose and build fellowship but to celebrate great battles and feats of heroism from sailors and Marines of old. Dining In promotes the pride and “love of the corps” that dwells within these few men and women.

Put simply, Dining In is a structured dinner party which contains a President and Vice President of the mess to maintain orderly conduct in the mess hall. At dinner, traditionally there’s an enjoyable roast beef—and a not-so-enjoyable drink concoction, containing what I thought was a somewhat sinister combination of various foods, drinks and gravies. It famously, and more commonly, is known as the grog. The grog sits on a table at the end of the mess hall waiting for its next (often unaware) partaker.

Throughout the course of the meal, everybody from lowest midshipman to highest ranking officer is subject to take part in the grog—as long as his or her fellow shipmates can find a good enough reason to send them there.

This process is known as “getting fined,” where someone must move about the mess hall in a lawyer-like fashion and dramatically present their case to the President of the Mess, who will then decide the outcome of the “trial.”

Once the accuser announces that “there has been an egregious crime committed by one of our members here tonight,” the rest of the hall chants customarily, “Say it ain’t so!”

Then, if the President of the Mess deems the accused guilty, the rest of the hall releases a collective fit of laughter as we observe the poor object of this fun-making receiving their punishment.

Fining is just one of the many customs observed on a night like this.

As crazy as it may seem, these traditions are what bring these people even closer together, and it’s been proven to build camaraderie in the Navy and Marine Corps for over 240 years. Dining In is an opportunity for the younger midshipmen, such as myself, to understand more about the Navy and Marine Corps tradition and history and strike up closer relationships with our upper-class mentors in the unit.

I am currently concluding my first year at Arizona State with NROTC, and I’m eager to see where the next three years will take me. Many people ask what it’s like to be a “regular college student,” yet still have to prepare and train to become a leader in our nation’s military. Although I have very little experience compared to some of my fellow midshipmen, I would say that it’s almost like working toward a second degree. We spend ample amounts of time training each morning, learning in the classroom and conducting more exercises and practical applications on some weekends, not to mention the various active duty summer training cycles that each class experiences.

All this for the purpose of becoming officers in the Navy or Marine Corps. The primary difference, however, is that this unit emulates a certain cohesion and bond between its occupants that is similar to that of the military. This bond, some might say, is at times stronger than family. It’s a kind of togetherness and purpose that separates us from the rest of the students, or perhaps even other ROTC units. 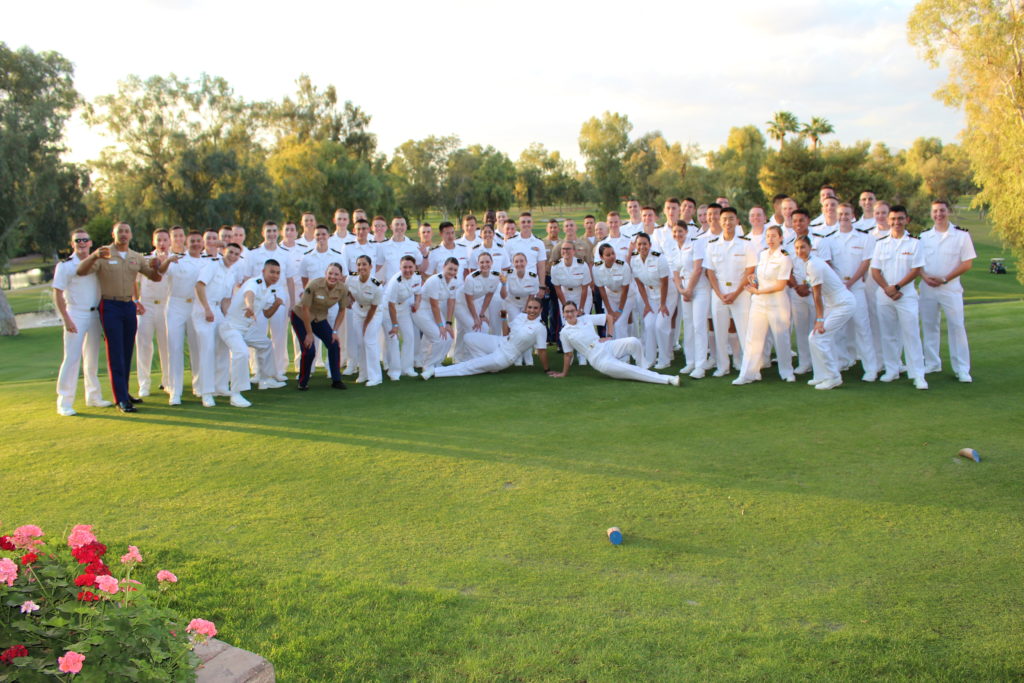 Adds Midshipman Webb, the one of the event’s overseers:

“In every class we go through similar things together, like PT, drill, Military Ball and Dining In (to name a few). Sometimes it can get really rough and stressful, but going through it with almost 90 other people makes it a bit easier.

“We can go through the program and look back on ‘that one time we did like a thousand squats’ and realize how far we’ve all come together. The military really is a giant family and NROTC is preparing us by having certain nights like Dining In, practicing the same traditions as they do in the fleet.”

Dining In is just a simple example of some of the traditions that occur within the Department of the Navy, and although NRTOC may do things a little differently, the message is still the same. We do these things because it cultivates the spirit of unity within each and every member of this corps.

It prepares us all for the time, fast approaching, when this same spirit of unity is a quality that is indispensable for leaders in the military, where unity, cohesion and companionship are vital to the execution of any task that is given