Marketing/public-relations director and designated broker for real estate superstar Michael Pollack, Patrick Cassidy sits back on the wrought-iron chair at a Tempe Starbucks and launches into a story about a woman who awoke one morning hearing her 2-year-old son screaming in agony.

“She took him to the doctor and the doctor said, ‘There’s no hope. He’s going to be in a wheelchair the rest of his life. He’ll never walk again.’ The mother refused to believe that. She prayed for over three years and the son did recover. He went on to excel at all the big sports: football, tennis, baseball, basketball, track—everything.”

Here Cassidy pauses, the words hanging between us.

“That woman was my mother and the little boy was me. I had polio as a boy.”

It’s not something anyone would guess looking at Cassidy, impeccably attired in his black button-down shirt with Michael Pollack’s corporate name embroidered in gold on the pocket.

“God’s in the miracle business,” Cassidy says softly. He was offered an athletic scholarship to Stanford University but wasn’t ready for college. “Looking back I was a blockhead,” he says sheepishly. “I loved to surf up and down the California coastline—I just loved it and decided for a break to explore other horizons.”

He married his childhood sweetheart Donna and moved to Lake Tahoe to work in the real estate business. Sky-high interest rates dashed those dreams. “No one wanted to invest and there wasn’t much surf on the lake.”

To survive, Cassidy drove a snow plow, shoveled roofs, worked as a bouncer and bartender and traded gigs in a grocery store and gas station while working with the ski patrol on weekends during the winter. Then Donna spotted a want ad for a salesman at a radio station in South Tahoe. Cassidy applied for the job, and that’s when things began turning around for him.

“The manager said, ‘Why don’t you start writing the commercials for your clients?’ I thought, ‘I can do that.’” The move ultimately led to an on-the-air career, during which he became a Top 40 DJ, spinning records. Eventually he had his own television show in the San Francisco Bay Area.

He decided to branch out toward a new horizon and form his own advertising, marketing and public relations agency.

“Things started moving fast. I became, thanks to God, very successful.” Cassidy was driving around one day looking for clients when he came upon an apartment construction job site.

“I went in to find out who is handling the advertising and here is this young kid,” Cassidy says. It was a 19-year-old Michael Pollack.

“Michael said, ‘Well, I don’t know if I can help you—maybe.’” Before the discussion got much further, a fist fight between plumbers and electricians at the job site broke out. Pollack and another man broke it up.

“Michael came back, brushed himself off and said, ‘Alright, what is it you want?’ So that was our first time meeting each other.

“Pollack said, ‘We’ve never had anyone in our 30-year history do those things for us but I’ll give you a chance. Go ahead.”

It was 1976. The friendship and the working relationship continue today.

Cassidy has designed Pollack’s brochures and began writing articles about the real estate developer and his properties. 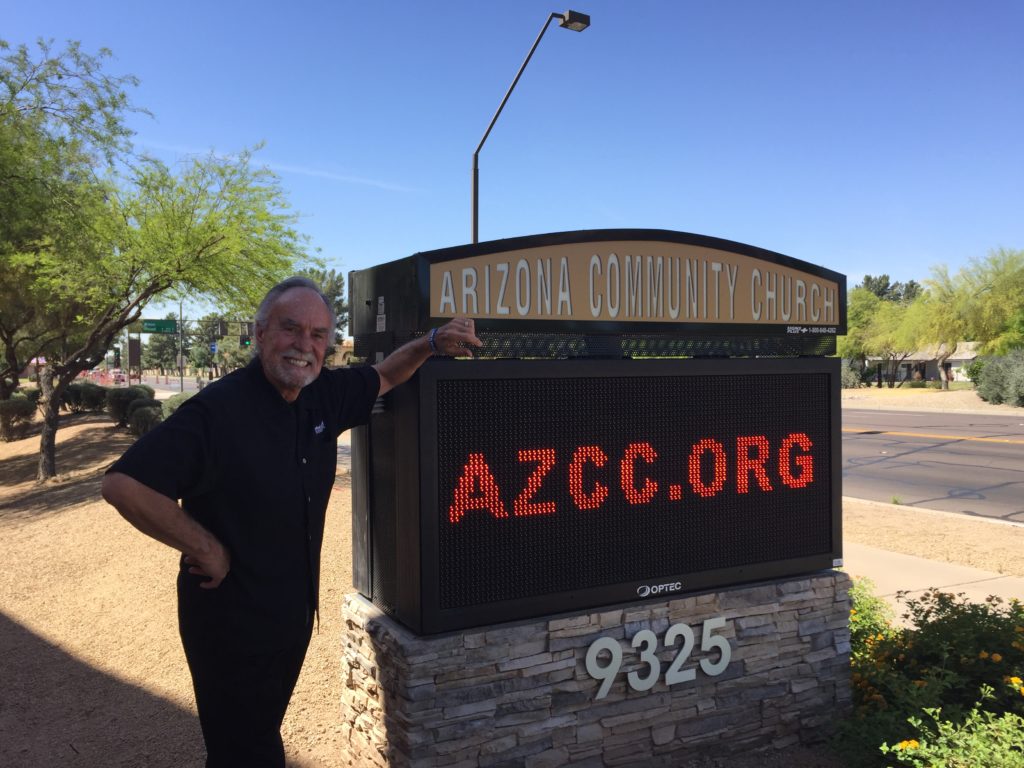 “With Michael as a client, I became, with God’s guidance, very blessed,” Cassidy says. He began taking on new clients: athletes like NFL San Francisco 49ers quarterback Joe Montana and entertainers such as the Osmond Brothers, Evel Knevil, Peggy Fleming, Wolf Man Jack, Bob Hope and Dick Clark. A segue led to purchasing four Rolls-Royce limos and offering renters a chauffeur-driven experience some only dream of. “Unfortunately I got over-extended, and later sold my businesses, limos, Porsche, home and material stuff, “Cassidy admits.

That’s when Pollack invited him to work on a project in Houston. It was there, in the heart of Bible Belt territory, that Cassidy’s took on a greater purpose.

“I was searching for a new beginning, and while my family was back in California, I was living in a small motel room and missing my family terribly,” he says. One Sunday morning he sought out a religious service and walked into a packed church assemblage. There were only two seats left and they were right in the front row.

“I had never heard preaching like that in my life, and a change I discovered came with a deeper sense and purpose through Christ.  My life changed forever.”

In 1996, empty nesters Cassidy and wife Donna moved to Arizona and continued to represent Pollack. He also joined Arizona Community Church in South Tempe, where one day in 2002 he was invited to go on a mission trip to Spain.

“My first thought was ‘I don’t dig trenches, I’m not a carpenter, plumber or an electrician, and I don’t like ladders. So what am I going to do?’”

The man persisted, telling Cassidy all he had to do was tell people what miracles God had done in his life. Today, Cassidy’s planning his 17th mission trip and chairs ACC’s mission committee. He’s been to Russia, Bulgaria, Brazil, Peru, Bolivia, Chile and other developing nations around the globe. In September, he’ll journey to Ecuador.

Cassidy’s eyes begin to moisten when he explains the importance of encouragement and support from those such as his wife Donna, Michael and others on the importance of the travels to reach and experience the graciousness of the impoverished families he and his team visit.

“They might have only one chair, dirt floor and one light bulb but they will invite you into their small dwelling and into their hearts to make you feel so honored.”

“We’re the ones who get the blessing,” Cassidy says.