Police officer training to get a 21st century remake

Although studies show that Chandler is getting safer, the city’s police chief knows that his officers go into their community each day on streets that seemingly are more challenging, more unpredictable—more dangerous.

And while overall crime rates are down, the Chandler Police Department, with Sean Duggan at its helm, is in the process of constructing a new state-of-the-art training center to help prepare officers for the challenges they face, both now and in the future.

Located at 3500 S. Dobson Road, the new facility is in fact an add-on to the Chandler Fire Department’s already-existing training center. According to Chief Duggan, this was an ideal situation for the city since the police and fire departments will be able to share some of the facilities like the auditoriums, classrooms and weight room.

The plan for the new facility is divided into two phases. Phase one, which is under way right now, includes these shared spaces as well as offices for training and support staff at the center. Duggan says that this phase will be completed at the end of June.

In phase two, a new firing range will be constructed starting in October. 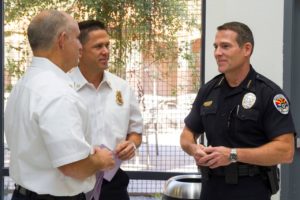 As to how this new facility will help his officers improve their skills amidst a changing landscape of criminal threats, Duggan was clear that although the overall crime rate is down in Chandler, officers still have to prepare for unique threats that have become more common nationwide recently, such as the mass shootings in the past year in Florida and Las Vegas.

“Just a few years ago, it was unimaginable to think that police officers would be engaged by snipers and active shooters. It’s just a relatively new phenomenon.”

Another advantage of the new, centralized facility is that it will help the Chandler Police Department attract high-level outside training to keep the officers up to date in the latest policing tactics—training Chief Duggan says Chandler will be happy to share with other Arizona police departments.

“If we brought in an instructor on a particular topic, whether it’s accident reconstruction or crisis intervention training, we would have the space to accommodate not just our folks but others as well.”

While the firing range will be ideal for training officers to respond tactically to active shooter and even sniper situations, Chief Duggan is quick to clarify that this is just one component of a holistic approach to training, another one being training in de-escalation and responding adequately to threats based on variables such as mental health.

While the latest training is important for police officers, Chief Duggan says that citizens play a crucial role in reducing crime, particularly when it comes to property crime and domestic violence.

As far as property crime, Chandler has seen a net decrease. Since most residential burglaries are unforced, Chandler police have spent the past year emphasizing to residents the importance of taking the most basic of precautions like locking their doors and closing their garages, an effort Chief Duggan credits with reducing property crimes.

While overall crime is down in Chandler by 3.8 percent, he says, there has been an increase in aggravated assault, 30 percent of which is driven by domestic violence cases. While more complex and serious than property crime, Duggan is confident that through utilization of community outreach and education, Chandler can make victims feel more assured when reporting these crimes so that the police can respond accordingly.

“There’s no community immune to domestic violence. We just want to make sure that victims are comfortable and confident that when they do come forward and report that we are going to provide them with assistance.”

Jonathan Coronel
Previous articlePrint Edition – May 5, 2018
Next articleHudson Elementary’s ‘exclusive’ hair salon: For a confidence boost, ‘do’ drop in