Corona del Sol students were among the thousands of those who traveled to downtown Phoenix to join in the #RedforEd march that inundated the state capitol complex.

When teachers walked off the job for five days, their actions attracted the attention of legislators, the governor, national media and most importantly, students.

With no class in session and a bit of extra time on their hands, three seniors, who normally attend Corona, participated in the march.

“One of my teachers told me that it will be an experience that you’ll never forget in your lifetime,” said Nikki Dull, who aspires to be a high school English teacher.

She says she supports the #RedForEd movement and pay increases for teachers, “so they are paid what they deserve; but, I also would like to see funding increased for students.”

After graduation in a few weeks, she plans to attend community college for two years and then transfer to Arizona State University to complete her degree.

In high school, she has been in the journalism class all four years along with Jake Pyatt and Olivia Miller, who also have plans for college after graduation and attended the teachers’ march. 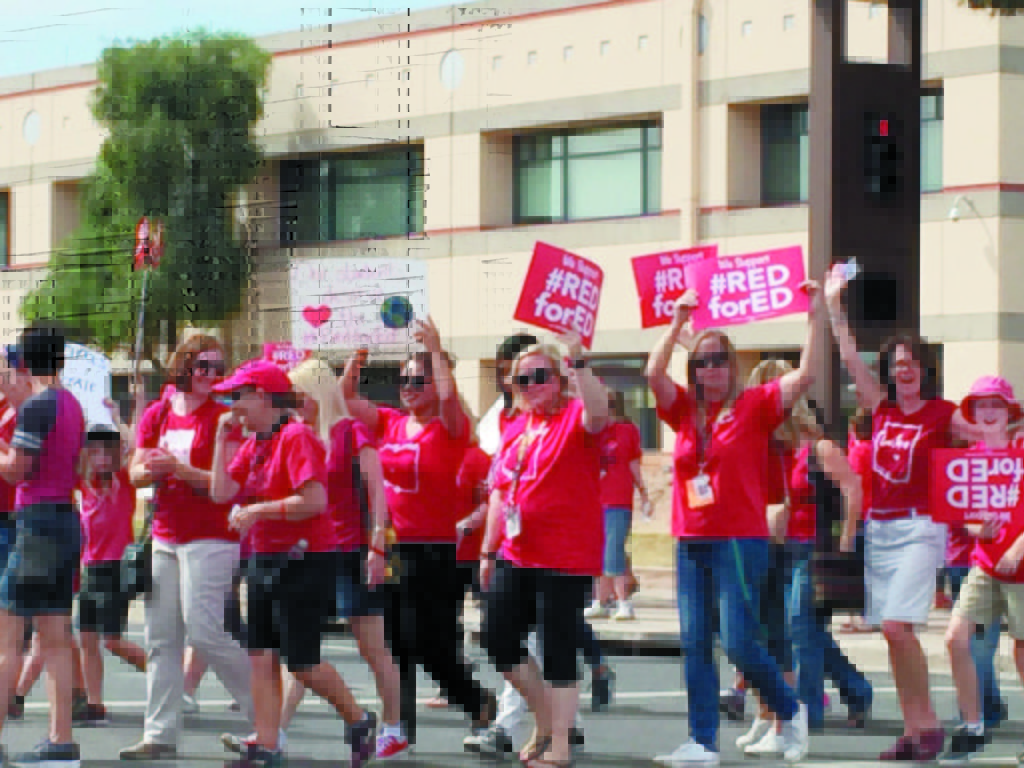 Jake, who will attend University of Arizona, says while marching down the streets of Phoenix with teachers, he felt that they exhibited “great spirit and demonstrated their good intentions, which reduced any criticism aimed at the walkout.”

“It wasn’t an event filled with anger.  It was just a lot of people who were making their voices heard for the right reason,” said Jake.

“It was such an incredible experience and astonishing to see more than 50,000 educators and students unite behind one common goal and stand up for what they believe in.

“I completely supported the walkout because I feel that our teachers and support staff deserve better,” Olivia said.

She says that a number of her teachers have made a big impact on her and that marching was the least she could do to help their efforts. Miller is a serious softball player who’s enrolled in ASU to study engineering management in the fall.

With student and public support in their favor, #RedForEd leaders determined that classes would resume last Thursday, after five days off the job—even though all their demands have not been completely hammered out with the legislature. But, what they did accomplish is awareness of their wish list.

Compensation for teachers and certified staff, along with competitive funding for all classified support staff is the core complaint of the protests, as well as ensuring adequate funding for classroom aids and learning materials, which some claim are woefully outdated.

While the governor agreed in theory to the 20 percent increase in compensation over a three-year period, no permanent funding source was identified; rather, the proposal still relies on projected increases in state revenue. 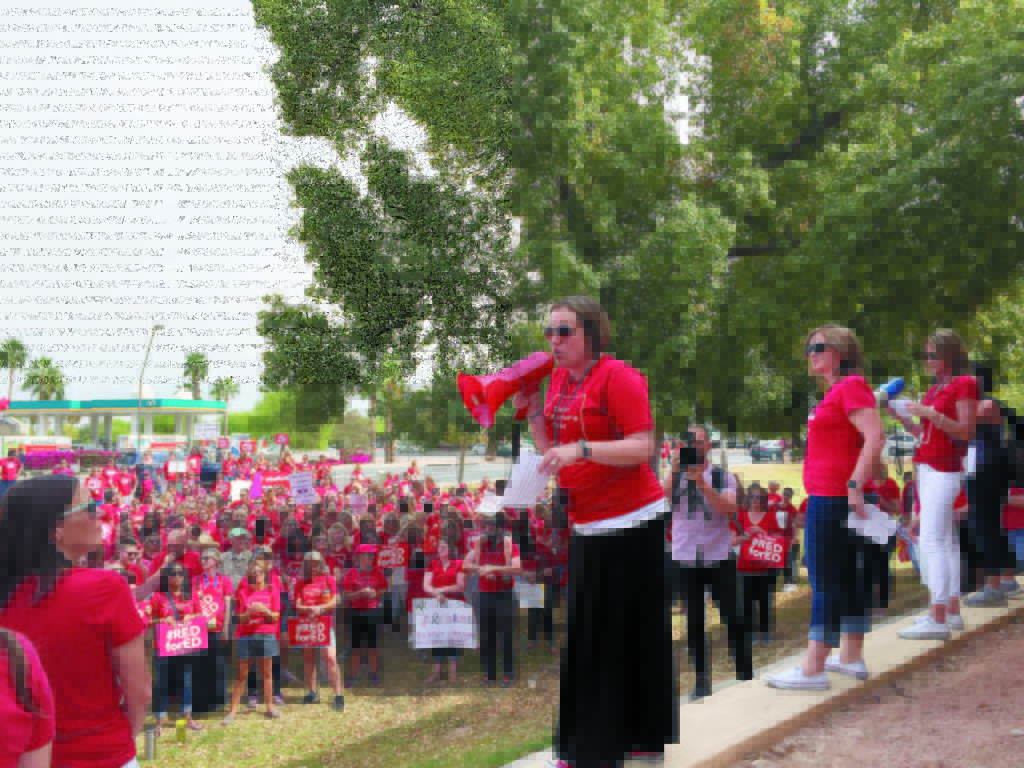 The Arizona School Boards Association continues to monitor the budget meetings between the legislature and the governor’s office and they released this statement:

“An appropriation of approximately $305 million will be added to support level funding to teachers’ pay for FY19, which is based on a projected revenue growth of the state’s economy at 4.3 percent or $224 million. The balance of the funds would come from other efficiencies in several state departments.”

As this is a budget that is still dependent upon growth and not a dedicated permanent fund source, it’s unclear if this will be accepted by the #RedForEd movement.

In another development last week, the AZ Center for Economic Progress, a progressive public policy group led by David Lujan, filed an alternative solution, which is an initiative measure to increase the income tax on upper-income earners to further fund teacher and classified staff raises.

The campaign’s supporters from the AZ Center for Economic Progress estimate the proposal would generate $690 million annually in new revenue and would serve as a permanent funding source for education. The initiative designates 60 percent of new funds for teacher salaries and 40 percent for district and charter school operation and maintenance expenses.

Ballot initiatives require a specific number of signatures by July 5 to qualify for the mid-term election in November, which is likely to happen says Dick Foreman, president of the Arizona Business and Education Coalition.

“RedForEd is an organic uprising that could lead to positive change in the state for education, as long as a dedicated revenue stream is identified,” said Foreman.

“Governor Ducey is offering a bold plan to improve education, but we can’t just bank on our economy to remain robust. We need funding that is consistent and permanent.

“The proposed initiative to increase personal income tax for wealthy individuals is one idea, but there are other revenue streams that could be also be identified and used. Arizona is a resource rich state and it’s up to residents to do more to support education.”

Other states including Oklahoma, Kansas, Nevada, Minnesota, and Utah all have passed various tax increases in recent years to re-invest in public schools. 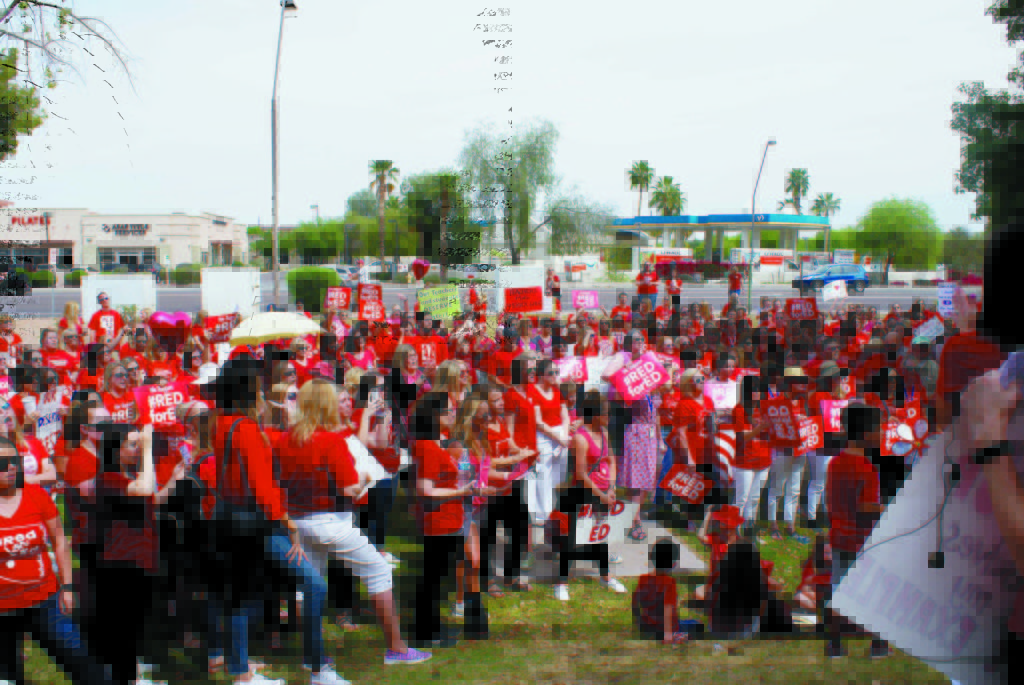 In Tempe, at the Kyrene District, Superintendent Dr. Jan Vesely, said during the last governing board meeting that she supports the teachers demands; but, at the same time, she realizes the hardships for families caused by closing the schools.

“I am fully endorsing the message that public education in Arizona is at a critical juncture. Without adequate funding for the classroom, we are unable to ensure that every child across the state has qualified teachers and instructional resources they need to deliver quality results.”

In a follow-up telephone conversation, Vesely expressed her gratitude to residents who have supported the district during this challenging time.

“We are very fortunate that the Kyrene community is incredibly supportive of education,” said Vesely.

“Within the Kyrene budget, nearly 88 percent is already used for compensation; so, teachers want raises that are added into their base salaries so that they can also earn cost-of-living increases.

“We want money for schools to be restored to pre-2008 levels, which is when the recession hit Arizona. Since that time, schools have lost nearly half their per-pupil funding and for years teachers’ salaries were frozen,” said Vesely.

According to AZCentral.com, in the decade since recessionary times, Arizona legislators have cut public education funding by $1 billion.  Previously, the state spent $924 more per student than it will in 2018.