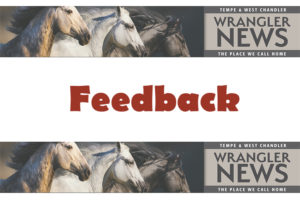 We welcome your comments and opinions via email to editor@wranglernews.com or on our Facebook page. Commentary may be edited for length, clarity or suitability. Opinions expressed are those of the contributor.

I support Robin Arredondo-Savage for Tempe City Council. I have had the honor of knowing Robin since her days on the Tempe Union High School Governing Board, more than a decade ago. It’s there, I began to appreciate her honesty in addressing questions and concerns as well as her ability to unify stakeholders for a common goal.

Since then, she has used these strong leadership skills during her two terms on the city council. She bridges gaps and puts people over partisanship. She understands the importance of considering different perspectives as well as the impact on our tax dollars when finding pragmatic solutions. Furthermore, she understands her role as a city council member and stays focused on these responsibilities.

Robin has remained true to her roots in education. Being raised in a family of educational professionals she has a deep understanding of the changing needs of students. With higher education becoming more and more of a necessity, she created and expanded the COLLEGE CONNECT Program. This much- needed program hosts workshops and trainings for high school students to navigate through the college application process.

Robin loves Tempe and she wants only the best for this city. Please join me in voting for Robin Arredondo-Savage so she can continue to be our voice on the Tempe City Council!

In support of Adams

People are busy, I understand, but it is truly imperative that citizens learn who the candidates are for Tempe City Council. When elected they will affect your household budget and city standard of living.

There is one candidate that stands out, in my opinion, Jennifer Adams.Why? Because after meeting Jennifer Adams multiple times, my assessment is that Jennifer is smart, confident, qualified, experienced, a listener, and she cares about the future of our city, Tempe.

At no other time, have I been so worried about Tempe’s future. Jennifer Adams understands that Tempe must develop a long term vision of what it is to become. She understands that Tempe is made of diverse neighborhoods, each with its
own character and charm. Ms. Adams wants to empower these neighborhood residents to choose their own destiny, rather than have a destiny chosen for them.

Jennifer Adams also is a supporter of small business and has received recognition from the business community through endorsement by the Tempe Chamber of Commerce. She has a sincere appreciation for fiscal responsibility in establishing and meeting budgets.

Ms. Adams also recognizes that Tempe, like many cities, is faced with aging infrastructure that has gone too long without repairs. Jennifer’s budgetary experience and former employment with the city makes her uniquely qualified to create a map forward to improving roads, water, sewers, trash, green areas, and parks so that residents can once again enjoy living in Tempe.

Jennifer Adams possesses those leadership skills that can strategically move Tempe towards a promising future. I hope you join me in voting Jennifer Adams for Tempe City Council.

There’s been a lot going on in the City Council campaign. But I know my neighbor and friend Jennifer Adams well, and I want to share with you why she gets my vote, and why you should vote for her too.

Jennifer is a fabulous neighbor, helping the kids with their horses, sweetly grooming and tending to her own horses, volunteering for neighborhood events and activities, and actively participating in our book club. She is a decent person, a caring person who demonstrates her devotion to her spouse, her kitties, her golf mates and her community routinely. But she is way beyond an ordinary, everyday gal.

She has skills and knowledge from her many years working for the city that would enable her to immediately make a difference. As a trained therapist, counselor and advocate, she understands how to manage group dynamics as well as collegial relationships, valuable for establishing herself. She knows every building in the City, understands our infrastructure needs, is versed in the General Plan, Master Plans for transportation, arts and culture, and city Character Areas. She knows the right questions to ask and where the resources are for answers. Understanding and managing the city’s budget comes readily to her, as she’s been managing a large budget in the city for years and is familiar with how the master budget is developed and monitored. And her upbringing taught her the values of community service, family business acumen, and devotion to the people in her life.

Jennifer Adams seeks the opportunity to advocate for and give voice to Tempe’s residents in her post-employment life. Her agenda is only what best serves Tempe and its citizens.

As a Tempe voter, it is very disturbing to me that an incumbent and her hand-picked crony are now benefitting from a “dark money” campaign via Wrangler News full-page ads. Examination of both ads reveals they are paid for by “Revitalizing Arizona/Residents for Accountability,” which according to Tempe City Clerk’s office is registered as a “standing committee (independent expenditure group) that files its campaign reports with Arizona Secretary of State, NOT the City of Tempe. Such groups also have different contribution and spending regulations than those for candidate campaigns. And you and I, as voters
in Tempe, have no visibility to their donors! Further, the law prohibits such independent expenditure groups from any contact or coordination with the campaigns of the candidates themselves, so why are they buying ads in Wrangler News? Because they want Kuby/Vega to get your vote! How hypocritical, given that Kuby recently boasted at a public forum that she was in full support of, even helped write, a proposed Charter amendment that would greatly restrict “dark money” spending in Tempe elections. She also strongly defended the council-approved tiered water rates that disproportionately penalize large lot owners in south Tempe. Find someone else to vote for is my advice, and throw this reprobate off the Council. #votingforadams

‘A leader who gets stuff done’

I know Councilmember Lauren Kuby from her work with the Tempe Community Council advocating for vulnerable populations and working families. Additionally, I have worked with Councilmember Kuby while serving on the City of Tempe’s Human Relations Commission, my work with Challenge Day in all seven Tempe Union School District high schools, and Tempe Youth Leadership.

Lauren has lived in Tempe nearly 30 years and has spent her entire life building community; in fact she leads community outreach for the School of Sustainability and has mentored hundreds of students in crafting sustainable solutions at the neighborhood level. Because of Lauren’s sustainability initiatives, I now monitor my water usage at my south Tempe home and I’m seeing measurable reductions in my water use.

Now in her first term on the Tempe City Council, she’s not content to sit back and run a passive mail campaign to ask for your vote. Instead, she is out in the neighborhoods, talking to residents about what they love about Tempe and what needs work. Because she knows homelessness is a crisis in our city, she personally took part in last month’s Point-in-Time Homeless Street Count. She walks the talk.

Lauren has put her ideas into action; working tirelessly on:

Simply put, Councilmember Lauren Kuby is a leader who gets stuff done. She is a Tempe Treasure. We need to keep Kuby on the Tempe City Council.

Outrageous. She claims to be fully supportive of Proposition 403, a measure that would Amend Tempe’s City Charter to ban “dark money” expenditures in City of Tempe elections. Why then is a dark money committee, Revitalize Arizona/ Residents for Accountability, paying for full-page ads in a small, local neighborhood publication (Wrangler News) supporting incumbent candidate Lauren Kuby in the current Tempe City Council Race. These organizations are represented by The Torres Firm, a Tempe- based consultancy doing “messaging” including press releases, brochures, etc. Also, ads in Wrangler News apparently.

A quick Google search will explain that Revitalize Arizona is “A union-backed independent expenditure committee supporting Democrat’s in Arizona’s state elections.” One statutory regulation is that such independent expenditure committees can have no connection with, contact with or coordination with the campaigns of individual candidates. I guess Kuby will respond that she “knows nothing about these ads and didn’t authorize them.” There. I’ll just say it for her. This fully exposes Kuby’s partisan background and also paints her hand-picked “ticket mate” with the same broad brush. They are partisan Democrats, very active for years in Legislative District 26, and using the platform of Tempe City Council to advance Democratic Party state and national goals. Sure, everyone involved in local politics must be registered a Republican, Democrat, or an independent, right? But when candidates are deeply involved with… and being supported by… partisans precinct, legislative or state political activist, or “union- backed independent expenditures” committees that’s a different level of partisanship. And probably not in Tempe’s best interests.

Local candidates in city council elections are limited to how much money they can collect from donors and PAC’s (political action committees, often unions). They’re even limited as to how much PAC money they can raise and spend in a local election. But Independent Expenditure Committees? They can collect and spend, from sources you and I cannot discern, as much as they wish. And they file summarized financial reports, with no donor attribution, with the Secretary of State. That’s the very definition of dark money influencing election outcomes. I don’t like it in my State and Federal elections. I certainly don’t want it in my city’s elections.

By the way, you can visit the azcleanelections.gov website to get a glimpse into how Revitalize Arizona supported (or opposed) other candidates. Including $240,000 favoring then-candidate for Governor, Doug Ducey, and $12,000 opposing Republican Frank Schmuck. Yep, it’s what they do. And they don’t have to reveal their donors to Tempe voters or even file their financial reports with the City. That’s how Independent Expenditure campaigns work. In the dark. With lots of money. To persuade you to support their partisan agenda. In a non-partisan election. Outrageous.