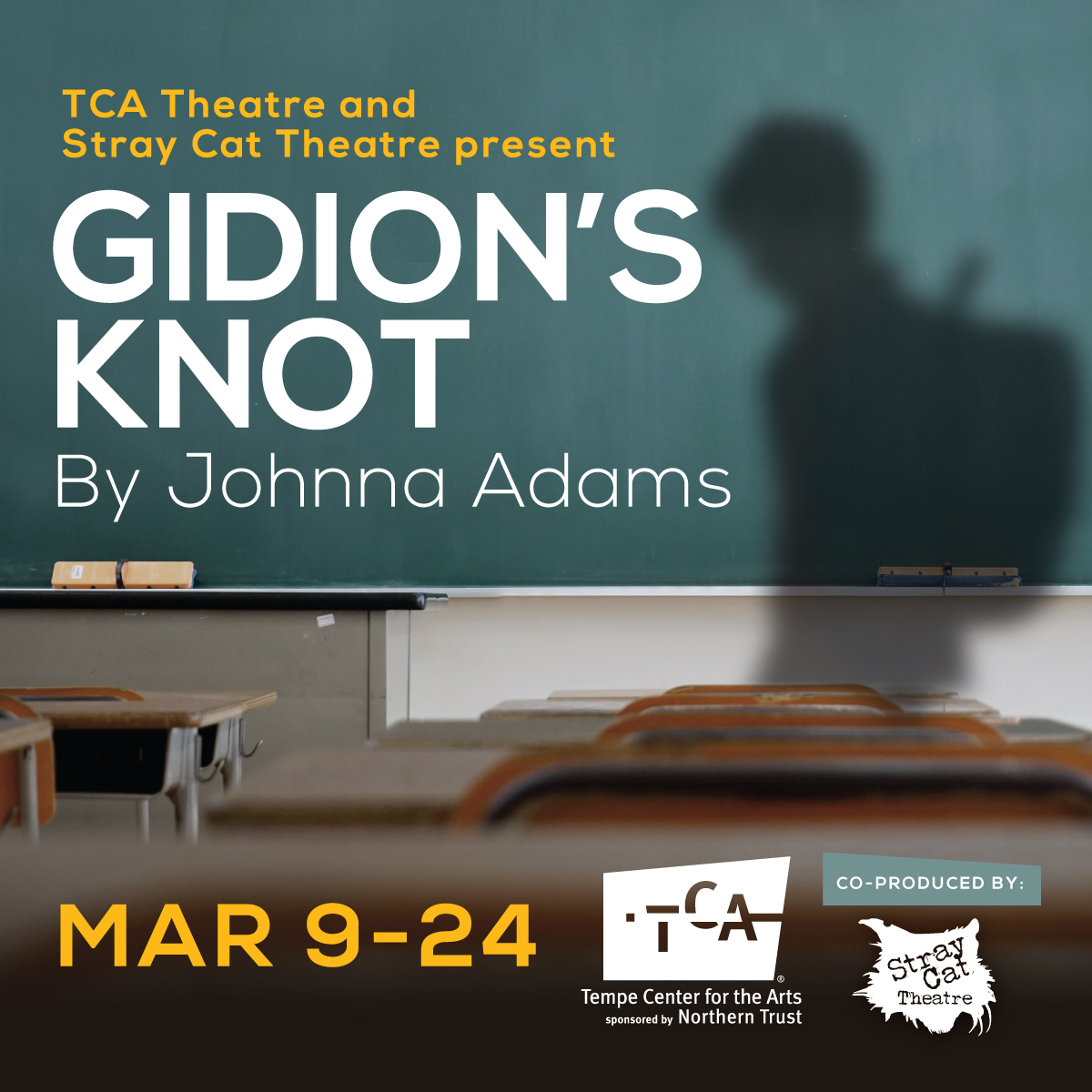 Even though it’s set in a fifth grade classroom, Gidion’s Knot is decidedly not for fifth graders, or even 6th graders. The relevance of this production, however, particularly at times like these, can’t be minimized.

Says director Tracy Liz Miller of the two-character drama by Johnna Adams, opening March 9 at Tempe Center for the Arts: “Teens. They should come.”

Otherwise, according to a pre-announcement, the show is “Not recommended for children under 13. Parental Discretion Advised.”

For audiences 13 and older, however, “It’ll be very topical,” Miller promises. “It’s a very intense 75 minutes.”

The play, a Stray Cats Theatre production in association with TCA, concerns a meeting between a mother and a teacher in which both characters struggle to arrive at an understanding of a violent incident involving the mother’s son, Gidion.

Tension builds as the two women talk and the story’s twists are gradually revealed. Recent headlines, both local and national, raise questions about whether schools are the safe places we want them to be, may make those 75 minutes all the more intense.

“It’s not going to make anyone comfortable,” says Miller of the play. “Nobody’s going to come out and say, ‘Well, that solved that problem.’ I think half of the audience might come out feeling one way; the other half might feel the opposite.”

The cast of Gidion’s Knot consists of Stray Cats veteran Shari Watts as Corynn and Alison Campbell, making her Stray Cats debut, as Heather. So, with a play written by a woman—featuring an all-female cast and directed by a woman—the show also highlights another of Miller’s passions: her co-founder role with Brenda Jean Foley and Liz Reeves Fidler of The Bridge Initiative.

This non-profit, according to its website, is “…works to identify and empower female artists in the Southwest region, with the aim of gender parity.” The group also seeks to create connections between the academic and the professional theatrical world.

“When I moved here,” recalls Miller, “I took a look around, and what struck me was the very stark gender disparity in the arts, across all disciplines.”

The Bridge Initiative (bridgeinit.weebly.com) seeks to address this disparity, through a variety of activities, including readings of plays, workshops, full productions and symposia.

“When we have 51 percent of the population identifying as female,” says Miller, “that ought to be reflected in the arts.”

Miller is doing her part with her own career. Here in the Valley she directed Much Ado About Nothing for Southwest Shakespeare Festival; she also teaches at Chandler-Gilbert Community College. Elsewhere around the country, she has directed or acted at theater companies from New York City to Vermont to Tennessee to Alabama.

She’s hoping, she says, to work next on the Tucson-based mounting of a project by playwright Elaine Romero. But first, says Miller of Gidion’s Knot, “I will mount this incredible play opening in Tempe in early March.”