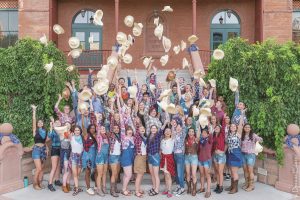 Last year posed a challenge to an organization that had been growing strong for the past 46 years. Tempe Sister Cities, one of the nation’s top student exchange programs, was thrown for a loop after changes to its highest revenue-earning event resulted in a drastic loss of funding.

Last year, organizers turned over their big event, Oktoberfest, to a new producer for its 2016 run at Tempe Beach Park.

The change in planning and oversight resulted in not only a loss of funding but in the traditional atmosphere that was substantially different from previous years, according to planners.

“It would be fair to say that last year it took a turn that was a little less family friendly,” said Mike O’Hara, one of the
event’s governing board members.

“That gets lost when you go to a paid company that isn’t really associated or attached,” O’Hara said.

“For an organization or event that took a dip like that, it’s very unusual for it to come back,” said Larry West, who has helped plan the event for years.

At the 2016 Oktoberfest, attendees were charged a $10 fee at the door, replacing what had been free admission in the past four decades.

Activities that had been planned for the entire history of the festival were taken away, which critics said may have also caused a change in the atmosphere.

Despite the potentially detrimental turn that “took the event sideways,” the organization did not have to limit any number of exchange students who got to take what most consider a life-changing trip.

Enough was held in reserve to the weather any financial setback, according to the organization’s treasurer, Peter Ewen.

“I think what it did do is reenergize some of us to think, ‘Okay,’ we’ve got to get a little bit more structure on this,” he said.

The organization took a step back to its roots in planning 2017 Oktoberfest production.
It used an improved social-media base and word-of-mouth to let Tempe folks know that the old event was
back—and better than ever.

“It was a mixed blessing, where the outcome of two years ago was not great,” added O’Hara.

“I mean it almost ruined the organization but it allowed us to then go back to the drawing board.”

Event planners said that the comments from police officers on patrol at the 2017 event indicated that there was a restored feeling of a family event.

“We brought the old band back together to revitalize the event and put it on solid ground,” West said.
Though the lasting traditions were revisited, event planners say that this event will only improve from this
point—along with careful planning to go with it.

“It really allowed us to go outside the box. There should never be a box, but we threw in a bunch of ideas and
sorted through everything, and it was literally everyone coming together and finding a way just to push it forward”
O’Hara said.